It is important to use relevant, accurate, and reliable sources in a research paper. What do you need to consider when searching for useful sources? How do you know when sources are reliable? What are some warning signs that indicate you should avoid a particular source? If biases or fallacies are part of the source material that you want to use, how do you manage this issue?

Sites which have org, .

Don't use plagiarized sources. Get your custom essay on
“ Newspaper and Credibility ”
Get custom paper
NEW! smart matching with writer

gov, .edu, as opposed to .com, are all sites that are usually credible sources.

I frequent both the University of Phoenix website and Facebook. UOP’s website is certainly credible vs. Facebook, not a credible site, which I mostly use to keep in touch with my family in California and Hawaii.Credibility with online sources is being a reviewed and published source, and example of a non-credible source is wikipedia because anyone can go in and change the sources of information.

“My space ship can fly at 1,000 times the speed of light and nobody cares.” Credibility always matters in non-fiction. Even when looking for support for an opinion, it is important to consider the source. Credibility is most important if you want people to know that you are dependable and reliable and your word is good. If you say you are going to do something,they know it will be done and it is less important if you do not care what people think of you. For example:Your car is not running and buddy one says he will be over in the morning at 9 am to fix it for you and then never shows up. Buddy #2 says he will be over at 9 am and shows up at 8:30 am with tools in hand. Now which one of these two do you want to associate with?

Advertising has a clear money-making agenda. But bias is prevalent in everyday situations, too. One way to better understand the difference between fact and opinion is to read the news in your local newspaper and then again in the tabloids. Watch what words are used in each one. See how many facts you can spot in each story. How do they differ? Demographic factors affect views toward advertising (Shavitt et al., 1998) as do endorser and corporate credibility (Lafferty & Goldsmith, 1999) and an individual’s attitude “to a particular media product within a particular medium” (Bryant & Thompson, 2002, p. 289). Attitudes toward advertising differ depending on gender, age, education, income, and ethnicity.

The attitudes of males, consumers between the age of 18 and 34, consumers with less education and income, and non-Whites are generally more favorable toward advertising (Shavitt et al., 1998).The credibility of an advertiser also plays a role in how people view advertising. Any bias that a source holds may not always be directly stated; sometimes it is implied by only presenting one side or viewpoint of a topic. Some people believe that the media controls the world; I feel this claim has merit. Many people do not question information reported on the news, because what would the media gain by exaggerating a story or only presenting one side? One must keep in mind that the media is run by ratings; sensational stories make for great ratings. This is where thinking critically can be your best ally. Even a seemingly impartial source could have a hidden agenda.

The vital factors that influence credibility of newspapers are the decline in newspaper sales, advertising, ownership of the newspaper agencies, and inaccuracy. The severe competition for magazine sales also causes magazines to exaggerate or misconstrue their stories. Other factors that can affect the credibility of magazines are the journalists. There are various genres of television programming. Television programming can vary form news to cooking shows. TV programs also exaggerate and over sensationalize their stories to grab the attention of viewers. Between television programming are advertising. “In a sense, TV programs are basically a means to get people to watch commercials” (Cyber College Internet Campus, 2007, paragraph 8).

These factors of advertising and the competition for viewers affect the credibility of television programming. Factors that influence internet credibility are trustworthiness and expertise. Does the source have good intention? Is the source honest and unbiased? Is the author an experienced professional on the source’s topic? Another factor, that influences the credibility of the internet, is that anyone can post her or his own website. They can claim that the website is trustworthy. Thus, it is vital that one evaluates the sources taken from the internet. Advertisers use various methods to persuade the public to purchase their products or services.

Advertisers know how to make their products and services appealing without sufficient information. “Advertising is designed to generate a need to buy certain brand-name products, which may be more expensive than lesser-known brands, while not being significantly better (Cyber College Internet Campus, 2007, paragraph 8).” The fact that advertising will fallaciously depict or appeal to one emotions to sell a product is the most essential factor that affect credibility.

I personally feel printed resources to be more credible. People increasingly rely on Internet and web-based information despite evidence that it is potentially inaccurate and biased. Newspapers, books, magazines, and television all undergo certain levels of factual verification, analysis of content, and editorial review, whereas Internet information is subject to no such scrutiny.

Internet sites that parallel their print counterparts, such as major newspapers and periodicals, invoke the same editorial processes as their print forms, but they constitute only a small portion of the information available over the Internet. More people are turning to the internet because it is more of a convenience factor in my opinion. I stumbled across a study conducted on the credibility of printed resouces vs.online. I found it to be very interesting. Here is the link for those that are interested. http://com.miami.edu/car/miamibeach1.htm 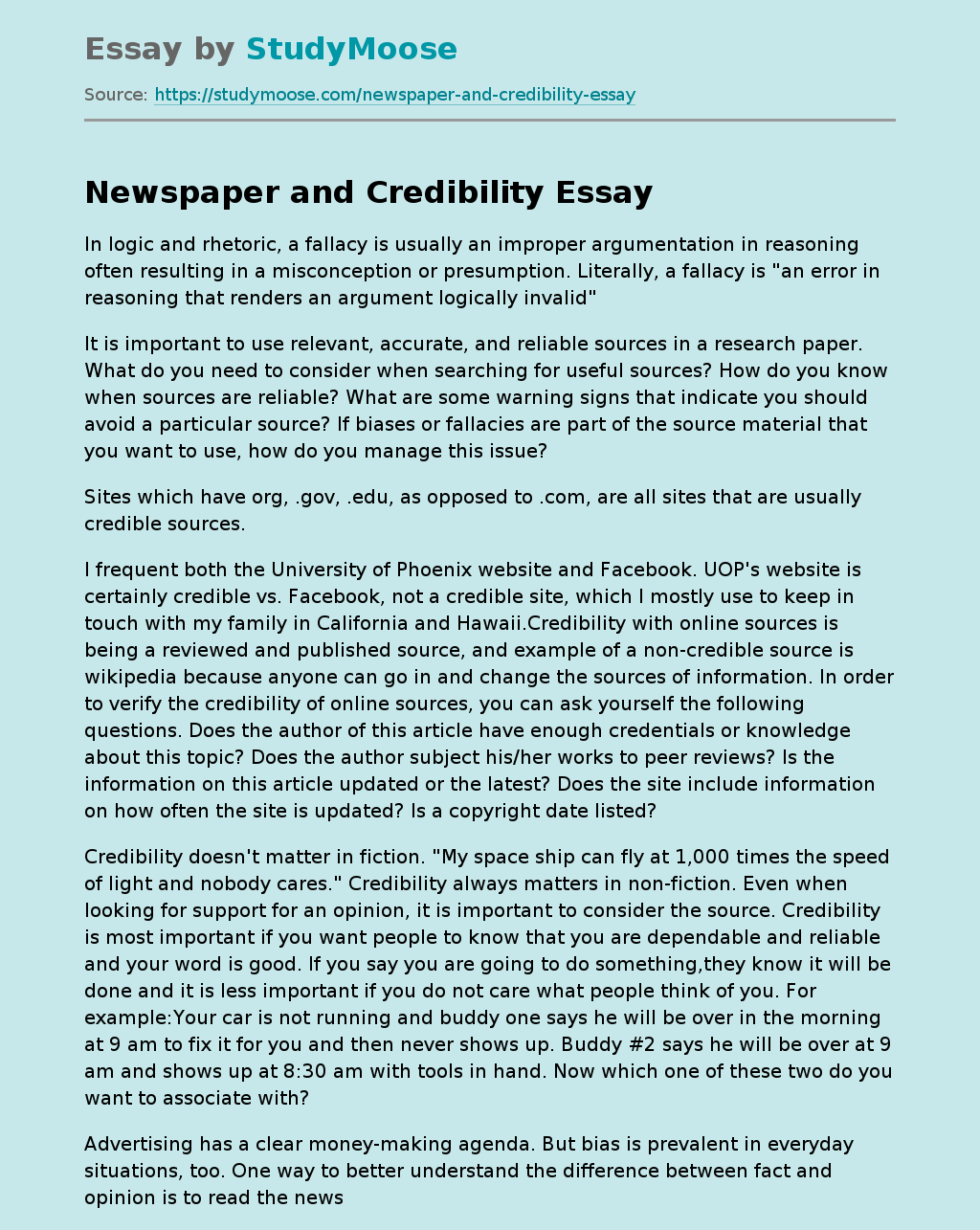