This picture is, perhaps, unsurprising considering Japan’s unparalleled technological sophistication: a reflection, in part, of the vast sums of money spent on non-military research and development (R&D). Such expenditure has resulted in innovations, such as flexible technology (robotics, numerical machine-tools etc. ), that have resulted in great cost advantages. Similarly, such expenditure has meant Japan has taken the lead in the search for a fifth generation computer which many people believe will cement it’s (almost) hegemonic status (Rosecrance, 1986, Nester, 1990, Kuttner, 1991).

Don't use plagiarized sources. Get your custom essay on
“ A new world power in a new world order? ”
Get custom paper
NEW! smart matching with writer

Additionally, strategic targetting of the service sector, combined with “an abundance of manpower with high-quality training in maths and science” (Vogel, 1986, p754) has caused massive growth in areas such as real estate, leisure, insurance and finance; an important development considering Bell’s (1974) universally acknowledged thesis concerning “The Coming of [a] Post-Industrial Society”. In fact, with regards financial services, Japan can now, justifiably, be considered a world leader (table 2)(Dicken, 1992). However, the economic dominance of Japan has been reached at the expense of significant growth in military power capabilities.

In this field the US maintains its hegemonic role, and Japan is quite happy for it to remain that way (Nester, 1990). Kurian (1991), tabulating ‘military expenditure as a percentage of GNP’, recently ranked Japan 126th out of 136 nations. Spending an average of 1 per cent of GDP on the military means that Japan is in the company of Barbados and Trinidad and Tobago at the foot of the table (Maull, 1990, Kurian, 1991). Consequently, in a table of ‘most powerful military nations’, Japan is ranked 17th out of 50 (Kurian, 1991).

Such nominal expenditure on military capabilities is the result of a US-Japan security agreement and “[its] protection under the NATO nuclear umbrella” (Kanjirathinkal and Hickey, 1992, p21; Deger and Sen, 1990). JAPAN: AN UNCONVENTIONAL HEGEMON? However, despite such agreements, the fact remains that although Japan is very strong economically, it is very weak militarily. Since proponents of cyclical international relations have all linked previous cases of world leadership with military capability, can Japan justifiably be considered the most likely candidate for hegemonic status?

Before answering this it is, perhaps, necessary to briefly examine the importance of the military in the post-1989 new world order. Authors such as Rosecrance (1986), Nester (1990), Deger and Sen (1990) and Cohen (1991) have all predicted that the role the military plays is to enter relative decline in the future. In support of their theory examples such as the arms control talks between the (ex-) superpowers, the discussions for reducing the flow of arms to the Middle East and the dissolution of the Warsaw Pact are all cited.

Additionally, their theories are empirically supported with the end of armed conflict in Angola, Cambodia, Ethiopia, Namibia, South Africa and (hopefully) Northern Ireland, as well as between Iran-Iraq and Israel-PLO (Cohen, 1991). Furthermore, the decision by many states to reduce military expenditure is also testimony to its widely regarded decline; all the historically great military powers (USA, USSR, UK, Germany, France etc. ) are experiencing cutbacks (Deger and Sen, 1990).

Perhaps one of the major reasons for decline is the removal of the predominant impetus for expansionary activity, economic independence. Rosecrance (1986) states that: “In the world economy of the 1990s….. it would be much more difficult to conquer territories containing sufficient oil, natural resources, and grain supplies to emancipate their holder from the restraints of the interdependent economic system….. For states in North America, Western Europe or East Asia, the required program of conquest is simply beyond their means.

Such an aggressor would need the oil of the Middle East, the resources of Southern Africa, and the grain and iron of Australia, Canada and the American Middle West. Too much dependence and too little strength exist to make that list achievable” (Rosecrance, 1986, p123). This quotation also highlights another issue useful in explaining the declining importance of the military: interdependence in the world economy. Fostering economic interdependence to quell potential threats has been a strategy utilised effectively by politicians for hundreds of years.

However, probably the most successful example is the European Union (Rosecrance, 1986); “The European Economic Community was created above all to prevent [another] confrontation between France and Germany. The objective was to enmesh nation states – initially France, Germany, Italy, Belgium, Netherlands and Luxembourg – in a web of economic and trading links that made conflict between them too expensive to contemplate” (Tindale and Miliband, 1991, p5). Suffice it to say that so far it has worked.

Now, in 1995, with the telecommunication revolution and voluminous economic and trading links, a globally interdependent situation akin to the EU has been created. Phenomena such as time-space convergence (Dicken and Lloyd, 1992) and the new international division of labour associated with the internationalisation/globalisation of production (Dicken, 1992), have caused a great amount of economic interpenetration and thus interdependence (Rosecrance, 1986).

The ultimate vehicle for this sort of dependency is the multinational corporation (MNC) which is “now knitting the world together economically and socially” (Cohen, 1991, p554; Thrift and Taylor, 1989, Dicken, 1992). Consequently, the frequency and intensity of conflict is likely to gradually diminish as interdependence proceeds at an increasingly rapid rate. In other words, military activity is likely to become more and more subordinated to economic processes and strategies. Luttwak (1990, cited OTuathail, 1992) already believes this to be the case.

He argues that methods of commerce are displacing military methods in international relations; disposable capital is assuming a greater importance than firepower; civilian innovation is more significant than military-technical advancement; and market penetration is a better mark of power than the possession of foreign garrisons and bases (Luttwak, ibid. ). In this sense, geo-economics is replacing geopolitics on the globl political arena (OTuathail, 1992). But what if these theories and assumptions are wrong and military power does still influence the ‘selection’ of new world leaders?

If this was the case then the future hegemon, regarding the current expenditure trends, may well be the nation that could rapidly produce high-quantities of weaponry in the shortest space of time. However, two important ingredients are required to assemble a convincing military force: capital and technology (Deger and Sen, 1991). As Kennedy (1988) states; “The world did not need to wait until Engel’s time to learn that nothing is more dependent on economic conditions than….. the army and the navy. It was as clear to a Renaissance prince as it is to the Pentagon today,…..

military power rests upon adequate supplies of wealth, which in turn derive from a flourishing productive base, from healthy finances, and from superior technology” (Kennedy, 1988, p439). Thus, even if economic interdependence does not subjugate military activity, military prowess ultimately rests upon economic grounds. Returning then to the initial question: can Japan be considered a future world leader even though it is economically strong and militarily weak? The answer appears to be that it can; the nature of the new world order is such that it appears economic, rather than military, strength is the prerequisite for hegemony.

And Japan’s economic preponderance has never been in doubt. Its closest competitior, the USA, still has a very substantial economy but this is an economy which appears to be suffering a terminal downturn and will consequently be no match for the rapidly expanding economy of Japan. Additionally, the structure of both economies is such that the post-industrial future strongly favours the Japanese who have taken a strong leadership in electronic, telecommunication, semiconductor, supercomputer and finance (etc) fields. As Vogel (1986) observes, a Pax Nipponica appears to be just around the corner. 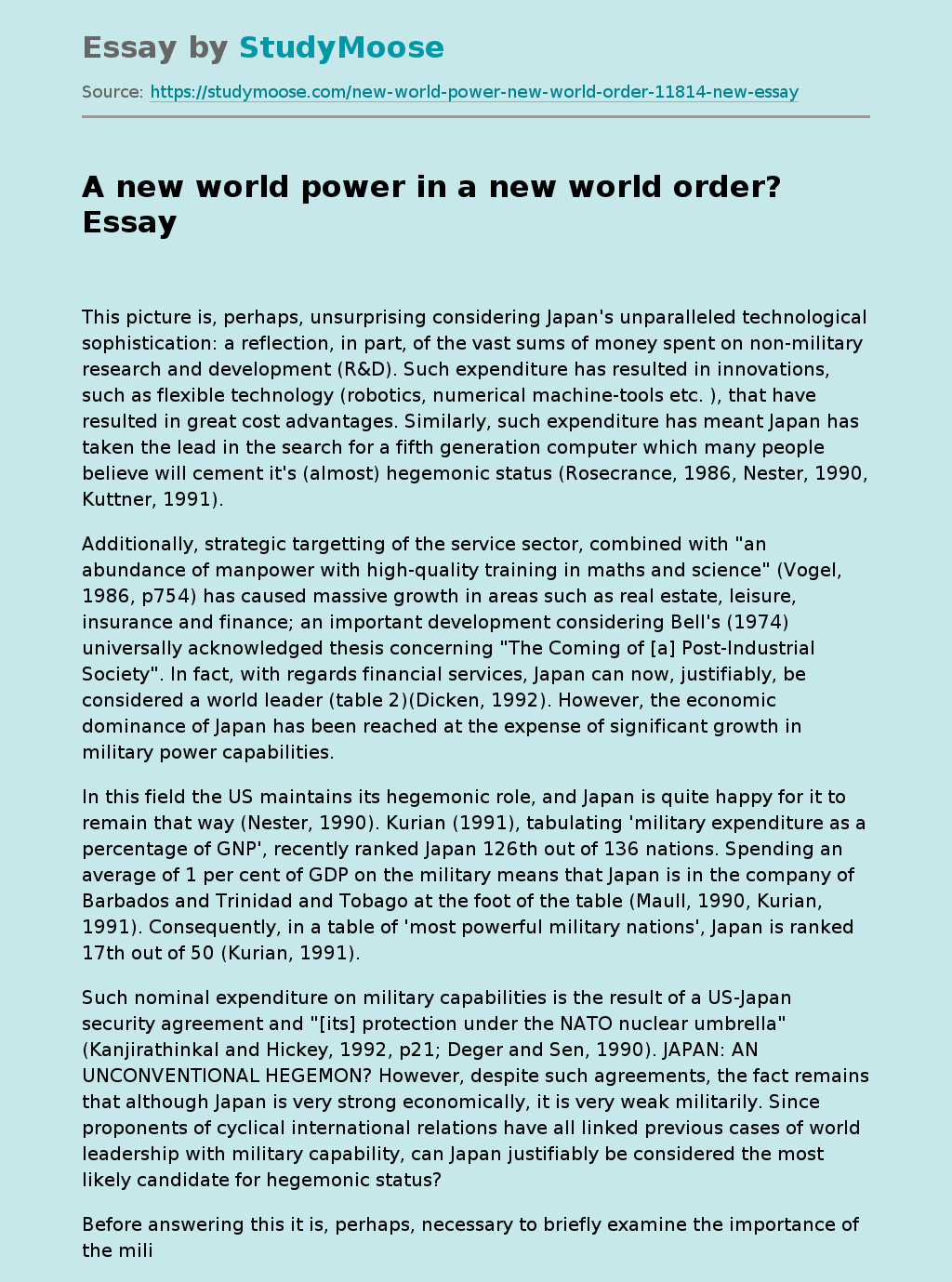