Modern businesses, organizations and enterprises outlay millions of dollars for the betterment of its computing and information systems annually. They are seeking for modern and advanced solutions to have lucrative advantages in the industry in the future. The rise is strengthened by “big data” and as well as analytical tools. The advancement of the technology has pushed the essence of business towards data driven decision making. Analyzing big data has become a major process in Business Intelligence. Many business organizations consider big data as a common practice and does continuously research on new tools and models which will help improve the business structures or models by utilizing collected sets of big data.

Don't use plagiarized sources. Get your custom essay on
“ New Trends in Big Data ”
Get custom paper
NEW! smart matching with writer

New trends and new concepts of big data are endlessly approaching the market while traditional and old technologies fade away or altered in new ways. The constant improvement of IoT provides limitless resources to big data.

What it is meant by big data is “Complex data sets that are too large for the traditional approaches and data management applications to be processed”.

Big data analysis is the collection of various kinds of data which is widely used to analyze large sets of structured and unstructured data to pull out meaningful and valuable information from them. The IoT or the concept of “Internet of Things” is one use of big data.

Evolution of the Topic

The concept of “Big Data” has stepped into a new era in the past few years along with the improvement of the technological advancements.

The diction “Big data” was cherished by the Oxford English Dictionary in the year of 2013. But the phrase “Big Data” has been circulating around as early as in the time of World War II when governments and other parties had to work with massive loads of data. Concepts on big data became more popular after the invention and development of mobile and IoT related technologies which began to produce wide sets of data generated from different areas such as geographical locations, social applications, health and fitness applications and etc. began to use and access them on their mobile devices.

As the use of data has continued growing, business organizations began to improve and expand noticeably. As those data sets grown into huge volumes, the applications which use those particular mass data sets have become more accurate and real time, those so called big data and big data processes started to move into the cloud.

As cloud computing continued making impacts to the traditional business models and the big data continued growing into larger volumes, the ones who are interested in technology such as techies, reviewers and tech investors looked out for new trends which will change the way how modern business is done by applying big data into the newest trends of businesses and technologies. From self driving cars to intelligent robots which have emotional quotient the field has expanded and will be continue expanding further more. In this report, five trends of big data concept which have business value inside them will be discussed.

Future Developments in This Area

Artificial intelligence systems require huge amounts of data sets in order to operate efficiently with reduced number of errors. In order to be intelligent, data has to be fed into the system which contains almost every possibility of behaviors. Machine learning has come a long way in the past few years. Vendors such as Amazon, IBM and Google provide access to powerful machine learning algorithms and other services. Big data becomes more approachable when the machine learning algorithm and the scalable infrastructure which is provided by the cloud are combined together. ML algorithms learn from experience over time and will continue growing. Machine Learning is very useful in the processes of data preparation and prediction analysis. As examples, Apple’s Siri and Microsoft’s Cortana are the forerunners of full scale autonomous agents which use machine learning to identify behavioral patterns of the users. In the near future, we will be able to interact with devices by speaking to an intelligent agent rather than interacting or clicking buttons and menus. Self driving vehicles are also a great example for this topic but we will discuss about it in as an individual topic later.

Cloud computing is the practice where a network of remote service are hosted in the internet in order to collect, manage, process and store data rather than executing all the processes in a local server or in a personal workstation. Simply, it delivers hosted services to the clients over the internet. Cloud computing generally provides three forms of services which are,

There are mainly three kinds of clouds which are namely private, public and hybrid clouds. Private clouds only use the resources owned by a business or an organization. It can be implemented in a local server inside a data center of a business or can be hosted through a third party cloud service provider. These kind of clouds are used by mid-size to large size business organizations which handle business critical operations that need fine control over their environment.

In public clouds, the resources such as servers, processing power and storage are provided by third party CSPs (Cloud Service Providers) who owns those services. Public clouds are used to provide services such as web based email, online office apps, storage space and etc.

Hybrid clouds are the combination of both above clouds which data and applications can be accessed and shifted between both public and private clouds flexibly with more options. As an example, a company or an organization can use public cloud for storage which requires lower security and private cloud for the most sensitive business critical tasks such as financial reporting.

The popularity of the cloud service is rising day by day. Venture capital firms are more likely to invest in SaaS companies which provide great service hence they have identified that cloud solutions will be more profitable in the trends of future. Not only venture capital companies but also lots of companies all around the world are switching from their traditional data center approach into cloud solutions in order to make profit. Companies of different scales are seeking for reduced costs, flexibility and less effort from their IT departments which are what exactly cloud solutions hand over.

Improvement in the Automotive Industry

Tesla is one of the predecessors of futuristic self driving vehicles. The “thinking” algorithms which is a machine learning algorithm of the company’s autopilot software has given the capability of autonomous driving to Tesla vehicles. Elon Musk who is the CEO of Tesla claims that all the vehicles which his company produce will be fully autonomous by this year. Tesla’s vehicles are built with the potential of one day become self driving which all the equipment are packed in them and it’s just a matter of a software update to improve the vehicle’s abilities and driving experiences as well.

All the vehicles produced by Tesla sends data directly to the cloud. In the year of 2014, an engine trouble was occurred in all Tesla vehicles which is said the components of the engine were occasionally overheating. By monitoring the collected data, every vehicle was automatically repaired by sending and installing a software patch thanks to the cloud services. This is another great example of the use of cloud (Discussed in the previous topic) in a futuristic way.

Having installed external sensors, Tesla gathers necessary driving data in huge volumes from all around the world. With the help of external sensors, Tesla effectively gathers data from its vehicles as well as the drivers. Researchers at McKinsey and Co estimate that the market value of vehicle-gathered data of Tesla will be worth $750 billion a year by 2030.

The collected data is used to generate high data-dense maps which shows real time traffic from an average increase of traffic speed over a narrow road to the hazardous areas which the driver will have to take actions. ML algorithms in the cloud takes care of the duty of educating the entire Tesla fleet one by one and edge computing makes the car decide what action has to be taken next. The Tesla vehicles themselves form in networks which connects them altogether and transfer data with each other. It is said Tesla is working with Nvidia to improve their unsupervised learning model of machine learning.

Internet of things or IoT is a combined system which physical objects are connected through the internet. The word “Thing” can actually be a person or a any other device which has his/her or its own assigned IP address. “Things” gather and send the collected data to the needed parties via the internet automatically with the help of embedded technologies. It is said that more than 10 billion of devices and sensors will be connected to the internet by the year of 2020. These connected devices and sensors will collect, analyze, process, store and share data in real time. IoT is one main source of data nowadays hence the collection of data is considerably large. Big data analytics plays a key role by collecting and analyzing collected data from “Things” or connected devices or sensors which helps initiate the improvement of decision making.

IoT processes a huge amount of big data in real time and store them using different kinds of technologies. From the big data perspective, big data is the fuel that keeps IoT running. The more IoT grows the demand will also increase on businesses regarding the capacities of big data. Sectors are moving from traditional data storage technologies and seeking for advanced and innovative solutions such as cloud solutions as the IoT generated data is increasing at a huge rate in order to balance and process the growing workload.

Benefits of the use of IoT and Big Data for companies

Big data has become an important element of present businesses and organizations. The business structures and business models automatically adapts to these new big data trends in order to gain profitable advantages in the industry. Shifting from older technologies to modern and advance solutions are very much visible and popular between competitive businesses organizations or companies. One can say that big data is a pillar which holds the businesses from one side. By analyzing collected big data, companies can measure the improvements and the advancements themselves and even predict the possibilities which can happen in the future based on the collected big data. 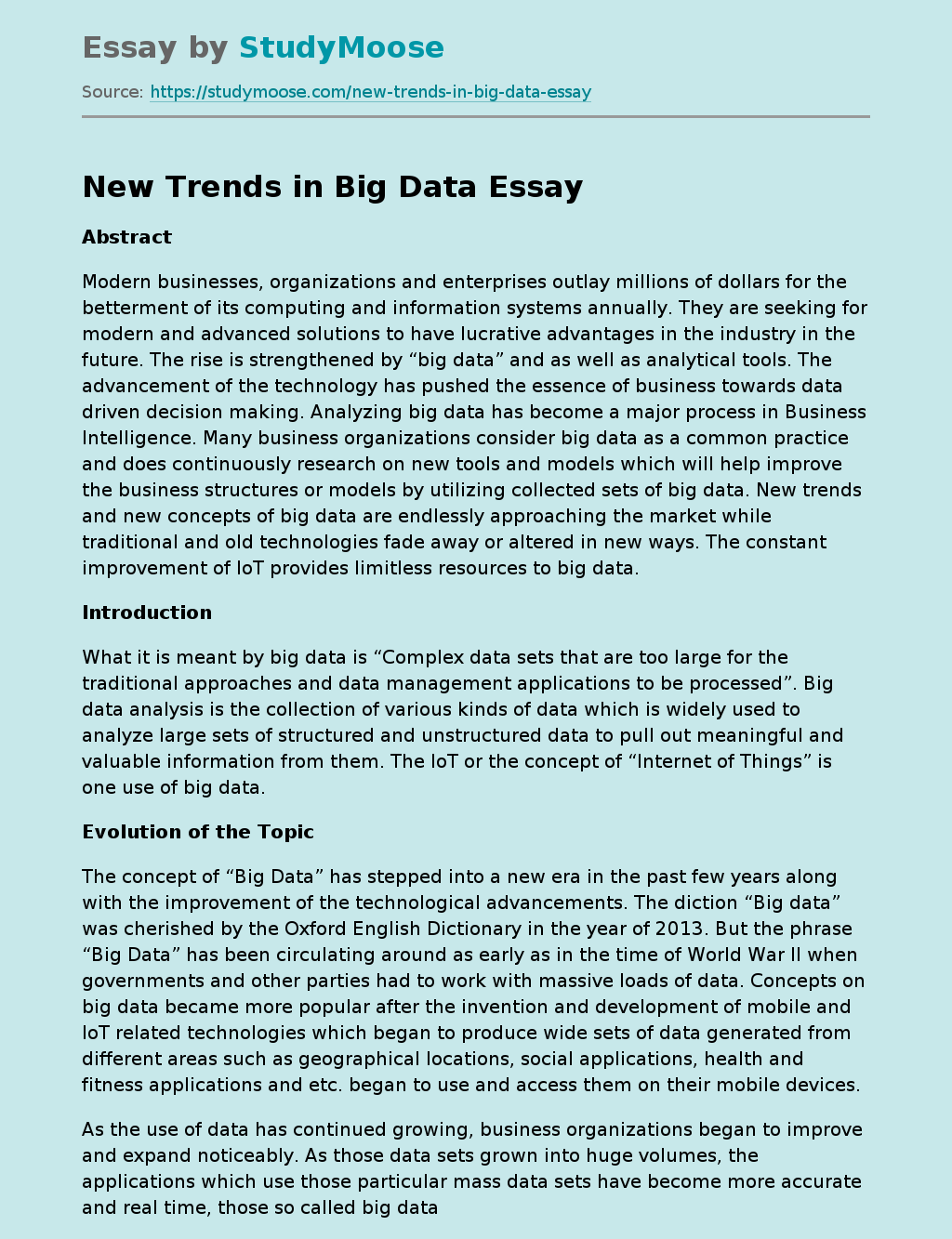