Sending messages posting someone’s pictures to defame someone, sharing negativity about someone which cause embarrassment or humiliation. It is also known as online bullying.

A few of the foremost common places where cyber bullying occurs that is:

This sort of harassment famous among teenagers or kids. New technology has a lot of benefits but some people’s are using this technology for threaten and harassing others.

Whether, others life will be spoiled whether he/she facing problems through this negativity. But those who are doing these crimes have no idea about it that how other person will face problems after this. We all ever heard these sort of dialogues atleast once in our life from others to others that you’re ugly, you’re pretending, you’re fool, you don’t deserve this ‘Kill yourself’ etc. It’s like ragging on the internet repeatedly except it happens on the internet infront of thousand peoples and because of this behavior those offensive messages Never go away, Scars that remains on the cyber bullying victims.

In our country of Pakistan sadly, no one likes to talk about solution, they don’t even like to admit that exists. There’s no punishment for this brutal crime which teenagers and millions of peoples around the world suffering from it every single day. Peoples who experiencing Cyber bulling in her/him life they go through depression that effects on mental health, Alcoholism and even in rare cases they commit suicide.

Unfortunately 99% out of 100% don’t tell anyone that they’re being cyber bullied, there were no effective solution to make them stop. It is also result in a lot of insecurities and complexes the victim which suffer from this situation worried and lose their inner peace. The adults brain is like a car without brakes, no stopping, no thinking, no pausing, they just act like they’re fully hypnotised.

In the past, there have been a lot of cases of Cyber bullying that ended with victims life by doing suicide. According to the (World Health organization – WHO) the yearly rate of suicide in Pakistan is 2.9 per 100000 peoples.

In 2018, Fashion model Anam Tanoli at the age of 26 she commit suicide after facing extensive bullying online. Before her death she recorded a video in which she said ‘Cowards’ to those bullies.

Uncountable cyber bullied cases occurred but victims don’t raise their voices because of the fear of being ashamed infront of million of people’s.

When this happened in our society or in area victims are only left with slogans and nobody supporting them, then this news spreads like wildfire and our social media make hype of it, peoples start commenting on it, they start criticizing those peoples full social media promulgate the news faster.

Always remember who you are and where you came from, pass judgements on yourself before you pass it to another. Thousands of peoples get bullied every day in school at works and behind a computer. It’s really needs to stop. 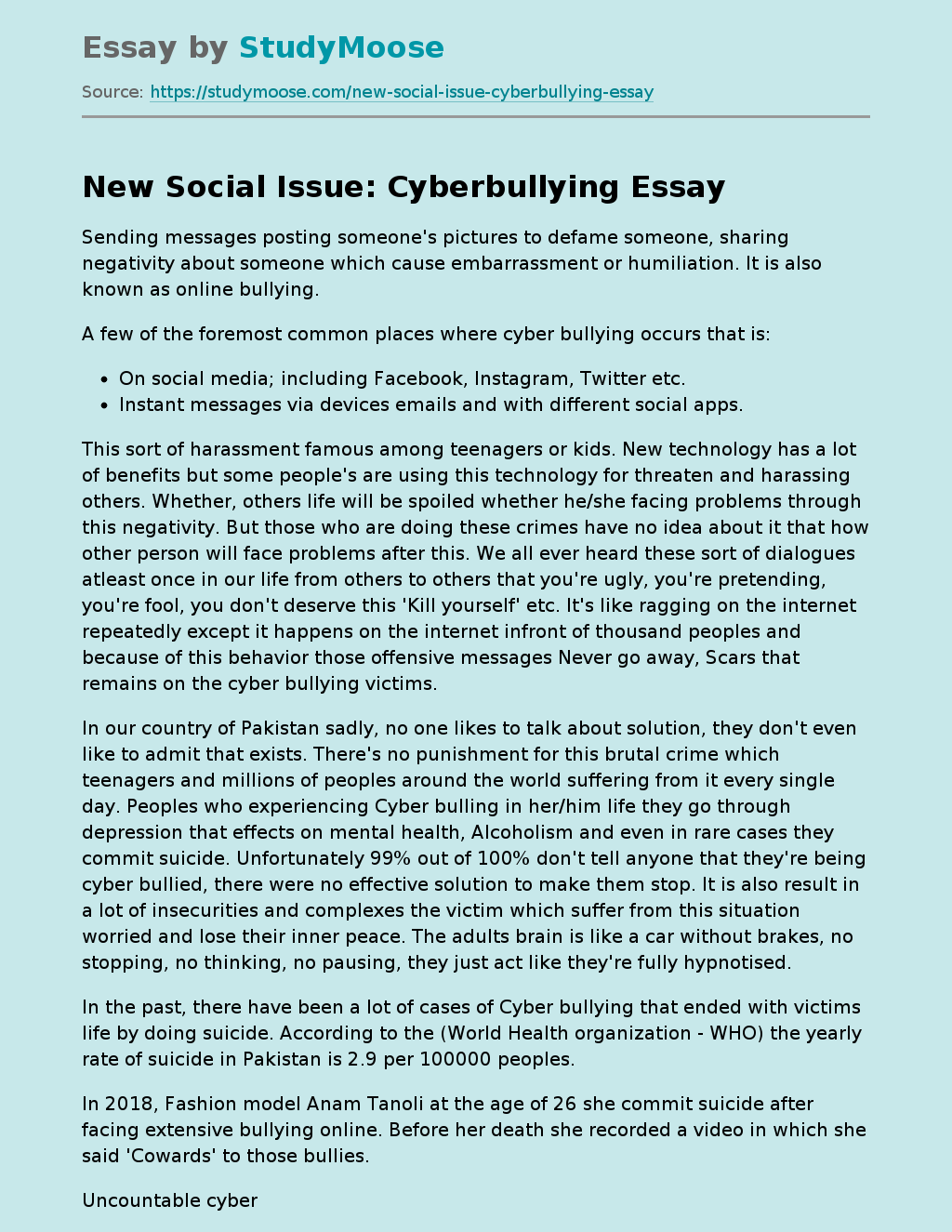