In The novel “Never let me go” about the clones, Kathy, the protagonist and narrator in the story, protect her best friend, Ruth throughout the story. Because they are grow up together in the same place. They were sharing their experiences, motions and secrets. Moreover, they just like family; she wants to protect Ruth from the smallest things. She defended Ruth when she got questions about her pencil case. When they have Norfolk trip,… and became Ruth’s carer. To keep their friendship, to be close and remember as much as she can cause they all knew that they going to donated and be complete at young ages.

Don't use plagiarized sources. Get your custom essay on
“ “Never Let Me Go” ”
Get custom paper
NEW! smart matching with writer

I was talking to one of my donors a few days ago who was complaining about how memories, even your most precious one, fade surprisingly quickly.

But I don’t go along with that. The memories I value most, I don’t see them ever fading. I lost Ruth, then I lost Tommy, but I won’t lose my memories of them”, Kathy said this at the very end of the novel.

When she became an adult, she criticizes people less and is accepting of whatever happens to her and her friends. This shows how much she loves her boyfriend, Tommy and her best friend.

She wants to keep her memories which is the most valuable and precious things to her. The first example is after Ruth expelled Kathy from her secret guard because Kathy walked off when they playing the chess game.

Then, one day, when they were in South Playing Field. Moria, who also got expelled by Ruth, said how stupid this secret guard is. Although both of them are had the same situation and experience but instead of agreeing, Kathy was completely irritated about what Moria just said. She said:” What do you know about it?

You just don’t know anything, because you’ve been out of it for ages now! If you knew everything we’d found out, you wouldn’t dare to day anything so daft! ” Then she walked away and glanced and the others. She realized that she didn’t angry with them anymore. She just felt so furious with Moria. Kathy was defending the secret guard and moreover, Ruth. Three years after Ruth to expel her from the secret guard. When Kathy notices that Ruth has a flashy new pencil case and asks where she got it, Ruth insinuates that it was a present from Miss Geraldine, a forbidden gesture of favoritism.

Annoyed by the obvious lie, Kathy suspects that Ruth actually got the pencil case at a Sale. She begins to confront Ruth about it, she said she was looking through the register book and it was quite interesting because she can see all the things people have bought. This event shows Kathy protects Ruth because then she was shock when she saw how upset and uncomfortable Ruth was. Therefore, she felt awful and regret. So she backs off by said “It’s all right, I didn’t see anything much”.

Things are awkward between Kathy and Ruth for a while after the botched confrontation. Eventually one day in art class, Midge A. uestioned Ruth where the pencil case came from; this is uncomfortable for Ruth because she must answer the question consistently, but now that Kathy knows the truth, so she also doesn’t want to continue with the lie. Kathy intervened, explained “There are some very good reasons why we can’t tell you where it came from” Kathy wanted to help Ruth to hide the truth and she started working to repair their relationship. Kathy did little things that allow Ruth to get more attention from Miss Geraldine, whom she adores. The next example is about Kathy’s tape, which is her favorite, most precious possession.

So when she lost it, it became such a big deal to her. Ruth remains begins to recognize that social relationships involve give-and-take; she fervently searches for a way to repay Kathy after the latter refrains from humiliating her about the pencil case. Ruth was asking the others if they had seen Kathy’s tape. Then Ruth gave her a tape that called Twenty Classic Dance Tunes. This shows Kathy protect Ruth because even it wasn’t the one that she lost and it wasn’t anything like Judy Bridgewater but she felt real happiness. ” And I said that, yes, it was exactly the sort of thing”.

Because their relationship was getting better and she got the tape from Ruth. She also doesn’t want to hurt Ruth’s feeling. “It’s an object, like a brooch or a ring, and especially now Ruth has gone, it’s become one of my most precious possessions. ” In chapter 9, Ruth asked Kathy to do her favor which is she wants Kathy to help her and Tommy get back together again. This shows Kathy protect Ruth because even she had a bit of doubt for Ruth’s behavior toward Tommy. She had a choice whether to help Ruth or not, however she chose to help. ”Of course, I’ll help”.

Few days later, she talked to Tommy about Ms. Lucy, Madame’s Gallery and convinced him to get back with Ruth. “We’re going to be leaving here this summer. You’re got to get yourself sorted again, and there’s one thing you can straighten on right now. Ruth told me she’s repaired to call it quits and have you get back with her again. I think that’s a good chance for you. Don’t mess it up” She also said that Tommy really lucky cause Ruth fancying on him. The last example is in the day they got to Norfolk, Chrissie questioned Ruth about the boy that she was telling Chrissie and Rodney about the days ago.

Obviously, Ruth lied to them about that boy who a couple years above her and became a park keeper now. Kathy noticed it and about to warn Tommy. But Tommy already asked with a bewildered voice:” Who was that”. Kathy responded quickly: “You know who it is Tommy”, “You’ll have to have your brains tested”. Even that Kathy knew Ruth was lying but she still helped her to hide the truth that the boy actually does not exist. She also gave Tommy a warning glance, which shows she wants Tommy to defend Ruth too. 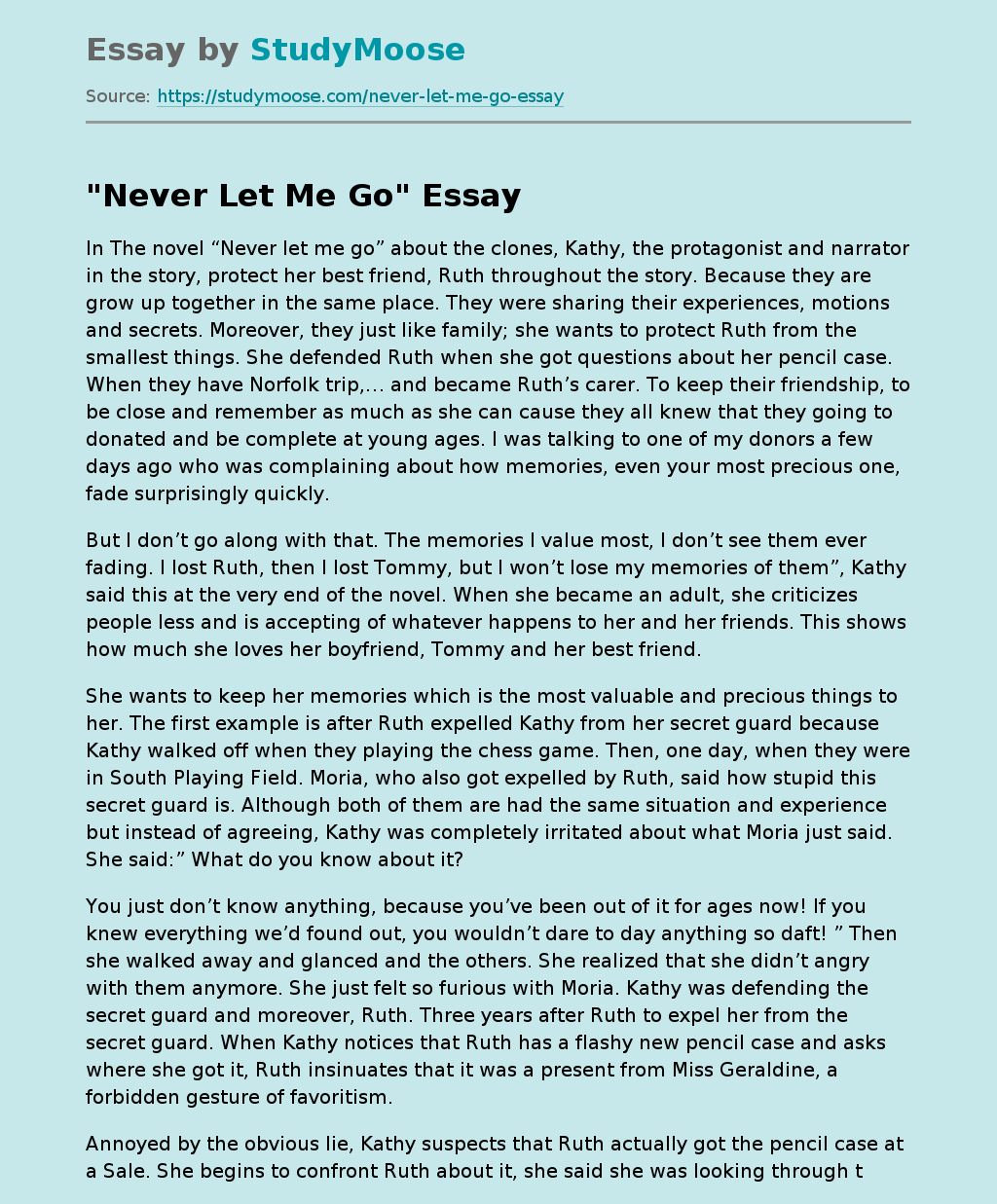