Over the past century, biological engineering has made a huge step forward. They made possible to duplicate human DNA in order to produce a genetic replicate. The novel “Never Let Me Go” by Kazuo Ishiguro in the fiction story of three friends, as the products of genetic cloning, illustrates the negative view of the human nature. This novel, through the eyes of Kathy H. , shows what it means to be a clone and what problems they experienced growing up. Clones are real humans and should be treated as naturally born humans.

Don't use plagiarized sources. Get your custom essay on
“ Never Let Me Go by Kazuo Ishiguro ”
Get custom paper
NEW! smart matching with writer

The clones were not naturally produced, but they created inside of a government lab.

These story shows that they were not considered as a humane, and were treated not as rest of the real people. They were created to increase the health of the greater population. If clones are the real people then it is wrong to donate their vital organs against their will. These clone students who lived in school called Hailsham were cut off from the world.

They were told only what they needed to know. Once, their teachers, Miss Lucy, explained to her students that one day they all will donate their organs and then die before they even became middle aged.

As naturally born humans, clones should have free will. Further, when they were fifteen years old teenagers they had dreams about future. Some of them wanted to go to America, another wanted to be actors and to be a film stars or to work in supermarkets (81).

But Miss Lucy told them “Your lives are set out for you. You’ll become adults, then before you’re old, before you’re even middle-aged, you’ll start to donate your vital organs. That’s what each of you was created to do. You’re not like the actors you watch on your videos, you’re not even like me.

You were brought into this world for a purpose, and your futures, all of them, have been decided (81). ” Real humans are brought into this world for a purpose and they have free will, not like these clones and it is not right. As a real human, clones should have a chance to choose as we all do. Later, when they were thirteen years old they were told that they will not going to be able to have babies. “Then there was the whole business about our not being able to have babies (83). ”

Conclution : The whole idea of cloning humans is wrong 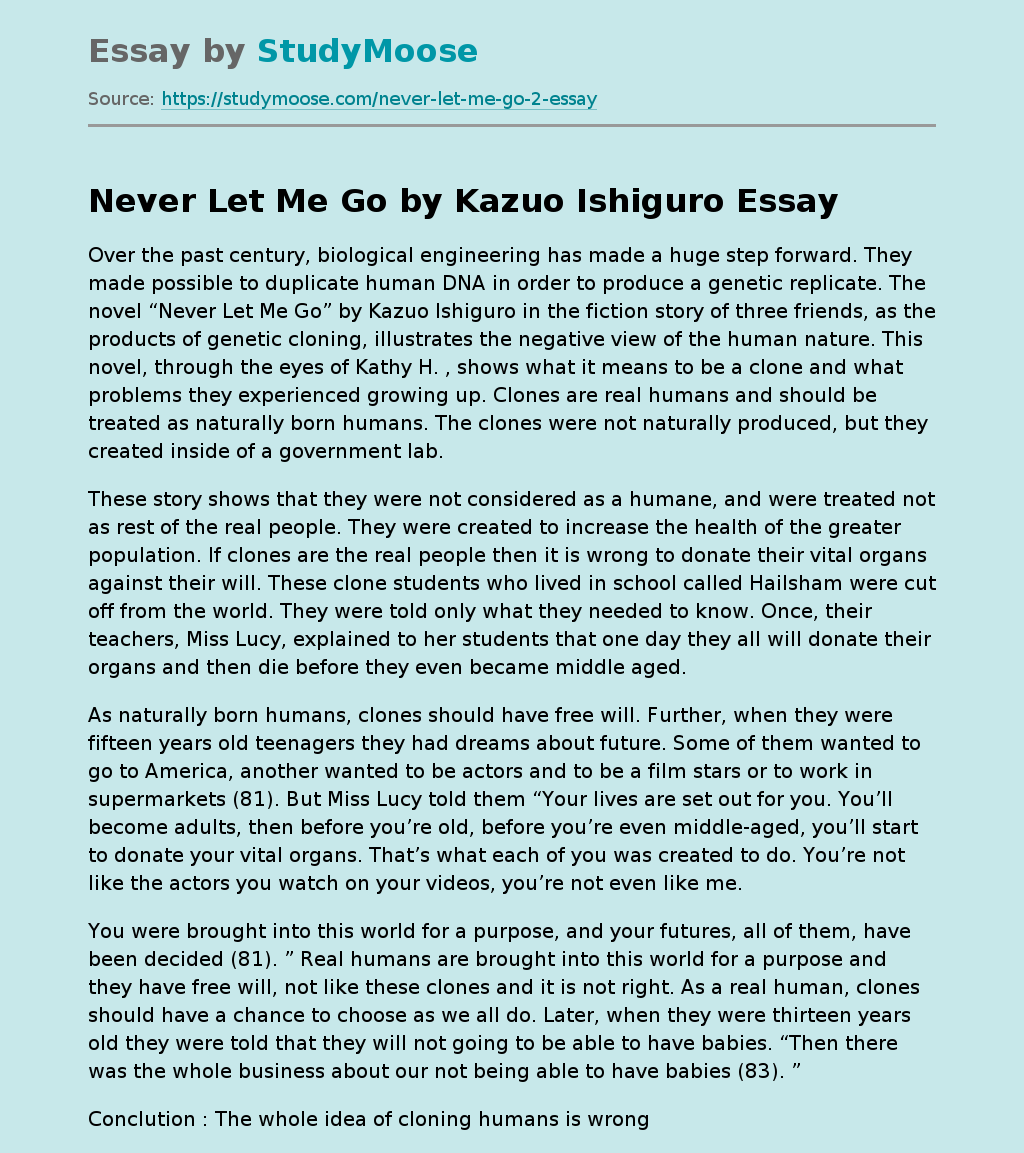