NeoMed Technologies developed a diagnostic device used for cardiac testing, and is headquartered in Ohio. They developed a CAD screen system to detect coronary artery disease. The company was founded in 2000 and is based in Cleveland, Ohio. NeoMed Technologies was faced with a lot of difficult decisions at the beginning when it came to where their product would best fit and be most successful. They had developed a technology that could fit into many markets, but needed to choose a product path and market.

Turn in your highest-quality paper
Get a qualified writer to help you with
“ NeoMed Technologies ”
Get high-quality paper
NEW! AI matching with writer

Their continued challenges occurred due to the changes in the market direction of venture capital opportunities and the funding available, all due to changes in the economy at that time.

Due to the lack of funding, and a continued decline in Venture Capital funding along with a downturn in the economy; I believe had the economic situation been different at the time when they needed venture capital funding, the would’ve faced less challenges. The management team and Board of Directors were selected carefully and all had the experience and the background needed for success in the product market space.

NeoMed Technologies had a strong business plan, and had conducted extensive research in initial planning stages. I believe based on the reading materials in this chapter; they did all the right things in the planning and early development stages.

Although NeoMed Technologies had to contend with big name competitors and major players in the diagnostic and imaging market such as GE Medical and Philips, also located in the Ohio region; their strategy to be headquartered in Ohio was a sound decision.

However, they should’ve investigated further in the opportunity to obtain venture capital funding outside of the Ohio region. Perhaps they could’ve spent more time studying competitive business cases of companies like competitor, HeartCheck, who specializes in the EBCT test. The HeartCheck product, although more costly, had seen success and was widely accepted in the Medical field. Despite the added cost of the HeartCheck EBCT test, they were seeing success in the market.

One strategy change I would’ve considered early on was not applying all resources of their technology into one area. NeoMed Technologies should’ve considered applying their initial product development to the technology of screening for drugs, drug delivery applications or detecting cancer. These areas would’ve possibly allowed for a quick to market product, without the additional approvals, quality standards applied in the medical equipment space, and FDA approvals needed. Bringing a simpler product to market first could’ve brought in revenue to fund the long-term product focus of a CAD screen system. The profits from a drug screening or drug delivery product could’ve assisted in funding their long-term product focus, they missed an opportunity to develop a quick revenue steam.

In addition, NeoMed Technologies could’ve seen success early on in the Homeland Defense space, for detection of nuclear weapons, or dirty bombs. With the shift later in Venture Capital funding opportunities, they could’ve experienced success in this area as well. Bottom-line, they put all their eggs in one basket; they failed to have a backup product to develop a quick revenue stream to further fund their long-term goal. However, without a crystal ball that was a difficult decision. There were clear signs of shifts in investment opportunities, the shift indicted investments being shifted towards Homeland Security, military applications, and protection from various biological and chemical threats.

NeoMed Technologies should shift some of their resources to developing a product to fit into that area, thus allowing them the opportunity to obtain additional venture capital funding, and perhaps developing a profitable product in the Homeland Security space. The revenue stream from this product would allow them later to proceed with their CAD screen system. There was another area of investment that should’ve been further investigated, “Angel Investors”, most of who are Entrepreneurs themselves currently, or at some point in their career. Inviting one of the Angel investors a seat on the board, as well as leveraging the experience they have gained from starting their own company, dealing with the challenges of starting a business, and investigating further Venture capital funding areas.

NeoMed Technologies should’ve reached out farther than just the Ohio-based Venture Capital firms, this would’ve allowed them a broader audience of investors and opportunity. I don’t believe holding off for perfection is necessarily wrong, especially when dealing with, and factoring in the value of human life. The NeoMed Technologies board of directors and upper level management all appeared to encompass strong ethics and while that might be a weakness to others, ethics are important and should never be compromised. Too many companies take the short cut to success and people get hurt. 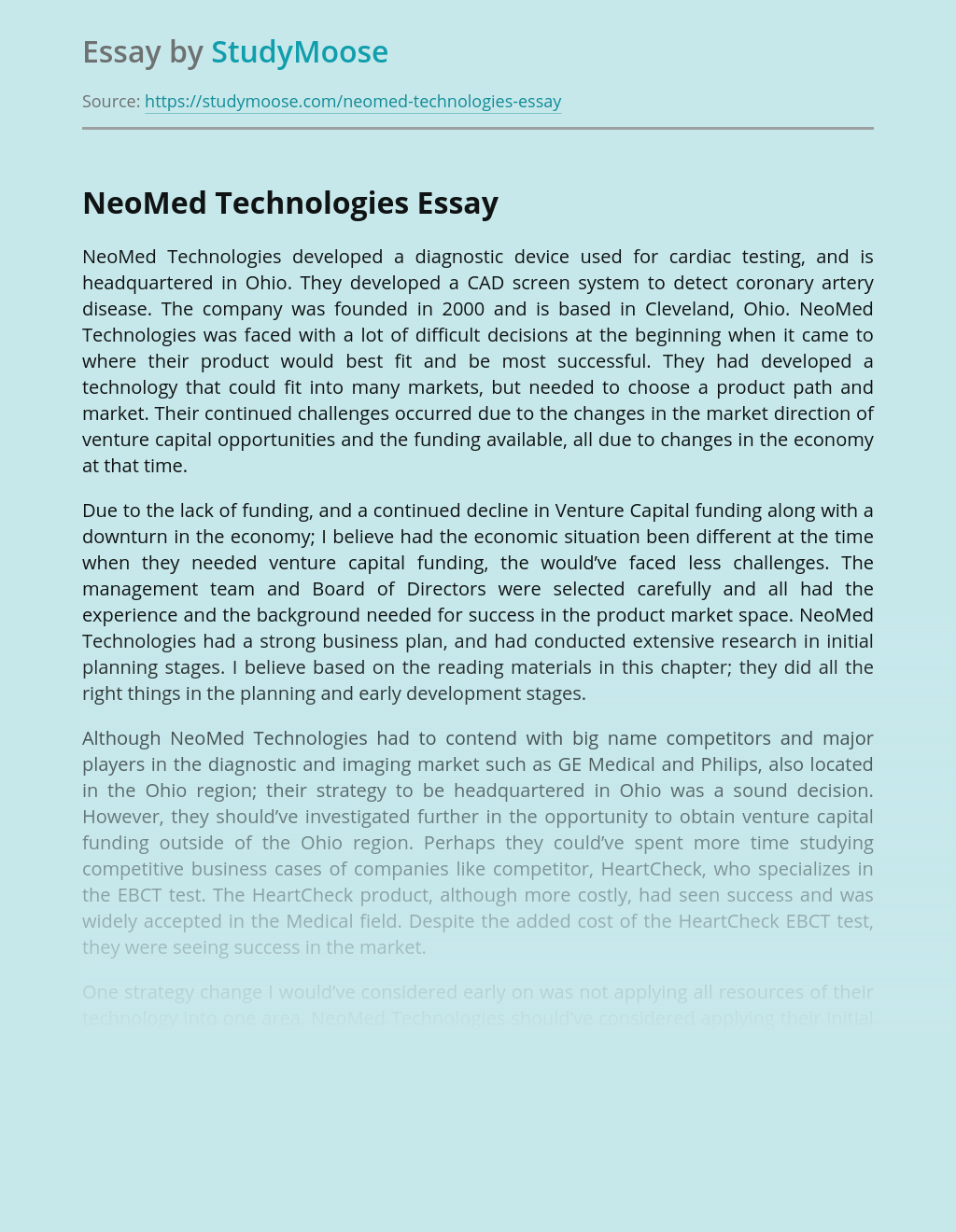 Turn in your highest-quality paper
Get a qualified writer to help you with
“ NeoMed Technologies ”
Get high-quality paper
Helping students since 2015
Stay Safe, Stay Original