“Passing” In Nella Larsen’s Passing, we are privy to Irene Redfield’s commentary on her encounters with Clare Kendry. Irene presents herself as a wealthy, well educated, sophisticated woman and a respected member of the Harlem community. Conversely, she describes Clare as traitor to her people (the Harlem society) and socially undesirable due to the fact that she passes as white and marries a white man. Although Irene expresses great contempt for Clare, she also possesses a deep admiration for her.

This “admiration” could also be translated into sexual desire or lust. Throughout the novel, Irene attempts to rationalize her mysterious feelings toward Clare Kendry, but she can’t. To Irene, “security was the most important and desired thing in life.”

Until Clare arrives on the scene Irene is a “secure” woman. She busies herself with social activities and the raising of her two boys (148). However, something is very wrong. While en route to the printing shop, Irene begins to voice her concerns about “queer ideas” (sex jokes) that the boys had been coming up with .

“If sex isn’t a joke, what is it,” Brian answers (105). He goes on to say “the sooner and more he (their son) learns about sex, the better for him…..it will keep him from lots of disappointments later on” (105)” Brian’s response to her query suggests that to him, sex is a joke. Furthermore, his counter indicates that his sex life with Irene is joke. As we later learn, Brian and Irene have a “sexless marriage” and that Brian “slept in his room next to hers at night”.

This confirms Irene and Brian’s lack of a sexual relationship. For Irene, her marriage is one of convenience, providing her with what she needs and values the most, security (200). It also provides her , as a lesbian, to “pass” in the heterosexual world. “Irene didn’t like changes, particularly changes that affected the smooth routine of her household” . Irene is a very structured, organized woman. She is constantly working to main stability and security in her life. However, she is extremely attracted to Clare, one who does not seem to regard security at all. Clare is risk taker, assertive, bold and ever so dangerous, yet strangely appealing.

When Irene first encounters Clare at the Drayton, she describes her with extremely erotic imagery. Irene’s descriptions of Clare are far more than mere observations. Clare’s “arresting eyes” were “mysterious and concealing” (45-46). Her lips were “sweet and sensitive…a tempting mouth” (45). “Yes, Clare Kendry’s loveliness was absolute, beyond challenge…” (46). Irene desire for Clare is extremely vivid in her depiction of the “lovely creature.” When Irene is about to leave Clare at the Drayton, it seems to her “a dreadful thing to think of never seeing Clare Kendry again” (47). Irene is entranced by Clare, not only by her physical beauty, but also by her mysterious charm.

As Irene becomes aware of her intense desire for Clare, she tries to rationalize her feelings. “Away from the seduction of Clare Kendry’s smile,” Irene becomes quite irritated with herself because she had given in to Clare’s request that they meet again (48). Irene wonders “just what had possessed her to make her promise to find time, in the crowed days that remained of her visit” to spend with Clare (48). Whether she admits it or not, Irene is aware of her erotic feelings for Clare, and she is perturbed at herself for having them, not only because they go against the heterosexual culture, but more importantly because they threaten her security. As Clare becomes more involved with Irene and her family, we learn of Clare’s longing to cross the color line -back into Harlem (black) society.

Her daughter, Margery, is the only thing holding her back. Meanwhile, Brian and Clare’s relationship is developing. Irene realizes that if Clare were free of Mr. John Bellew, she might pursue Brian. What “if he divorced her if Claire were free ?” (187). The thought terrifies Irene, in part because she might lose Brian to Claire, but more importantly she would lose her precious security. Irene could not allow this to happen. She must protect her security at any cost. Then Irene thought “If Clare should die! Then-Oh, it was vile!….But the thought stayed with her. She could not get rid of it” (187).

This confirms Irene’s secret desire to have Clare dead. Although Irene despises the thought, her own security is more important than Clare’s life. It is not clear what happened at the window, but from Irene’s reaction, it is safe to conclude that Clare did not fall on her own. “Irene was not sorry” (210). It would seem that Irene is responsible for Clare’s death. In conclusion, Nella Larsen’s Passing, presents several ideas to consider. She uses the setting of Harlem and the racial concerns, not as ends in themselves, but as catalysts through which she exposes the underlying themes of sexual identity and desire.

Indeed, just as Clare must “pass” as white, Irene must “pass” as a heterosexual woman. If we analyze Larsen’s Passing without first seeking its sexual aspects and rely solely on racial issues to discern its meaning, then an important aspect of the novel remains unexplored. 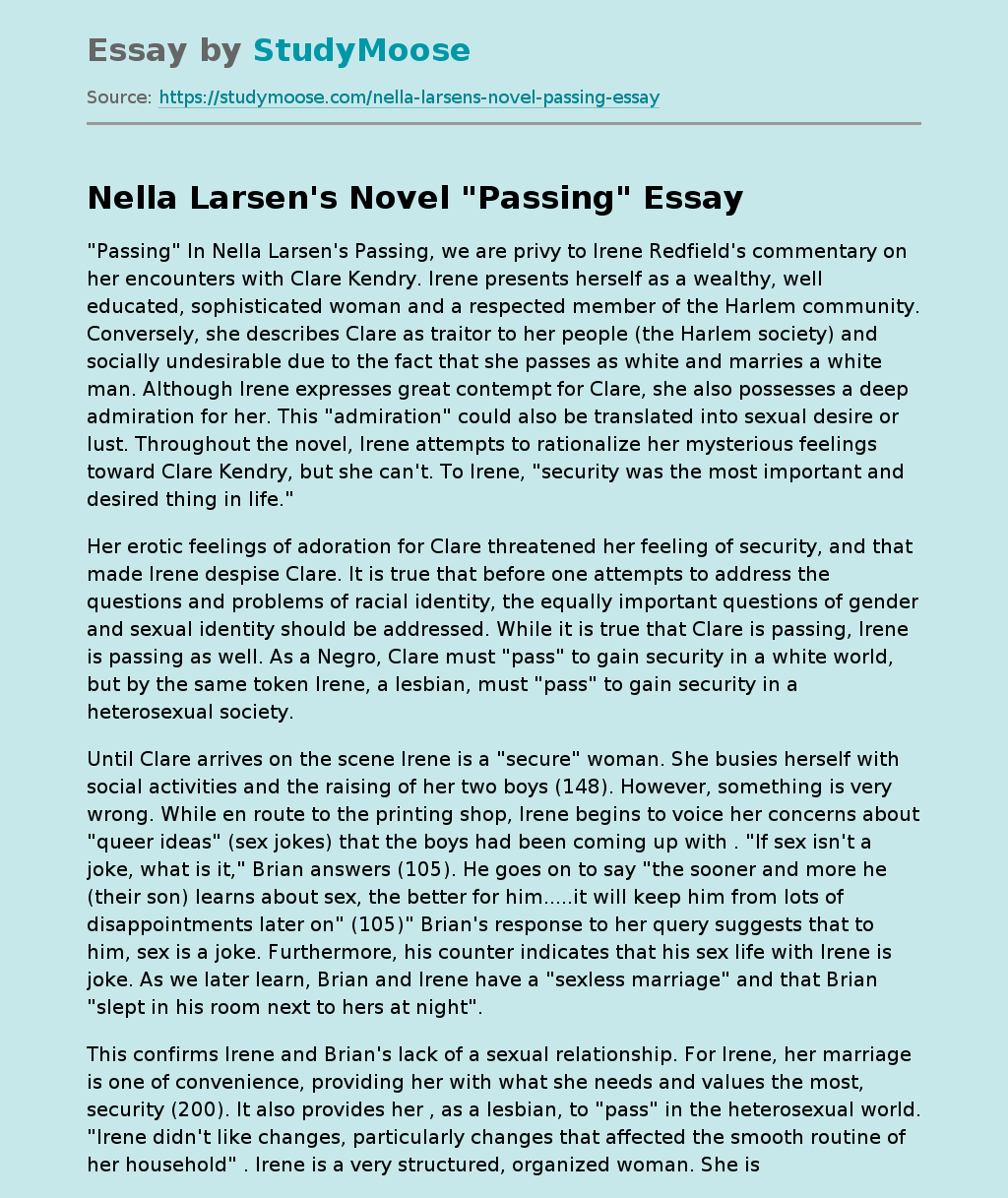