The Truth And Nothing But The Truth? The Legal Liability Of Employers For Employee References

Common law refers to a legal system native and developed in England and in which court decisions set precedence in decreeing case laws subject to usages and customs rather than the codified written laws. In common law, the duty of care refers to a legal obligation in which an individual is demanded to confirm to a standard and degree of reasonable care while undertaking any activity that could inflict foreseeable harm to others (Martin & Jonathon, 2009). This concept was developed by Lord Atkins and it set pace for determination of Tort Laws and especially negligence.

Don't use plagiarized sources. Get your custom essay on
“ The Truth And Nothing But The Truth? The Legal Liability Of Employers For Employee References ”
Get custom paper
NEW! smart matching with writer

For instance, employers are bound by law to observe standards of procedures in referring their former employees to other employers such that the other employer does not suffer (MacLeod, 2011). This paper explores the liability of the employer in making references about his or her employees in common laws, duty of care.

Business corporations today are afraid of providing their former employees’ information to prospective employers for fear of possible lawsuits.

Often, the human resource department strongly fears these suits that they result to strong policies against employment references. However, the question of this action as to being the “best practice” substantially differs between one episode and another (MacIntyre, 2013). Essentially, the liability of employers may arise in any of the following four areas. Firstly, the employer may be liable for defamation at common la. Secondly, the employer may be bound for invading on the privacy of their employees at common law. Thirdly, the Civil Rights Acts, and the retaliation under the Fair Employment Act may deem the employer liable (Adams, 2013).

Finally, the common law may fault the employer liable for negligent referral or in breach of the duty to warn potential and subsequent employers.

The employer’s liability in negligent referrals of their employees arises from the doctrine of vicarious liability. Under this doctrine, a person is assigned liability due to inflicted harm or injury by a negligent person subject to their relationship to the negligent person. Vicarious liability is also known as imputed negligence (Finch & Fafinski, 2011). This doctrine is based on the theory of respondeat superior where “let the master answer” situation answers. For this liability to arise, the employee’s negligence must have occurred within the boundaries of his or her employment.

Legislation to the employer’s liability on employee referrals was sustained in reaction to the defamation privileges claims emanating from employment references. According to Section 895.487(2), it is presumed that an employer’s response to a reference request is made in good faith. Therefore, it is immune to civil liability that may arise from provision of the reference to a prospective employer (Middlemiss, 2011). The good faith presumption, however, may be invalidated or expired if the reference response provided clearly convinces malice and falsehood by the employer. In addition, the presumption expires when the reference response is made in contravention of the blacklisting statute.

Employer reference liability was first decreed in the Gibson v. Overnite Transportation Co. In this case, the plaintiff, Gibson became harassed by union supporters in crossing a picket line aimed at completing his work assignment (Partington, 2011). Consequently, he resigned from Overnite Transportation falsely on grounds that he was going to help in his ailing grandfather’s company. However, the plaintiff was hired by another trucking corporation.

Overnite Transportation responded to reference and the plaintiff was fired. He sued Overnite Transportation for defamation. The grand jury ruled that the previous supervisor acted maliciously and was hence liable for defamation. The jury awarded the plaintiff a compensatory damage of $33,000 for lost wages and punitive damages to the tune of $250,000. The appeal chambers upheld the award.

The Court Of Appeals sent some light on the proof needed to convincingly establish defamation in employment references responses under the auspices of section 895.487(2) (Partington, 2011). According to the court, the plaintiff is burdened with proving that the employer’s response to a reference inquiry was made out of hatred, bad intent, ill will, envy, revenge, spite or other bad motive in regard to the defamed person (Finch & Fafinski, 2011). Therefore, it was not necessary to prove that the employer acted indeed, with actual malice.

Additionally, the employer maybe held liable for negligent referral or duty to warn prospective employers. This doctrine holds that an employer may be held liable or answerable for providing misrepresentation (Middlemiss, 2011). That is untrue reference information or omission of knowledge of the criminal propensities and dangerousness of its former employee. Most recent cases adopted general non legal obligation to warn potential employers about dangerous former employees as was held in the priest abuse scandal (Riches, Allen & Keenan, 2011). However, there are no clear and uniform rules derailing the liability of the employer to third parties with regard to referring former employees who are known to be dangerous to other employers.

In the priest abuse scandal, multiple victims of the priest’s abuse scandal sued the diocese, a former employer of the priest for allegedly “knowing the priests potentiality to abuse children sexually and failing to referring him to the police or preventing further atrocities”. The court commented that doing so aggravated vast obligation overly exceeding the state and other jurisdictions.

In recent years, courts gave decreed in favor of the universities in liability lawsuits. As was held in the Bradshaw vs. Rowling, “students now demand and receive expanded privacy rights in their life at college”. The college administrators no longer have control over the wide berthed arena and hence colleges and universities are not bound to the negligent liability clauses (Finch & Fafinski, 2011). In recent cases, the courts have held no liability subsists for the University for failing to observe the duty to warn. In the 2007Virginia Tech Ruling, the courts held that there was no special relationship subsisting between the university and the students to impose corresponding responsibility (Parry & Parry, 2009). In addition, the court clarified that even if there was a special relationship, the provided evidence failed to give rise to a duty of warning third parties of the criminal acts. However, mental and health specialists attached to a university are obliged to warn potential victims of dangerous and violent students as well as the police of the impeding danger.

Middlemiss, S. (2011). The Truth And Nothing But The Truth? The Legal Liability Of Employers For Employee References. Industrial Law Journal, 33(1), 59-67.

The Truth And Nothing But The Truth? The Legal Liability Of Employers For Employee References. (2015, Oct 01). Retrieved from https://studymoose.com/negligent-referral-essay 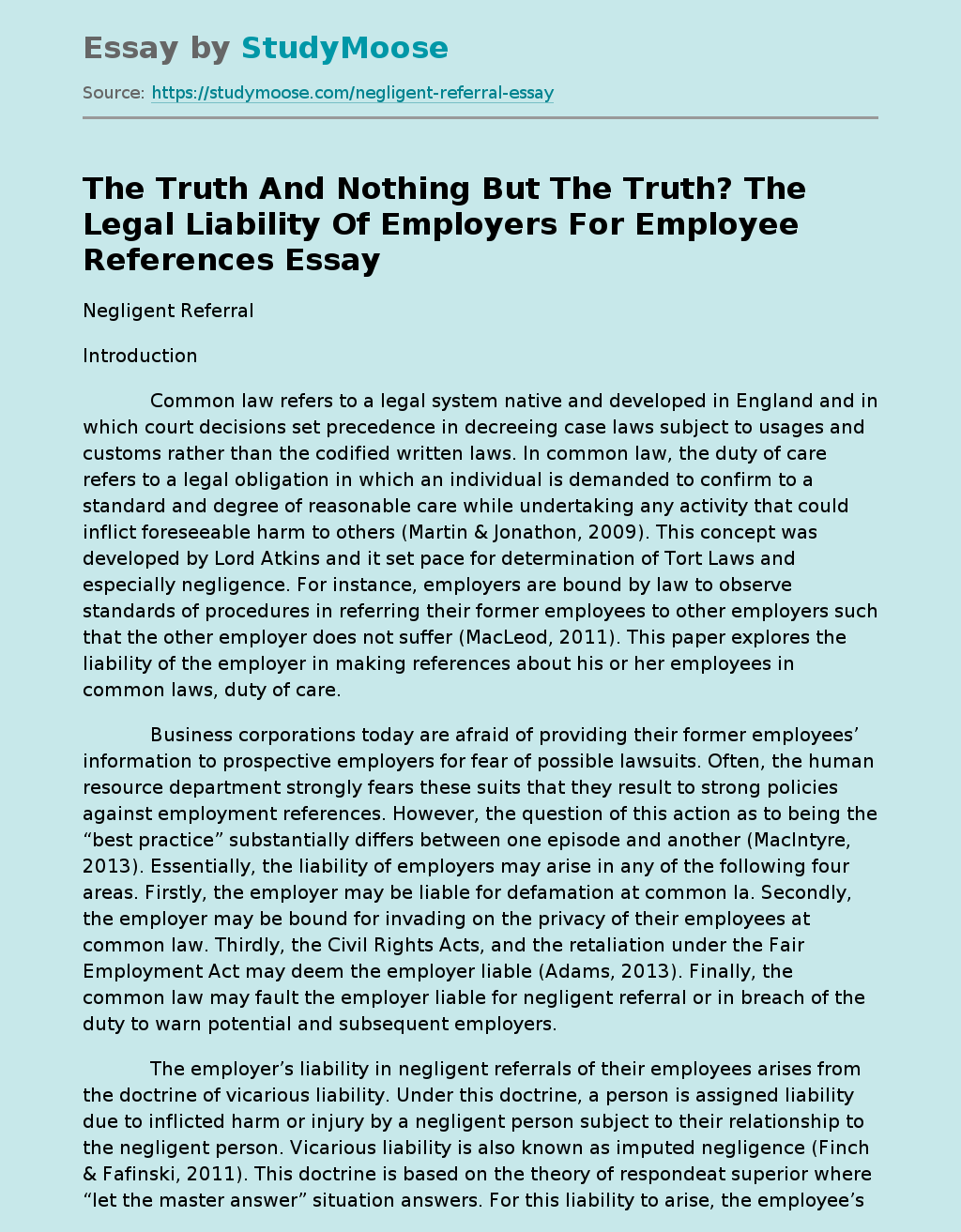