How much time a day do you spend on Social Media? “Every morning, almost every individual’s first instinct is to reach for their phoane and check their notifications and social media. They wake up scrolling through them, liking pictures, commenting” (Phoon, 2017, p.1). People are using social media in every part of their life. Because social media plays a vital role in transforming people’s life style” (Siddiqui, 2016, p.71). It changed the way of people living, such as it transforms people culture, because most of the people started following western culture.

Don't use plagiarized sources. Get your custom essay on
“ Negative impacts of Social Media on Society ”
Get custom paper
NEW! smart matching with writer

Another benefit of social media is that it “brings people to exchange idea, connect with, relate to, seek advice etc.” (Amedie, 2015, p.3). It is the easiest way to connect with another person, so numbers of people share their creative ideas on social media such as on twitter, Facebook. In addition to this, it also helps in education, and business tools (Siddiqui, 2016). Kids can watch videos on you tube if they have any difficulty in their studies.

For example: Facebook allows students to gather outside of class to exchange ideas about assignments” (Amedie, 2015, p.4). In other words, they can also chat with each other on Facebook, whatsapp about their homework’s, so they can easily solve their problems on social sites. So, Social media helps to student to communicate easily and share information quickly (Amedie, 2015). Secondly, Social media helps in business, it is the best excellent marketing tool, and best place for businessman to make new customers. To illustrate this, business man gives the advertisement of their products on social sites through famous celebrities, as people like them and buy their products.

Similarly, Social media helps to enhance market insight and stretch out beyond your rivals with online networking, and helps to better understand their audience likes and dislikes (Siddiqui, 2016). Therefore, Social media helps to increase the marketing of brands and helps to invent new ideas (Siddiqui, 2016). The third benefit of Social media is that it spread awareness among people very quickly. For instance, “The Boston marathon bombing in particular is a good example of social media rapidly sharing information. After the event, the FBI released photo of the two suspects and the photo immediately went viral on Facebook, Twitter, and Reddit” (Amedie, 2015, p.5). As everyone mostly spend of their time on social sites, and when they get any news, they forward it to their friends and families, so information spreads in a very fast way. So that, People get news very faster on social media as compared to any another communication source. (Amedie, 2015). In short, Social media increases interaction of people with each other, gives opportunity to people to express themselves, and also beneficial for business.

On the flip side, most of people say that Social media makes people addicted that decreases the concentration, changes behavior of people, and affect relationship of individuals with their families. In addition, Youths spend most of their time on social sites that divert the concentration of their mind from particular tasks. For example, teenagers who spend a lot of time on Facebook, Instagram are not able to focus on studies very well and always get lower grades in the class (75). It shows that social media affects people mind that they are not able to focus on another tasks as they don’t have self-control and don’t have ability to think independently.

Furthermore, it negatively affects the behavior of people, such as they are doing so many things to get likes on Facebook, and Instagram as they want to become famous. Sometimes, they post sexual content that affects others. In particular, Social media can easily affects the kids, the reason is sometimes people share photos, videos on media that contain violence and negative things which can affect the behavior of kids or teenagers (Siddiqui, 2016, p.74). Social media makes people aggressive by showing photos like people carrying gun, or killing someone (Siddiqui, 2016). Also, people are spending most of their time on internet that affect their relationship with family. Even people are sitting together, but they do not like to talk each other, they are just using their smart phones and sending message to each other. It shows that there is no face- to- face communication among people. To illustrate this: Drago explains her findings by stating that an “overwhelming 92% of respondents believed technology negatively affects face-to-face communication, and only 1% did not. As “73% of students in the dining hall used their phones rather than speaking to one another” (as cited in Phoon, 2017, p.3). As a result, Social media affects interpersonal communication and relationships with others.

Social media also causes some serious health issues such as depression and anxiety that is very harmful for people. To explain this, “People who suffer from Facebook depression are at risk for social isolation and sometimes turn to risky Internet sites and blogs for ‘help’ that may promote substance abuse, unsafe sexual practices, aggressive and self-destructive behaviors” (Amedie, 2015, p.6). It shows that individual has higher risk of depression, anxiety and stress by using social media (7), and also leads some dangerous problems that is not good for society, because when they do illegal things it affect others. Another issue is anxiety by using Social media such as Facebook, twitter. For example-“Survey performed on 7,000 mothers, found that 42% of mothers using the photo- sharing site Pinterest, reported occasionally suffering from Pinterest Stress” ( Amedie, 2015, p.8). It happens because Social media releases stress hormone cortisol which damage to gastrointestinal tract that causes depression and anxiety (8). Thirdly,
false intimacy on Social media leads to depression and anxiety. For instance: One friend of mine poster her photo on Facebook, some friends of her encouraging, congratulating remarks about her getting into shape, but then strangers started to insulted her appearance as well calling her with ethnic slurs. Eventually she was forced to delete her photo, because the comments were becoming two obscene and could not be ignored any longer (Amedie, 2015). It shows that people always giving more negative comments to another people, because they always want to show that they are better than others. When they are doing these negative things, sometimes, it makes other people cry and decreases their confidence level as they started thinking they actually are ugly and fat, because everyone is giving negative comments to them.

Furthermore, Criminal activities such as cyber bullying, and terrorist on Social media is very harmful for others because irresponsible people take advantage of freedom of social media and doing these illegal activities. When anyone wants to harm another person, firstly they check the information on social sites about that person. Similarly, Cyber bullying on internet is a famous criminal activity. Criminals humiliate people by hiding their identity that leads to death and suicide of another person. One of the example is that “The National Children’s home study in Britain found that one in four children reported being bulled on the internet. These issues left teenagers with deep mental scars and have even lead to teen suicide” (Amedie, 2015, p.12).

Therefore, these activities increase risk of suicidal behavior and mental health problems among teenagers (13). Another activity is “Terrorism” on Social media that allows criminal to gathering information of another people, for fund raising etc. For example: “Social media allows terrorist to interact with each other and because it allows them to get new recruits. Terrorists also know exactly who the types of people are accessing social media are, they mostly target young people, especially when recruits are emotionally weak” (Amedie, 2015, p.13). It proves that Social sites help to terrorist to increase their goals and spread negative messages (14). The third activity is Catfishing, when people hide their identity and create fake accounts. To explain this, The MTV’s show catfish describes people who create fake social networking profiles, and Catfishing is the befriending process of strangers online while using a fake or stolen identity, it is a deceptive act and it has ruined marriage, relationships, and the emotional wellbeing of many people (Amedie, 24). Since, it harms people psychological and emotionally, sometimes people commit suicide (Amedie, 2015). It can be said that social media is really fake and these criminal activities can occur to anyone who is using social media and causes some serious problems. 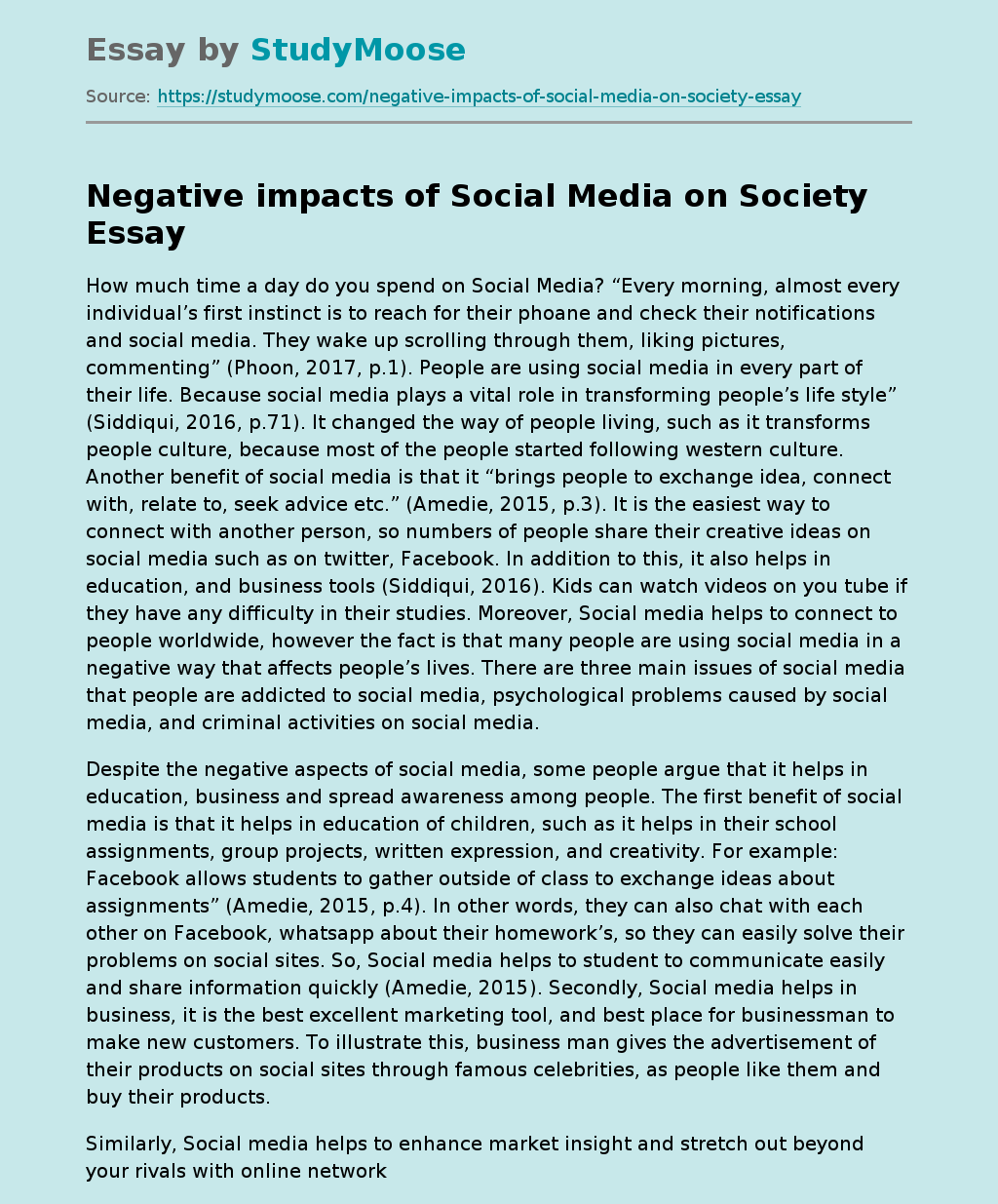