Social networking in our lives

As technology advances it becomes a big part of our lives and has changed the way the world communicates. Being a teen in this generation we have basically grown up with cell phones and social media. Some say that these two things have greatly impacted us in a negative way. According to Alive. com a study showed that 73% of teenagers use some type of social networking and along with the usage of social media, teens today are at risk of anything from cyber bullying to affecting the development of teenagers.

Social media has become very popular and is causing a lot of problems in today’s teens. “Many teens learn the hard way once they hit “send,” there is no such thing as an “erase” button. ” Pat Etheridge A former CNN correspondent specializing in children’s health and family issues said this. In this case we can look at a cause in effect in lack of communication when communicating over the Internet or text messaging we miss out on other important ways of communication such as body language being an important part.

Simple messages can be miscommunicated into something else, and can lead to hurt feelings or even the loss of friend ship without even seeing someone’s body language or hearing the tone of their voice. In the “real world” when face to face with a co-worker or your boss body, language it is very important It defines a part of who you are and your identity.

Now social networking is not just Facebook, Twitter, MySpace it also encompasses online dating sites as well. Teens use Social dating sites and that will blur the boundaries by mixing the elements of the two together.

There are a lot of heartwarming story’s on those dating sites but let’s just get real for a moment, how many other people tried to contact that person, how many dates or people did that person see before they found the “right one” . This eliminates the interaction that people have to experience between one another such as the “icebreakers” there are been many cases of bad things happening take for example the most recent Christian mingle. There have been many reports of date rape victims; it’s easy to lie about the way you look or who you are over the Internet.

Dating sites are also linking up with popular sites like Facebook and twitter, allowing you to connect through them, and intern shares more information about yourself that you might not want other people to know about. Many have argued that social media has more positive effects on teens than negative. Some of these people say that social media actually helps engage teens in more activities like volunteer work and can help a enhance teen’s communication, but it’s just the opposite.

Social media does have some benefits but we need to think about how it affects the developing mind of teenagers. Since teens are known to give into peer pressure easier, they can easily find themselves participating in risky behaviors and in tougher situations than normal. A lot of social media users also use sites like Facebook to rekindle old relationships and create new ones by messaging. This is a good thing that people are more outgoing but if this is the only way people talk it could create a lack of communication skills instead of enhancing them.

Communication skills are necessary for almost everything and are especially needed for things like job interviews and just meeting new people. Overall Social media has its ups and downs but in the long run the effects are for the most part negative. It’s obvious that we can’t and won’t stop using social networking sites but we can prevent things like cyber bullying and internet sex crimes by blocking or protecting your social page but as for the social skills, depression, and overall development can be helped by limiting your time/our time on things like Facebook, MySpace, and Twitter.

Social networking in our lives. (2016, Sep 11). Retrieved from http://studymoose.com/negative-effects-of-social-media-3-essay 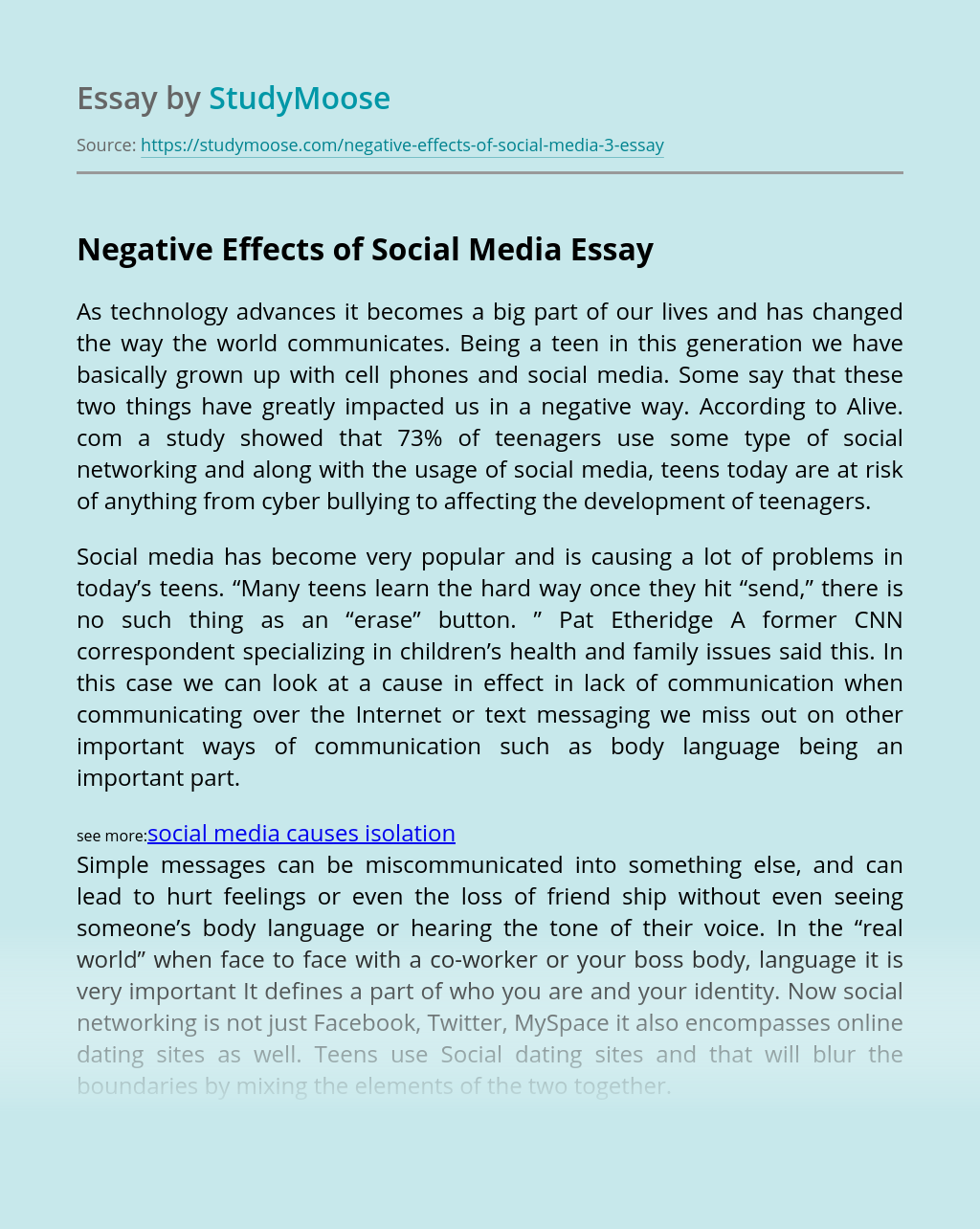 Don’t waste time
Get a verified writer to help you with Social networking in our lives
Hire verified writer
$35.80 for a 2-page paper
Stay Safe, Stay Original