Among these effects, negative commercial influences have become more and more clearly.

Don't use plagiarized sources.
Get Your Custom Essay on ﻿Negative Commercial Influences on Scientific Research Just from $13,9/Page

On the one hand, because of the profits, some researchers begin to focus more on the researching speed rather than the quality. In order to succeed quickly, some researchers hope to get a good experiment results as soon as possible. In this case, they may fail easily or receive worse consequences. On the other hand, it has led to some wrong purposes to sell out science to commerce. A new report from the organization Scientists for Global Responsibility looks at the bad impact on five commercial areas which includes pharmaceuticals, tobacco, oil and gas, defence and biotech.

From the perspective of the defence, in the theory, it’s normal and reasonable for a country to develop the scientific researches on the countries’ defense. But in fact, with the overwhelming attentions on new military technology and the huge financial support, the research has changed the original pure goals into developing military hardware, even resulting in the competitions among different countries. When it comes to biotech, before the emergence of biotech, business and science operated in largely separate spheres.[2] Whereas, there is also a marriage between the commercial support and scientific researches at present. And sometimes, this kind of “marriage” may cause big faults that can do harm to human being’s health because of some misleading messages in the biotech area.

Admittedly, the cooperation between the commerce and the scientific research has bring some positive effects. First of all, with more financial investments, researchers can have enough money to purchase some advanced equipments so that they can do the experiments they’re willing to trying. Second, the cooperation can help scientists put their researching results in the labs into the real world. If the invents display on the table in the labs or museum, they’re just the dead thing. But if the invents can be used in the daily life or put into the customers’ market, they may bring something new to make the lives more convenient. However, because of the commercial influences, science has lost the freedom and the time to carry out research as thoroughly and as painstakingly as it should.[3]

Generally speaking, commerce has brought both the positive and negative effects on the scientific researches. Even though the cooperation activate research or facilitate people’s life, the negative influences have caused more and more parent shortcomings. So reform is needed to improve the cooperation. 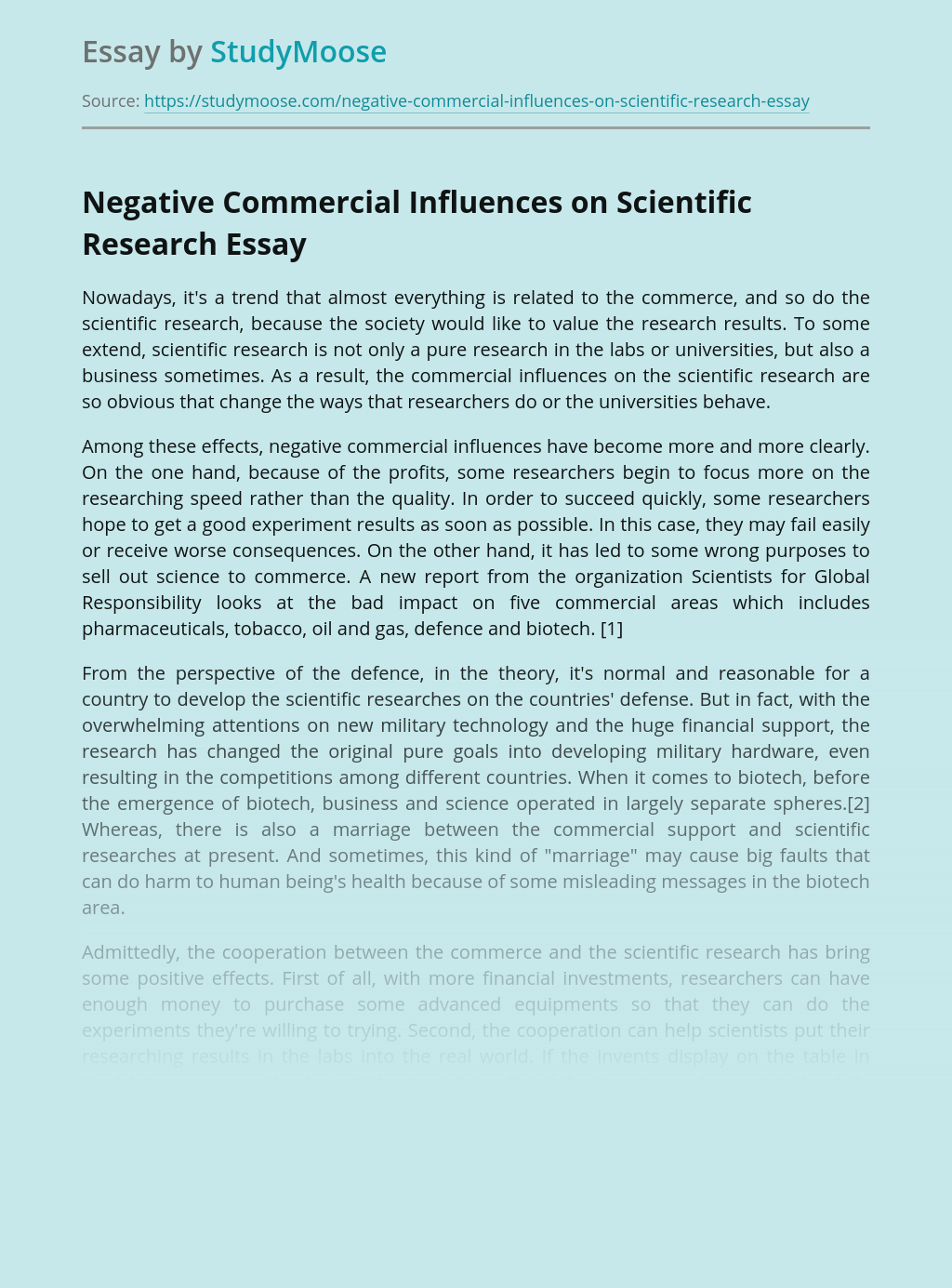 One of the more prominent environmental documentaries of the last decade, “Before the Flood” introduces many realities facing the conversation of climate change and ecological preservation. Leonardo DiCaprio uses his platform to analyze the true nature of climate change, not only as a future issue that needs to be addressed but as a present reality...

Nowadays, the social networking known also as social media has become a widespread subject among people, especially among teenagers. At its beginning, social media consisted of diverse dating websites. Now, most people consider that having a social media account means that you have a Facebook account. Facebook involves interactivity and the aim of it was,...

Factors to be considered while choosing right brand ambassador In collaboration with Claudia de Pretto, e-Luxury Specialist at IC-Agency Global companies have long understood the power and impact of associating popular personalities with their brand name and products. Most will agree that a successful brand ambassador can make or break a new product launch, or...

My personal ethics are shaped by my training and responsibility as a sailor serving in the US Navy coupled with my duties and responsibilities as a Christian. At different times my ethical approach changes but can be mostly characterized as a bridge between a utilitarian, loyalist, Judeo-Christian, and intuitive ethical styles. The utilitarian and loyalist...

Adhd Medications Versus Side Effects

According to “ADHD is a problem” (2010), “ADHD is the most commonly diagnosed behavioral disorder of childhood. It affects about 3% – 5% of school aged children. ” In 2010 the World Health Organization (WHO) conducted a study that estimated that 3% to 4% of adults have ADHD. Of these it is estimated that between...