Ned Kelly
Kelly was twelve when his father died, and he was subsequently required to leave school to take on the new position as head of the family. Shortly after this, the Kellys moved to Glenrowan. As a teenager, Ned became involved in petty crimes, regularly targeting the wealthy landowners.

The story goes that Ned Kelly was influenced to become a bushranger. His family was not particularly liked by the law, and so when he was persecuted by a few of the policemen, he reacted and decided to become an outlaw.

Don't use plagiarized sources.
Get Your Custom Essay on Ned Kelly Just from $13,9/Page

He figured that if he was going to be charged for something, he would give them a real reason.

Kelly became a protege to another bushranger, Harry Power who was a notorious bushranger of Victoria, originally transported to Van Diemen’s Land in 1841 for stealing shoes. Upon his release, he continued his life of crime, which landed him in Pentridge Gaol. He became a bushranger when he escaped from Pentridge in 1869.

At first he worked solo, but decided after while that he would like an accomplice. A friend of his named Jack Lloyd had a nephew, Ned Kelly, just 15 years old and already embittered by frequent run-ins with the police. Lloyd recommended the young Ned Kelly to Harry Power. Power became a mentor to Ned Kelly, taking him on as an apprentice in 1870, and teaching him the finer points of bush ranging.

A lot of people think of Ned Kelly as a cold blooded killer and a criminal. Ned was in trouble from a young age, he robbed banks and the ones he killed, and he stole horses and ran away from the police. His family were thought to be wild and reckless and where ever Ned went he took hostages. He got his friends into his mess, got Joe Byrne to kill one of his best friends, Aaron and he had a deadly accurate shot with a revolver or rifle. He was someone to be afraid of. But then again… Through it all, Ned emerges as a incredibly courageous individual , as he did from the mist at Glenrowan, dressed in his famous suit of armour, for his extraordinary last stand.

A special 60 minutes episode showed that 91% of those who voted believed that Ned wasn’t given a fair trial. Others think he has a victim of a vicious system. In his very brief life he became an Australian legend. Ned only killed in self defence, when he was 9 he risked his life to save a boy from drowning, he had to become the father of the family at a young age. He was punished for things he didn’t do and was victimized by the police. He gave to the poor and he would do anything for the ones he loved. His last wish was for the police to let his Mum go, since she was in jail for something she didn’t do. Ned was self-educated and very loyal to his friends, family and supporters and had a good sense of humour. His mocking courage never deserted him and to be as game as Ned Kelly is to have the ultimate bravery. He was and still is a hero.

I think he was hero but it’s up to you to choose what you think. Make sure you read all the facts before you judge him. Just like the saying don’t judge a book by its cover!

It is not true that Ned Kelly only killed in self-defence. He was a cold-blooded killer who willingly murdered policemen and others who betrayed him (this is hardly self-defence). He most certainly planned to murder most of the policemen travelling to Glenrowan by train, by causing the train’s derailment.

You may also be interested in the following: ned kelly essay 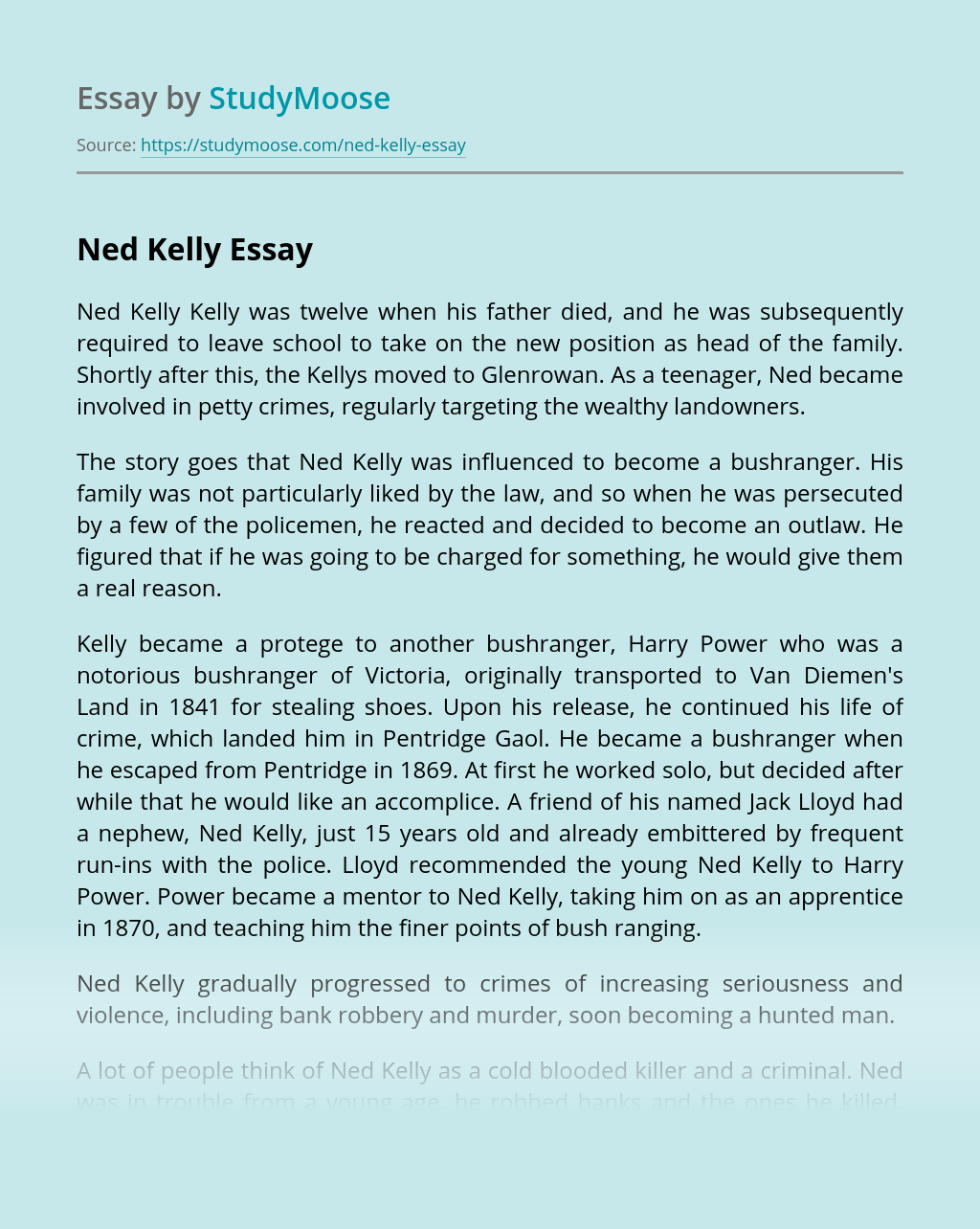 ‘Salome’ and ‘Hitcher’ both use a first person persona and with that, give us insight into their feelings and the theme of violence throughout both poems. In ‘Salome’, Duffy’s character uses a nonchalant tone with no remorse when depicting her actions, which is also present in ‘Hitcher’ too. Salome had ‘done it before’ and will... VIEW ESSAY

View sample
A University Education Is Not Essential for Success’

“We must always think about things, and we must think about things as they are, and not as they are said to be” (George Bernard Shaw). These words define how people tend to only view things from the outside, without looking deeper. They do not look past the stereotypes to see things for what they... VIEW ESSAY

1.What sort of person does Huck Reveal his father to be? What is Huck’s relationship with his father? Huck clearly portrays Pap as an irresponsable dad, and making the readers think he comes back only after his treasure. The worst quality his dad has is his addiction to alcohol. His problem is what really affects... VIEW ESSAY