Necessity of Stratification and Social Classes

A functionalist view of stratification views stratification as necessary for a society to function efficiently which enables it to reach its full potential economically and socially. Functionalists view society as a set of interconnected parts which work together to form a whole. (Haralambos et al 1996) Institutions are part of the social system they are a prime contributor to the maintenance of a society. The functionalist view has been criticised, this essay seeks to explore some of these criticisms and give sufficient evidence to support their views on social stratification.

Don't use plagiarized sources. Get your custom essay on
“ Necessity of Stratification and Social Classes ”
Get custom paper
NEW! smart matching with writer

A major functionalist theorist, Talcott parsons (1954), saw social stratification as inevitable as it derives from shared values, which are a necessary part of all social systems, and it is functional for society as it serves to integrate various groups in society. In order for a society to operate well there must be those who are at the top of the societal hierarchy, leaders, who are necessary in order to run anything efficiently, and if there are leaders, there will inevitably be those below them.

The way in which a society is stratified differs from one to the next, but in most Western countries this is similar. The reason being, Western countries emphasise economic supremacy. Institutions shape, through socialisation, what people value and regard as the ‘norm,’ and in the West it’s that which contributes most to the efficient functioning of a society such as the role doctors, lawyers and politicians carry out.

Those who perform successfully in terms of society’s values will be ranked highly and are likely to be rewarded highly.

“If the rights and prerequisites of different positions in a society must be unequal, then the society must be stratified, because that is precisely what stratification means.” (Davis and Moore 1998) In Parson’s words (1954 cited in Haralmbos 1996) “stratification in its valuational aspect then, is the ranking of units in a social system in accordance with the standards of the common value system.” Stratification is also justified by functionalists, as being the prime force of placing and motivating individuals in the social structure.

Social inequality, as seen by functionalists, is inevitable, it’s an ‘unconsciously evolved patten of life, by which societies ensure that the most important positions are filled by the most appropriate people, the most highly qualified. (Davis and Moore 1998) Of course this ‘blase’ view of inequality is highly criticised. Melvin Tumin (Davis and Moore 1998) opposes the functionalist view of stratification by pointing out that the term ‘functionally important’ refers to the survival value of a social structure. This concept involves the issue of minimum versus maximum survival, that all structures must be judged as positive contributors to the functioning of any society, and to what scale are such structures valued as greater or less important to functionality. For a society to be run efficiently, there will inevitably be some positions in a society that are regarded as higher or lower in status than others are. Tumin points out that inequality is ‘antique’ and worldwide.

But if we go all the way back to traditional times; in a tribe such as the Ndebele of Africa, we see that women were pampered and treated very well by men, simply because their jobs of gathering food goods, berries and fruit, aswell as raising the children and maintaining the home were regarded as the most fundamentally important in that society. If we look to more modern times, people in high positions such as lawyers and doctors are regarded as important people and rewarded in pay, status and ‘perks.’ They perform fundamental functional roles by maintaining good health in their society; lawyers uphold and enforce the law, prosecuting criminals. These are both obvious examples of important ‘survival’ roles. Political leaders or country leaders are representatives of the people in their society, nominated to power by the people of society to apply strategies to improve the functioning of society.

Tumin (Haralambos 1996) criticises the functionalist view of stratification by pointing out that the opportunity to discover talent in a generation varies with the different resources of the parent generation. In other words, the social class one is born into affects their life chances. This can definitely be questioned in a Western society such as Australia. Wealth may be differentially distributed in a stratified society, but that is not an excuse for inequality. Despite being born into a low class family, one can still attain education due to the welfare systems set up by governments to create equal opportunity. Government schools provide education at a minute price to that of private schools, and even then, this fee is voluntary. The system of HECS (Higher Education Contribution Scheme) enables people to undertake tertiary education and achieve qualifications such as degrees and diploma’s, only having to repay the finance needed, once having got this and begun a career.

Here enters the question, is it the motivation needed to undertake these lengthy procedures that’s missing, or is it due to financial inequality? Skilled jobs maintain job satisfaction for the worker, but not always. With job acceptance not only do you accept social interest and personal satisfaction, but this may come at a cost, maybe less wages, but everyone enters their job with the realisation of the rewards involved whether personal or financial. Some people must accept neither and work to live, but this could be the result of their lack of willingness to stay motivated with education. Many youth drop out of school early due to laziness; they then must accept the consequences of a lower skilled, lower paid job.

Upward mobility isn’t always possible, but in societies which permit exogamy it is, and in societies such as most of those in the West where welfare systems are set u by the Government to create equal opportunity, people have access to the means of a higher education, a higher job, better pay and everything that comes with it. Koffi Annan, the head of the United Nations, he didn’t just gain that job and status from his older relations, he had to work for it. Originating from Ghana, one of Kofi’s dreams was to “make some money in the business world.” This is nothing compared to what he has become, one of the best representatives the United Nations has ever seen!

Stratification is no means to justify the status quo. It is evidently the appropriate name for the way in which a society is naturally formed into a hierarchy of positions in order of their importance to an efficiently functioning society. This is of course if no advantage is taken of such high positions, which unfortunately sometimes occurs. In America and in Zimbabwe such advantage has been taken by the Presidents, Bush and Mugabe oppressing citizens to gain personal wealth, sadly this is greed driven and often this is the case. But this is not the result of stratification of society; it is merely a crude exploitation of their positions and their fellow citizens.

Functionalists’ view of stratification is a credible view of the inequality and inevitable hierarchy that occurs in society today, especially Western society, where there is such competition for high status positions, but those who deserve them gain them.

Necessity of Stratification and Social Classes. (2016, Jun 24). Retrieved from https://studymoose.com/necessity-of-stratification-and-social-classes-essay 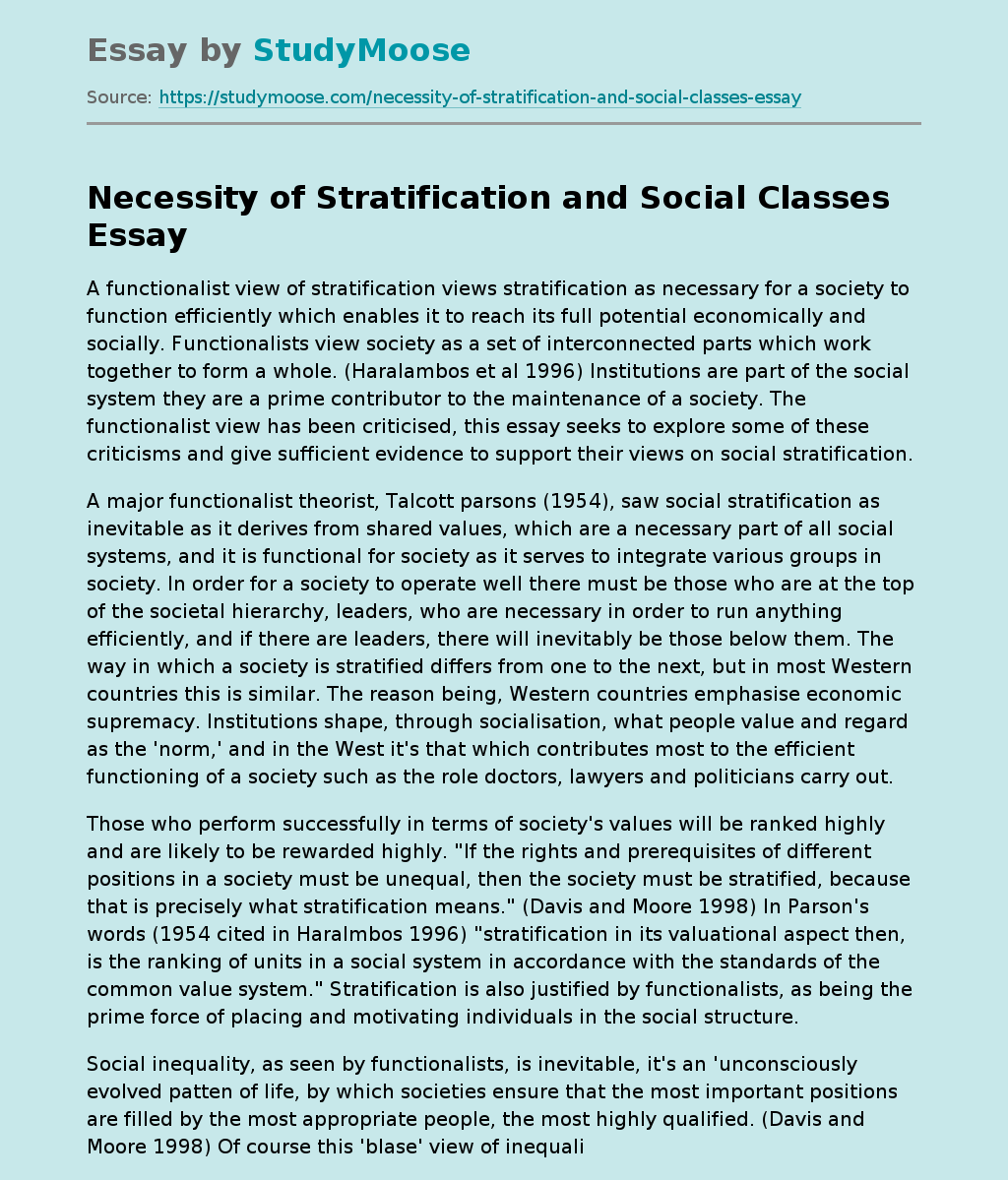