One of the largest internal security threats that the government of India faces today is Naxalism. 1Recent reports show that naxalist movements have spread to as many as 22 states across India, including states such as Gujarat, Punjab, Delhi and Uttarakhand that were earlier known not to have any links to naxalism and as many as 39 Left-wing extremist groups are currently operating in the country with a combined membership of more than a lakh. The naxalite-armed movement is based on the Maoist ideology, which is mobilizing large parts of rural populations to revolt against established institutions by engaging in guerilla warfare.

Don't use plagiarized sources.
Get Your Custom Essay on Naxalism Just from $13,9/Page

The Naxalite’s use of arm and ammunition against the state and central security forces has challenged the very principles of the state, which are sovereignty and the sole control on use of power. In light of this the research paper aims to explain that how Naxalism has proved to be a challenge to the state of India and how the Indian government is trying to overcome this challenge.

According to Prime Minister Manmohan Singh, Naxalism remains the biggest internal security challenge and it is imperative to control left-wing extremism for the country’s growth. These lines by the Prime Minister itself explains that how Naxalism is a serious challenge to India. The terms Naxalites or Maoists are used to refer to militant far-left radical Communist groups operating in India. They are inspired by the doctrines of Mao Zedong who believed that Naxalites should work to overthrow the government and upper classes by violence. The start of Naxalism can be traced back from a period when the Mughals used to rule the country but originally it (3) started from Naxalbari area in West Bengal in 1967 and since then has spread to the rural areas in central and eastern India, ostensibly to champion the cause of small farmers and tribals through violence but was wiped out in 1970. It soon became out of fashion in its homeland West Bengal. But the underground operations of the outfit continued.

The Naxal Management Division of the Indian Ministry of Home Affairs (MHA) describes the (4) objectives of Naxalites as destroying “the State legitimacy, and to create a mass base, with certain degree of acceptability, with the ultimate object of attaining political power by violent means.” The MHA has also stated that Naxalites attach themselves to various organizations and societies on issues such as displacement, land reforms and acquisition where they can increase their mass support. (5) They have been named as a terrorist organization according to the Unlawful Activities (Prevention) Act of India, 1967.

Naxalites since long have been challenging the central and the state government on various fronts. The naxalites have been attacking police establishments and infrastructures such as public transportation, national buildings, which has caused insecurity and instability in the entire area. (6) From the period 2006-2012, there were nearly 12,000 incidents with Naxalites in which 4,000 civilians killed. The Naxalites have been spotted active in approximately 40 percent of India’s geographical area. (7) They control large portions of remote and densely forested areas and are concentrated in an area called “Red Corridor”. This area is also the tribal belt where the tension between economic development and aboriginal land rights is most apparent. The Naxalists have shown activity in recent times in regions such as Darbha Valley, Chattisgarh that has led to several deaths of civilians and security-personnel. Naxalism affects the nation at various stages. It affects several macroeconomic factors such as reduction in per capita GDP growth, higher inflation rates, lower tax revenues, higher expenditure on defense at the cost of expenditure on education and health and lower exports, reduced bilateral trade flows and reduced foreign direct investment inflows. The Indian Government has adopted various policies and various steps in an attempt to tackle the problem of naxalism. The India Home Minister P Chidambaram has declared that the security forces need to be more assertive against the Maoists. However, this is only one part of the solution.

An examination of the reasons behind the Naxalite movement indicate that military force on its own will not be enough to counter India’s biggest security. So various other approaches like 8A Task Force on inter-State coordination headed by Special Secretary, Internal Security, an Inter Ministerial Group in the Ministry of Home Affairs to review the implementation of development programmes in Naxalite affected areas, a high-level Task Force under Cabinet Secretary have been formed for promoting coordinated efforts across a range of development and security measures. These institutional mechanisms, and the interactions that have taken place, have eventually helped to generate a degree of consensus among the States about the need to pursue a coordinated strategy. In an attempt to deal with this decades old problem, it has been felt appropriate, after various high-level deliberations and interactions with the State Governments concerned, that an integrated approach aimed at the relatively more affected areas would give surer results. 9With this in view, a detailed analysis of the spread and trends in respect of naxalite violence has been made and 34 affected districts in 8 States have been taken up for special attention on planning, implementation and monitoring of development schemes. Within these 34 districts, 8 most affected districts in 4 States, Bihar, Chhattisgarh, Jharkhand and Orissa, have been taken up for implementation of integrated security and development action plans, an approach that can be replicated in other affected districts also. Focused attention is also being provided in meeting the security deficits in these districts, in terms of employment of infrastructure, police deployment, weaponry, equipment, etc. The concerned ministries are also taking necessary steps.

The Telangana movement of the 1940’s was what started the Naxali movement and more importantly the revolt in 1967 in Naxalbari have created a political movement in India that is deep-rooted firmly and cannot be swept away easily. The state has been dealing with the problem of naxalism for the past 40 years and if it doesn’t change the way it handles naxalism then the problem of naxalism will carry on for coming few decades. The record of the past four decades shows clearly that an approach that is almost exclusively based on force and suppression is not able to destroy the movement. Even a situation like in 1971 where the state was able to curb the challengers with a hard hand and almost destroyed the movement, cannot be repeated today as it is entrenched too deeply within India’s socio-political sphere of the affected areas. The state is at war with itself but this war cannot be won by the use of military. It will carry on to be a part of Indian politics and society, as long the state does not acknowledge the fact that why these movements are not coming to an end. The government seriously needs to find a permanent solution. The proposal of developing the remote areas will further worsen the situation, as it is not what the Naxalis demand.

Therefore the state must start to fight the conflict legally, minimize collateral damage, strengthen the leadership of the security forces and abstain from any human rights violation. The security forces should start protecting the population living within the area of conflict instead of merely confronting the Maoists on large scale. The Naxalite movement must be challenged politically by presenting better alternatives to the Maoist approach and should offer new perspectives. In this regard the state should start addressing the basic needs of the poor and fulfilling its main responsibilities to deliver human development to these disadvantaged areas. But also the possibility of the Naxalites achieving their aims must be questioned. Indeed they were able to spread all over the country and constitute a big challenge but the persisting military tie makes it illusionary for the Maoists to seize state power within the foreseeable future. ?Their advantage is that they put issues on the public agenda, which were being ignored, and that they gave people a voice that was neglected. Today they are a part of the public discourse.

I am in favor of the approach used by the naxalis as they are the minorities and it would have been unlikely for the movement to achieve similar results if it would have followed a non-violent approach, as they would have lacked publicity. Many people within the Indian society have sympathy for the root cause that the Maoists are fighting for, however the fewest agree on the violent way of struggle. The execution of brutal violence and attacks on civilians, such as the recent one where the Naxalis 10triggered a landmine blast in a forest area on the Maharashtra-Chhattisgarh border in the wee hours on Thursday, which eventually led to the killing of at least three police commandoes. Without a second thought Naxalism is a serious threat to the Indian state. The Naxalite movement is an indication of the failure of the Indian state to provide human development for its citizens. Naxalism does not only threaten the flow of foreign direct investments but could destabilize the whole political order as many citizens lose their faith in the state and therefore its legitimacy is challenged. India, which is on its way to become one of the superpower on the international level, needs to tackle its internal problems urgently. 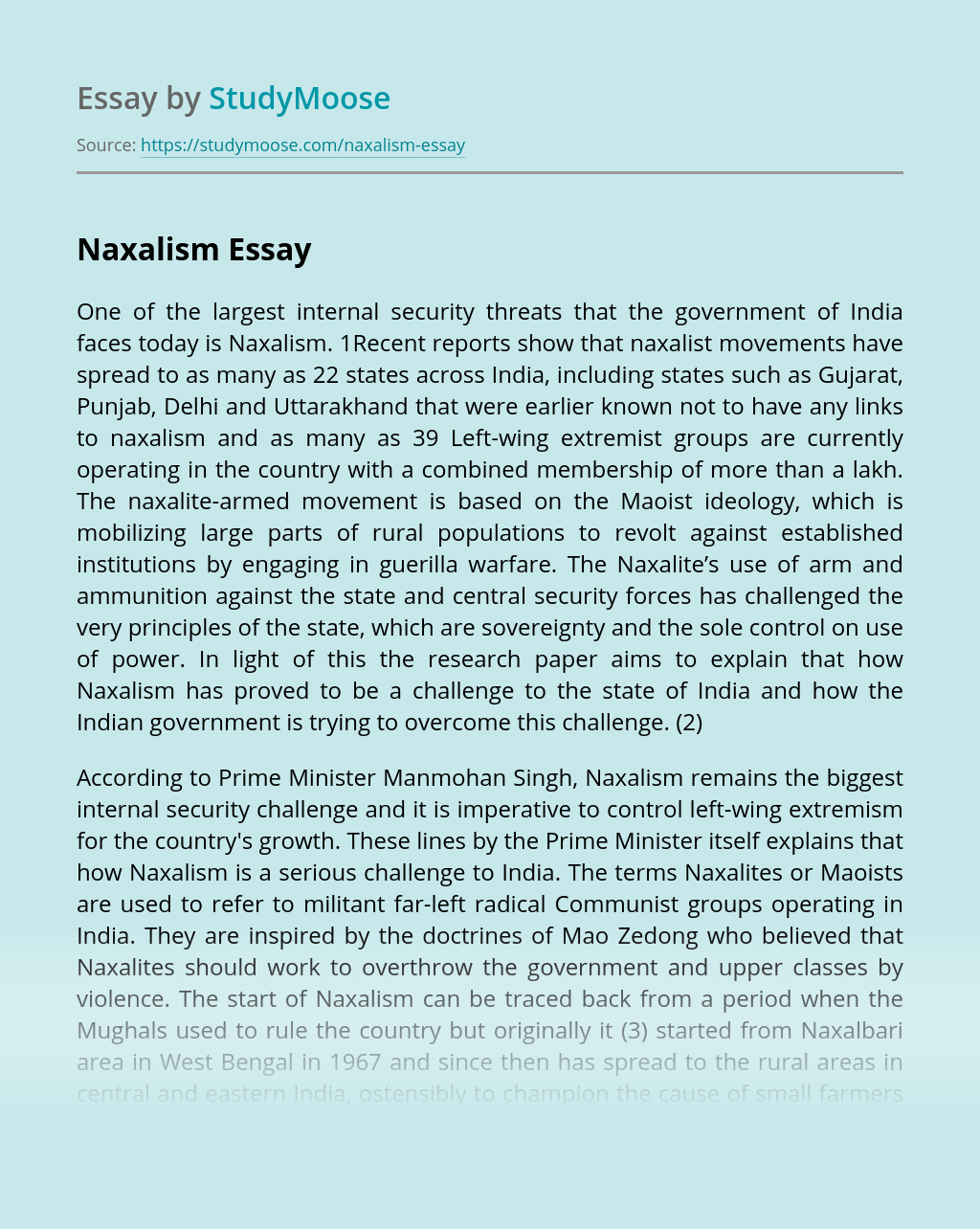 Oedipus complex in "Sons and lovers" by D.H. Lawrence

View sample
Analysis of "The piano" by D.H. Lawrence

The speaker in “Piano” by D. H. Lawrence is proud to be a full grown man, yet he loves remembering his happy childhood; his nostalgic attitude causes him to feel guilty as if he had betrayed his present state of being. Through effective imagery, Lawrence is able (to describe an image) to help the reader...

Hinilawod recounts the story of the exploits of three Sulodnon demigod brothers, Labaw Donggon, Humadapnon and Dumalapdap of ancient Panay. It would take about three days to perform the epic in its original form. Thus, making it as one of the longest epics in the world. Kaptan, the king of the Gods, decreed that the...

King Louis’ reign and goals can be summarized with his desire for “one king, one law, one faith.” As an absolutist leader, he centered the country around himself, and was successful in his goal. By glorifying his position as king, he achieved “one king”, by limiting the power of others, he achieved “one law” and...

View sample
The Effect of Laws & Regulations on Total Compensation