Nature vs. Culture in Odyssey

The imagery of nature and culture connects every scene from Book 9 to Book 12 in Odyssey. On the land of Cyclopes, Odysseus’s encounter with the one-eyed uncivilized giant unveils Odysseus’s cleverness as a civilized human being; Nevertheless, Odysseus eventually fails to overcome the flaw of human characteristic, as he tells Polyphemus about his real mortal identity when he is sailing away, which ultimately brings Poseidon’s revenge to Achaeans. At one point human civilization teaches Odysseus the skill of using wooden staff and wine to fight with Polyphemus’s strength, but the nature of superpower can easily surpass human beings’ wisdom.

Don't use plagiarized sources. Get your custom essay on
“ Nature vs. Culture in Odyssey ”
Get custom paper
NEW! smart matching with writer

When Circe in Book 11 turns Odysseus’s men into pigs, when the blind prophet Tiresias foretells Odysseus’s fate, and when Zeus punishes Odysseus with another storm, Odysseus and his men are powerless but accept their destiny.

For example, in book 10, when Circe turns Odysseus’s men into pig, Odysseus can only overpower Circe by following Hermes’ instruction: “Take this herb, which is one of great virtue, and keep it about you when you go to Circe’s house, it will be a talisman to you against every kind of mischief”(Book X, 54). When Odysseus “rushed at her with sword drawn”, Odysseus is in a position where he is even able to overcome the power of an immortal creature.

Both Polyphemus and Circe represent the power of nature, as their world does not have any law or morality, while odysseus’s journey represents the power of culture, as the man of culture defeats powerful immortal creatures through cleverness and self-restraint.

Nature vs. Culture in Odyssey. (2016, Apr 10). Retrieved from https://studymoose.com/nature-vs-culture-in-odyssey-essay 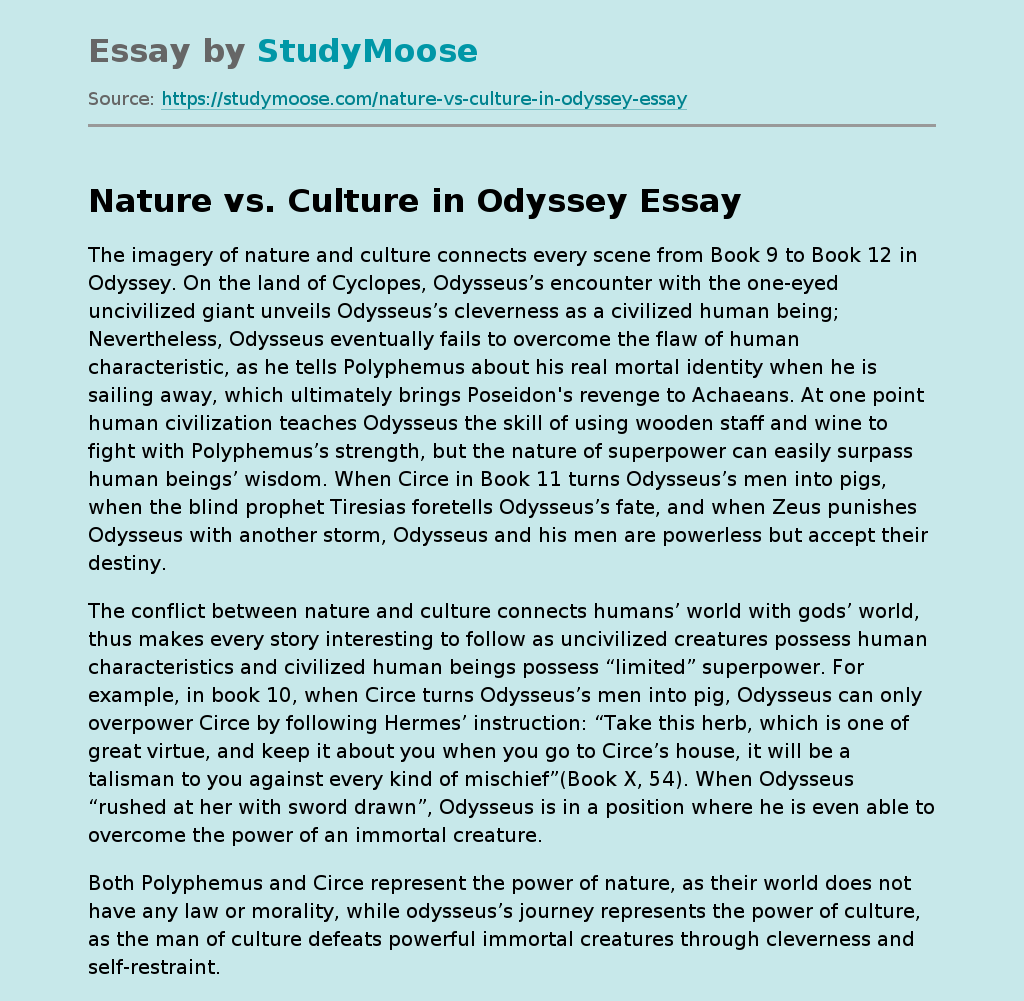