Nature of Revange In The Novel The Frankenstein

It makes your blood boil. Your eyes see red. Your fists clench so hard that they turn pale. It keeps you up at night, thinking and formulating plots on how to extract it. It flows through your body and mind like an uncontrollable rage, seething to be released. Revenge is toxic. And such a strong, violent emotion is fueled by a single act: an act of betrayal. Yet its effects are so lasting that it inflames wars of all sorts, from between two individuals to between two nations.

Don't use plagiarized sources. Get your custom essay on
“ Nature of Revange In The Novel The Frankenstein ”
Get custom paper
NEW! smart matching with writer

But oddly enough, this terrifying emotion has been the focus of many artists and authors, not because of its consequences but because of how intriguing it is. Despite its ferocity, revenge is perhaps one of the most humane emotions, on par with (and often going hand in hand with) love. One such author, Mary Shelley, exemplifies the very essence of revenge in her novel Frankenstein. In her novel, the protagnoist, Victor Frankenstein, is faced with continual conflict with his creation, the creature, creating an obsessive cycle of anger and disgust that inevitably leads both to their demise.

The cycle begins when Frankenstein first abandons the creature out of disgust, as soon as he creates the creature. Once the creature comes to realize this, he is angered. Frankenstein brought him into the world and abandonded him immediately simply because of his physical appearance. In one of his raging fits, the creature says “Frankenstein! You belong then to my enemy – to him towards whom I have sworn eternal revenge; you shall be my first victim” (130).

But more than just producing irrational thought, vengeance has an obsessive nature that eclipses other emotions and morals. It can transform a mind that knows nothing but innocence to one filled with hatred and loathing, just as it did with the creature. When first brought to life, the creature knew nothing; he could not speak, let alone have a grasp of human emotion and complex thought. But as he spent time learning how to speak English and adapting to human personalities, he came to realize his state of abandonment. “Cursed, cursed creator! Why did I live? Why, in that instant, did I not extinguish the spark of existence which you had so wantonly bestowed? I know not; despair had not yet taken possession of me’ my feelings were those of rage and revenge” (124). As he realizes this, the creature starts transforming from one that accidentally harms a little girl to one that that willingly kills Victor’s brother William just because of their relation. The creature’s obsession with revenge is further shown when he states that “revenge kept me alive; I dared not die and leave my adversary in being” (189). In other words, the creature has become a being whose sole existence is to extract vengeance rather than to try to fit into the society that fearfully rejected him. Furthermore, he refers to Victor as his “adversary” in life, instead of by his name or as his creator, suggesting the complete lack of respect and the embodiment of hatred the creature has towards him. At this state, the creature has reached his lowest point and gives up on trying to control his life; instead he seeks solace in controlling Victor’s.

Through both the creature and Victor’s quest for vengeance, the two inevitably lead each other towards mutual destruction. The escalating misery the creature causes on Victor’s life eventually leads to Victor breaking down and falling ill. Once he is nursed back to health, the creature confronts him, explaining his loneliness and sadness in the world in a calm, logical manner. He then finishes with the demand that it only be fair that Victor create a female counterpart for the creature, and if he does so, the creature would forgive Victor for his abandonment by leaving him—along with the rest of humanity—alone. As Victor debates it, the creature angrily adds “If you refuse, I will glut the maw of death until it be satiated with the blood of your remaining friends” (86). The creature’s scope for revenge has become so large that he now is willing to kill all of those related to Frankenstein to give him a slow, painful death. In other words, Frankenstein has no option but to comply to the creature or kill him. However, the creature is incredibly strong and agile, so Victor cannot kill him; this leaves him with one option: to comply. But once Victor comes close to creating this female counterpart, he realizes that he cannot bring another “creature” into the world and that one was already too many, so he kills the female. The creature sees this and, as promised, kills Elizabeth on the two’s wedding night. At this crossroad, both of their demises become inevitable. Victor needs the creature’s approval to live a happy life without having to fear for himself and his loved ones. The creature needs Victor if he wants any chance of another being like him to be created. But once both of them kill each other’s potential “wives”, they go down a road of immeasurable hate towards each other. Both of them need each other to live but neither of the two has each other’s approval. Therefore, Victor’s death on the boat, followed by the creature’s acceptance of his own death was unavoidable.

Through escalating acts of violence and hatred, Victor and the creature’s obsessive nature of showing anger led to each’s demise. Both needed each other to survive yet had to go through an incredible amount of pain and heartbreak as a result of the other, so the pair’s end was inevitable. Ironically symbolic, Shelley emphasizes the two’s foil-like nature and cyclic acts of anger by starting the book with the creature’s birth and ending with Victor’s death. Yet it is the creature who ends the novel with humanity as he comes to terms with his rash acts of anger while Victor never could. All in all, vengeance, like a disease, will consume and kill you if left unchecked. As clergyman Douglas Horton once said, “While seeking revenge, dig two graves—one for yourself.”

Nature of Revange In The Novel The Frankenstein. (2019, Aug 19). Retrieved from http://studymoose.com/nature-of-revange-in-the-novel-the-frankenstein-essay 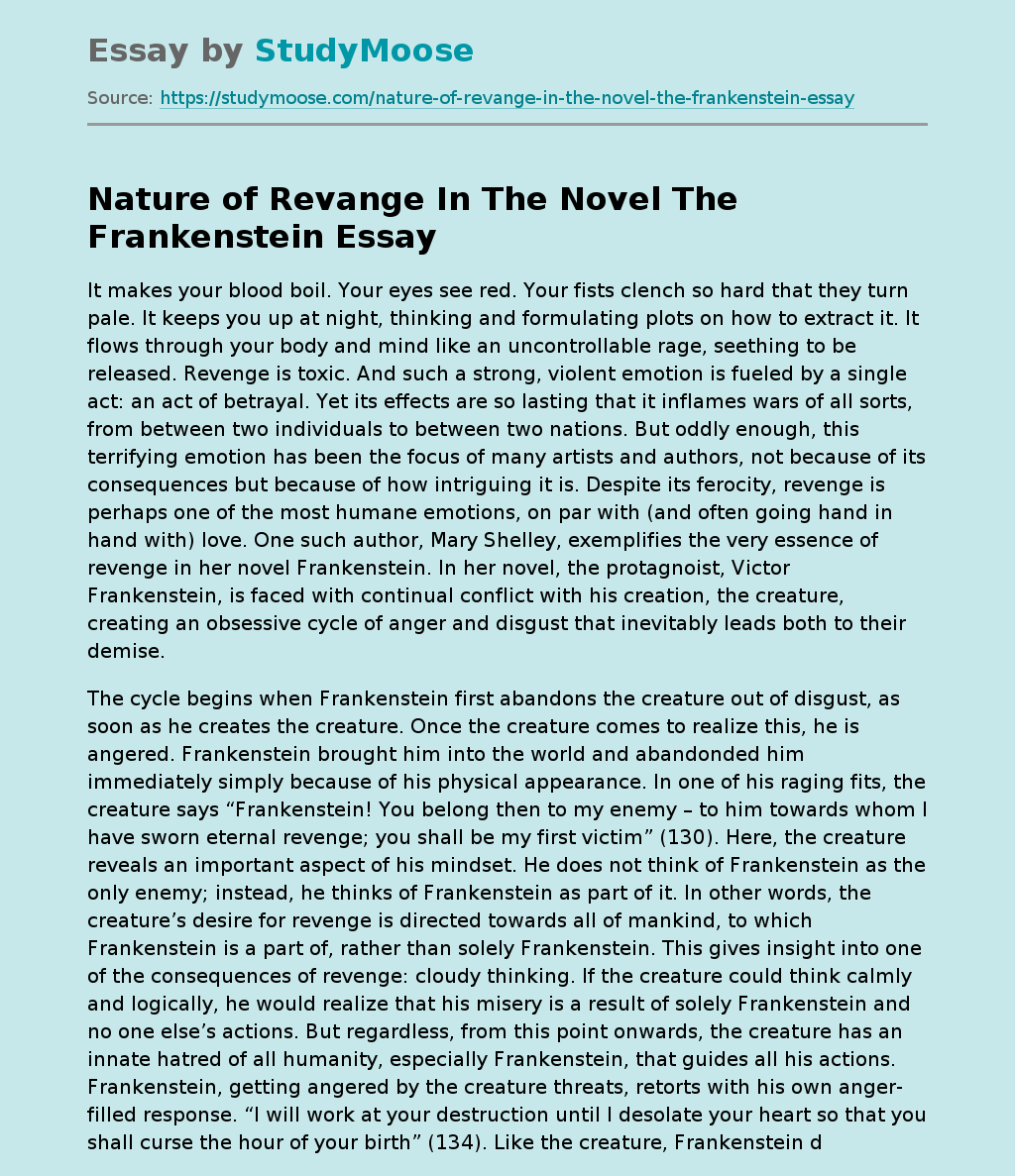