Nature of Power of Taxation

Hi Folks. Good morning! I’m Joliever Villanueva. for those who don’t know my names co’z I don’t know your names too.

Well’ going to discuss is about the NATURE OF POWER OF TAXATION.

– But First I want you to know the meaning of Sovereignty. Sovereignty in tagalong is Karapatang Mamahala. But how it relates to taxation?

1. The power of taxation is inherent in Sovereignty, it is essential or important to the existence of every government.

– But why? Why do you think it is important? Any guest?
– Where do you think the funds of the government came from to build schools, hospitals and roads?

Taxation is important because it is the source of the fund that being used to build the public establishments and services.

Turn in your highest-quality paper
Get a qualified writer to help you with
“ Nature of Power of Taxation ”
Get high-quality paper
NEW! AI matching with writer

-Therefore, even though there’s no written law about the taxation the government can still impose taxes.

2. It is legislative in characters.

But if the taxation is implemented by the constitution the power of taxation is legislative in character.

It cannot be exercised by the executive or judicial branch of the government.

The power to tax is also granted by the constitution to local government subject to such guidelines and limitations as provided by law.

3. It is subject to constitutional and inherent limitations.

The power of taxation is subject to certain limitations. Most of these limitations are specifically provided in the fundamental low or implied therefrom while the rest spring from of the taxing power itself.

– As we know guys here in the Philippines we have taxes but those taxes are guided by the fundamental law. Which means it also have limitations or grounds.

=Sir do you have anything to add or share with us regarding this topic?

(We can say that our tax system is sound or strong if these three basic principles are existing in our government.

-If one of them is missing the tax system would be weak hence our economy will collapse.

What are these Principles

1. Fiscal Adequacy. Is a principle which means that the source of revenue should be sufficient to meet the demands of public expenditures

= for example the government needs a hundred million for the public expenditure or to build schools. Our tax system should be able to provide the required amount of money from taxes.

2. Equality or theoretical justice means that the tax burden should be proportionate to the tax payer’s ability to pay. This is the so-called Ability to pay principle.

= the tax that will be levy to a person should be a fair to the average tax payer.

The tax payer A. which is single will pays higher than to tax payer be Which has dependants of three children. 3. Administrative Feasibility means that tax laws should be capable of convenient, just and effective administration.

So I believe that a Nation of faithful tax payers assures the healthy economy for everybody to enjoy.

End of my report.

Nature of Power of Taxation. (2016, Nov 08). Retrieved from https://studymoose.com/nature-of-power-of-taxation-essay 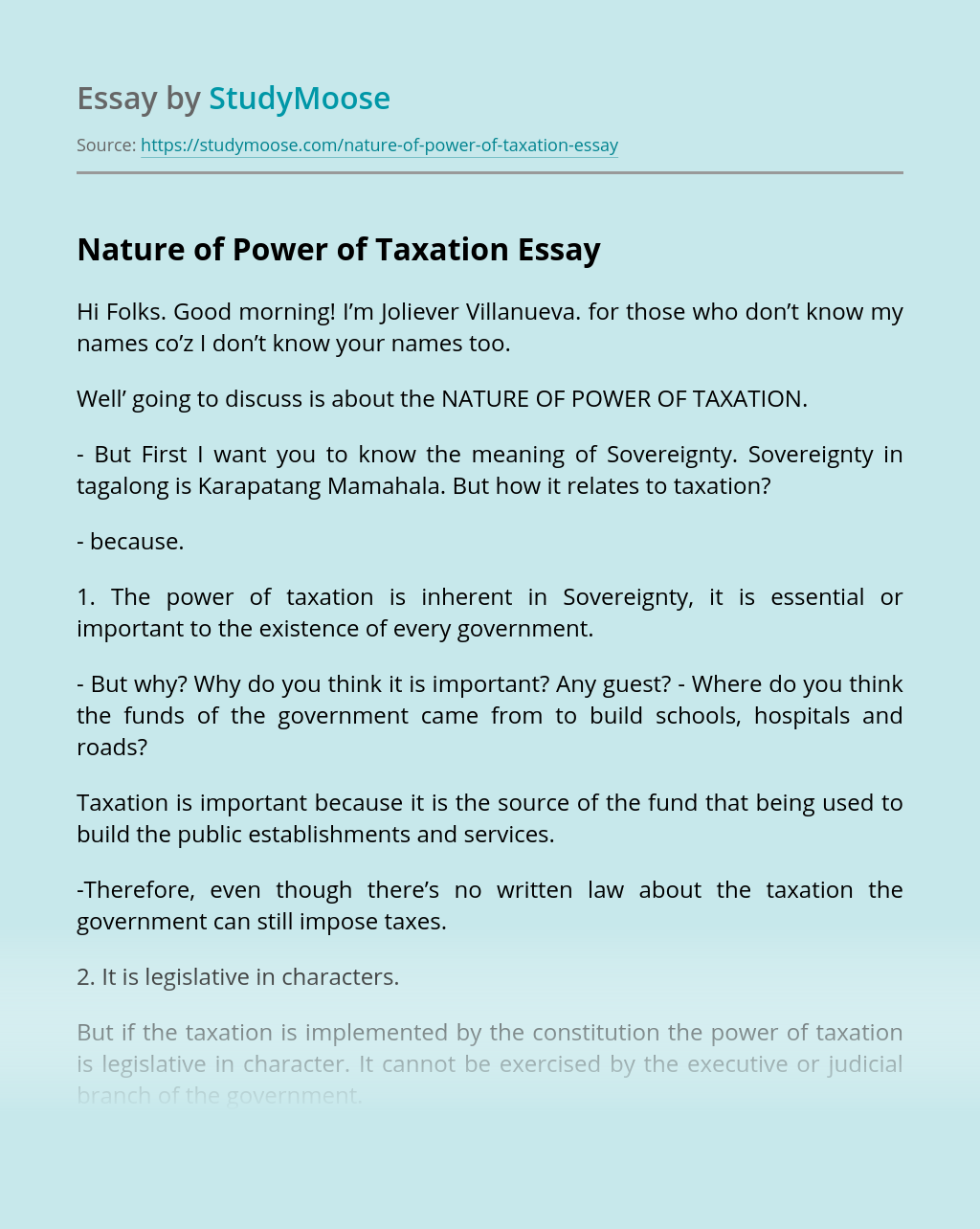 Turn in your highest-quality paper
Get a qualified writer to help you with
“ Nature of Power of Taxation ”
Get high-quality paper
Helping students since 2015
Stay Safe, Stay Original