1. Sign, Signified Signifier Some people regard language, when reduced to its elements as a naming-process only–a list of words, each corresponding to the thing that it names. For example: operation–an assumption that is anything but true. But this rather naive approach can bring us near the truth by showing us that the linguistic unit is a double entity, one formed by the associating of two terms.

We This conception is open to criticism at several points. It assumes that ready-made ideas exist before words; it does not tell us whether a name is vocal or psychological in nature (arbor, for instance, can be considered from either viewpoint); finally, it lets us assume that the linking of a name and a thing is a very simple have seen in considering the speaking-circuit that both terms involved in the linguistic sign are psychological and are united in the brain by an associative bond.

Don't use plagiarized sources. Get your custom essay on
“ Nature of Linguistic Sign by Ferdinand de Saussure ”
Get custom paper
NEW! smart matching with writer

This point must be emphasized. The linguistic sign unites, not a thing and a name, but a concept and a sound-image.

The latter is not the material sound, a purely thing, but the psychological imprint of the sound, the impression that it makes on our senses.

The sound-image is sensory, and if I happen to call it “material,” it is only in that sense, and by way of opposing it to the other term of the association, the concept, which is generally more abstract. The psychological character of our sound-images becomes apparent when we observe our own speech.

Without moving our lips or tongue, we can talk to ourselves or recite mentally a selection of verse. Because we regard the words of our language as sound-images, we must avoid speaking of the “phonemes” that make up the words. This term, which suggests vocal activity, is applicable to the spoken word only, to the realization of the inner image in discourse.

We can avoid that misunderstanding by speaking of the sounds and syllables of a word provided we remember that the names refer to the sound-image. The linguistic sign is then a two-sided psychological entity that can be represented by the drawing: The two elements are intimately united, and each recalls the other. Whether we try to find the meaning of the Latin word arbor or the word that Latin uses to designate the concept “tree,” it is clear that only the associations sanctioned by that languageappear to us to conform to reality, and we disregard whatever others might be imagined. Our definition of the linguistic sign poses an important question of terminology.

I call the combination of a concept and a sound-image a sign, but in current usage the term generally designates only a sound-image, a word, for example (arbor, etc.). One tends to forget that arbor is called a sign only because it carries the concept “tree,” with the result that the idea of the sensory part implies the idea of the whole. Ambiguity would disappear if the three notions involved here were designated by three names, each suggesting and opposing the others.

I propose to retain the word sign [signe] to designate the whole and to replace concept and sound-image respectively by signified [signifié] and signifier [signifiant]; the last two terms have the advantage of indicating the opposition that separates them from each other and from the whole of which they are parts. As regards sign, if I am satisfied with it, this is simply because I do not know of any word to replace it, the ordinary language suggesting no other. The linguistic sign, as defined, has two primordial characteristics. In enunciating them I am also positing the basic principles of any study of this type.

2. Principle I: the Arbitrary Nature of the Sign The bond between the signifier and the signified is arbitrary. Since I mean by sign the whole that results from the associating of the signifier with the signified, I can simply say: the linguistic sign is arbitrary. The idea of “sister” is not linked by any inner relationship to the succession of sounds s--r which serves as its signifier in French; that it could be represented equally by just any other sequence is proved by differences among languages and by the very existence of different languages: the signified“ox” has as its signifier b--f on one side of the border and o-k-s (Ochs) on the other.

No one disputes the principle of the arbitrary nature of the sign, but it is often easier to discover a truth than to assign to it its proper place. Principle I dominates all the linguistics of language; its consequences are numberless. It is true that not all of them are equally obvious at first glance; only after many detours does one discover them, and with them the primordial importance of the principle. One remark in passing: when semiology becomes organized as a science, the question will arise whether or not it properly includes modes of expression based on completely natural signs, such as pantomime. Supposing that the new science welcomes them, its main concern will still be the whole group of systems grounded on the arbitrariness of the sign.

In fact, every means of expression used in society is based in principle on collective behavior or–what amounts to the same thing–on convention. Polite formulas, for instance, though often imbued with a certain natural expressiveness (as in the case of a Chinese who greets his emperor by bowing down to the ground nine times), are nonetheless fixed by rule; it is this rule and not the intrinsic value of the gestures that obliges one to use them.

Signs that are wholly arbitrary realize better than the others the ideal of the semiological process; that is why language, the most complex and universal of all systems of expression, is also the most characteristic; in this sense linguistics can become the master-pattern for all branches of semiology although language is only one particular semiological system. The word symbol has been used to designate the linguistic sign, or more specifically, what is here called the signifier. Principle I in particular weighs against the use of this term.

One characteristic of the symbol is that it is never wholly arbitrary; it is not empty, for there is the rudiment of a natural bond between the signifier and the signified. The symbol of justice, a pair of scales, could not be replaced by just any other symbol, such as a chariot. The word arbitrary also calls for comment. The term should not imply that the choice of the signifier is left entirely to the speaker (we shall see below that the individual does not have the power to change a sign in any way once it has become established in the linguistic community); I mean that it is unmotivated, i.e. arbitrary in that it actually has no natural connection with the signified.

3. Principle II: the Linear Nature of the Signifier The signifier, being auditory, is unfolded solely in time from which it gets the following characteristics: (a) it represents a span, and (b) the span is measurable in a single dimension; it is a line. While Principle II is obvious, apparently linguists have always neglected to state it, doubtless because they found it too simple; nevertheless, it is fundamental, and its consequences are incalculable. Its importance equals that of Principle I; the whole mechanism of language depends upon it.

In contrast to visual signifiers (nautical signals, etc.) which can offer simultaneous groupings in several dimensions, auditory signifiers have at their command only the dimension of time. Their elements are presented in succession; they form a chain. This feature becomes readily apparent when they are represented in writing and the spatial line of graphic marks is substituted for succession in time. Sometimes the linear nature of the signifier is not obvious. When I accent a syllable, for instance, it seems that I am concentrating more than one significant element on the same point. But this is an illusion; the syllable and its accent constitute only one phonational act. There is no duality within the act but only different oppositions to what precedes and what follows. 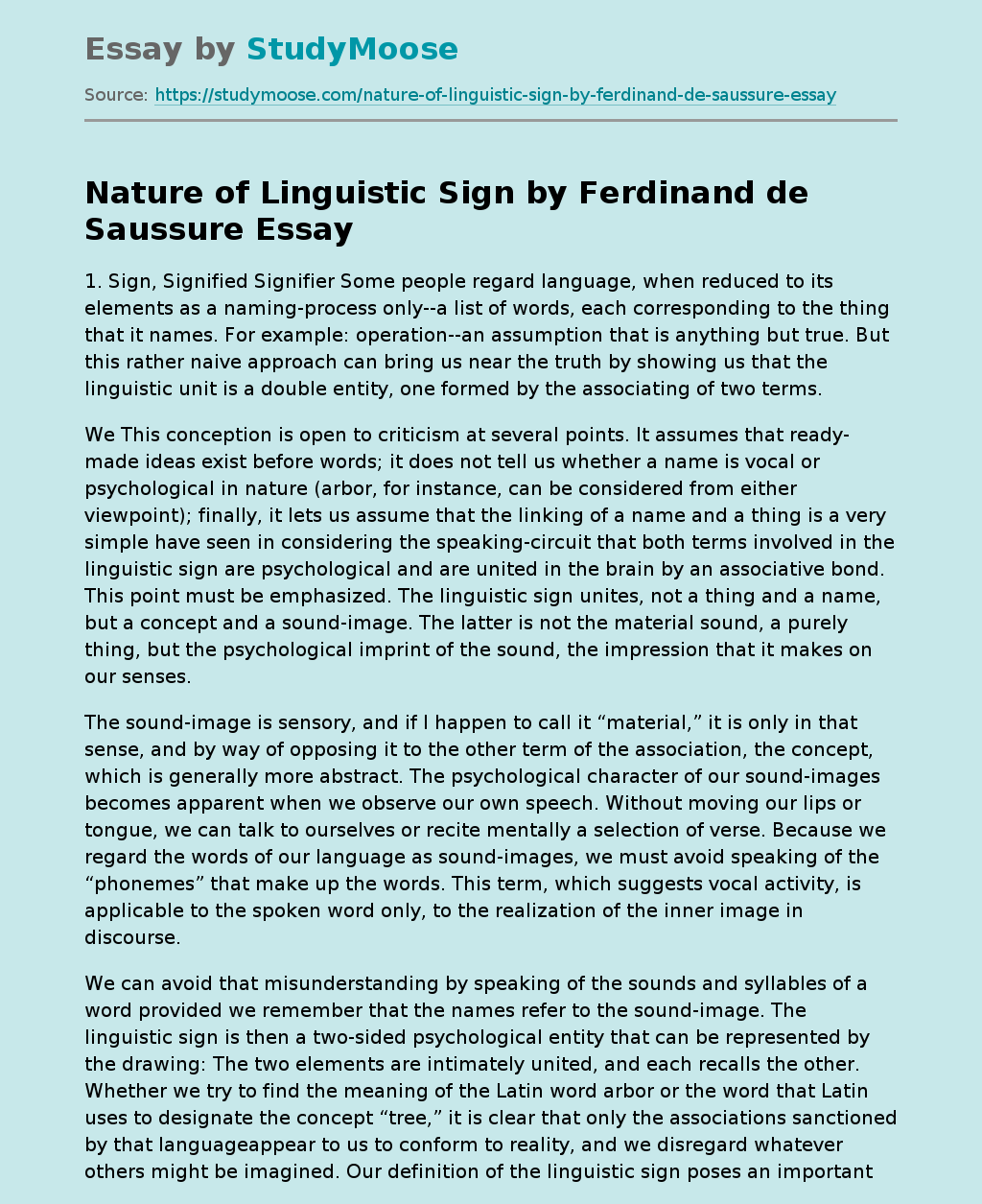