Public policy addresses a host of issues like housing, transportation, education, health, social services, among others. It creates orderly structures and standards, and a sense of direction. It may likewise be used to denote what is actually done even though it is unplanned, and yet sometimes it attends to political questions and even the personal issue or controversy of a political. In making public policy, there are three components: the problem, the players, and the policy itself. A problem is a particular apprehension that often requires specific resolution.

Don't use plagiarized sources. Get your custom essay on
“ Nature and Thrust of Public Policy ”
Get custom paper
NEW! smart matching with writer

The players refer to the actors or group of actors that design specific formula to tackle the issue at hand, while policy is the finished course of action ready for implementation.

Defining Public Policy
Public policy was defined by Dye as “whatever governments choose to do or not to do.”However, another political analyst, Roskins modified this definition in this wise: public policy is “whatever the government does to do or not to do.” Policy, in general, is a course of action or a series of program adopted by a group or a person or a government in view to address or respond to existing issues or concerns.

The term public is associated to a government I power. Public policy then is an action taken by the government to meet a particular demand growing out of the society.

Public Policy Analysis
Public policy is the study of how governmental policies are made and implemented, and the application of available knowledge to governmental
policies for improving their formulation and implementation. Policymaking Process

Policymaking is a process in two aspects. First, it involves a linked series of actions or events. This commences with the germination of ideas and the initiations of proposals, continues with some form of debates, analysis, and evaluation; and concludes with the making of formal decisions and their implementation through designated actions. Second, it is a process in the sense that distinguishes the ‘how’ of the government from the ‘what’ of government. Policymaking process has four stages namely:

Policy initiation process, policy formulation process, policy implementation process and policy evaluation process. Policy Initiation/Agenda Setting The first question to ask here is: “Where does policy come from? How do policy agenda emerge?” Initiation is the primary stage of policy agenda that resulted from an issue regarded to come out as a problem if not attended to appropriately. Agenda setting is the process by which ideas or issues bubble up through the various political channels to wind up for consideration by a political institution such a legislator or court.

Anthony Downs attempts to explain the way in which many policy problems evolve on the political agenda. Downs in Shafritz (2009) said that the cycle consists of five steps: 1. The pre-problem stage;

2. Alarmed discovery and euphoric enthusiasm;
3. Recognition of the costs of change;
4. Decline of public interest: and
5. The post-problem stage

Nature and Thrust of Public Policy. (2016, Apr 27). Retrieved from https://studymoose.com/nature-and-thrust-of-public-policy-essay 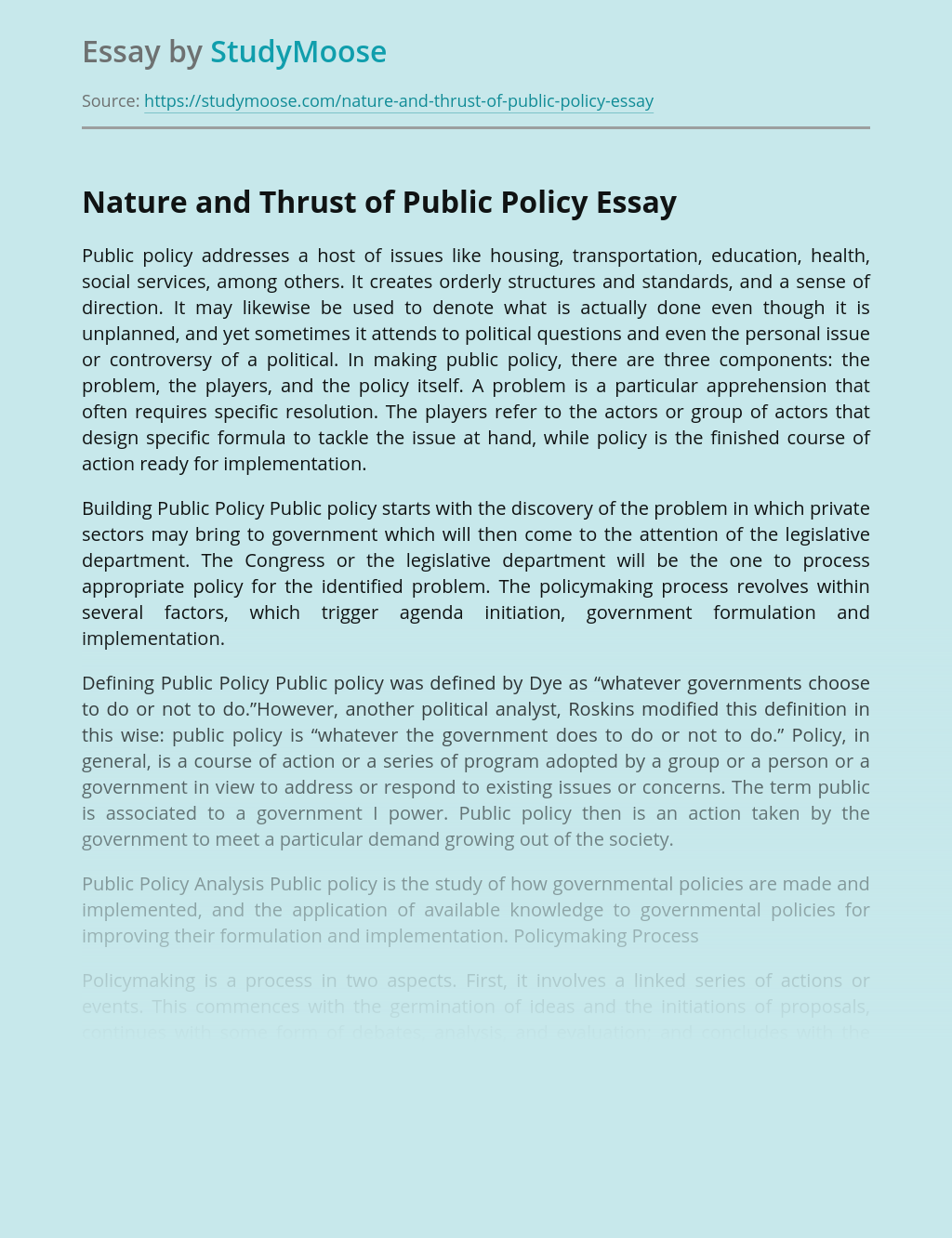