Mabo and others v State of Queensland (No.2 (1992) HCA 23, is arguably one of the most famous native title claims in Australian history. This case was the first in Australian history to successfully overturn Terra Nullius and essentially led to the creation of the Native Title Act 1993 (Cth) (‘The Act’). Terra nullius means land belonging to no one or land that has never been subject to sovereignty of any state and is a part of International Law. The majority of Indigenous People view terra nullius in a negative way, as this term had been used as a means for justifying invasion or takeovers of traditional land.

The result of terra –nullius on ATSI (Aboriginal and Torres Straight Islanders) meant that they have suffered countless wrong doings and injustice towards them.

ATSI were not seen as official Australian citizens according to the law until 1967. This meant the law offered no protection of basic human rights or land rights resulting in large losses of spiritually significant land.

The first case to take legal action over land rights was the 1971 Gove land rights case. The Yolngu people took legal action against Nabalco Mining Company in the Northern territory Supreme Court. The Yolngu people claimed that Nabalco Mining were illegally mining on their land (the Gove peninsula) without approval. However a number of set backs were encountered such as terra nullius not allowing for native title and the Doctrine of Reception which effectively outlined that once a country (in this case Britain) has colonized a territory, that country’s law now automatically applies, overruling any previous laws that were once in place.

For the Yolngu people this unfortunately meant that their claim was rejected in 1971 (by Justice Blackburn) as the Australian legal system did not have to abide by Native Yolngu land laws. This caused further cultural divide between the Indigenous customary law and the English legal system.

“Native title is the right of Indigenous people to their traditional land.”(Cambridge Legal Studies, preliminary, pg 98). The English legal system had a very different approach when it came to property rights, Aboriginal Peoples divided land according to the amount of space needed to provide for a large number of people in accordance to how much food there was available in that area, for example clans living near coastal regions need far less space to find food than a clan living in the outback as food there is few and far between, this is how land was divided. Were in contrast to the English system we see individual property rights

Eddie Mabos lifelong battle for social, human and land rights for the Torres Straight People is an admirable one still remembered today as the first successful claim of Native Title and the first overturning of terra nullius. The Doctrine of reception made the challenge of proving traditional ownership even more difficult unlike past cases such as the 1971 Gove land rights case. Murray Island was different Murray Island had distinct borders; it also had a mythical God called Malo (pronounced Mare). Malo is the source of Meriam heritage and culture.

Malo can be seen as a form of Common Native Law. Land ownership, responsibilities; religious beliefs and ritual dances were all covered within Malo law providing the groundwork of an affective case against the state of Queensland. Malo has existed for as long as the Island and its Native People and was therefore a valid piece of evidence in both Mabo cases. Eddie Mabo was able to prove that land was passed down from father to son, generation to generation thanks to Malos law and tribal dances. “Malo, or Bomai, which is his secret and more sacred name, established the laws which decreed that clans must keep to their own paths, ‘swim with their own kind’, sow their lands and conserve the seas. – From Malo – Bomai topic in Mabo – The Native Title Revolution.

The affective criterion for achieving justice involves a number of elements each being interdependent of one another and only when used as a whole can are they of any good affect. When assessing the effectiveness of Native Title Law Reform fairness, equality, access and efficiency need to be considered. As fairness has been a large issues of concern for Aboriginal People in the Past, Civil disputes involving Aboriginal land rights certainly begs the questions of who is at fault? When taking legal action for Native Title claims the plaintiff must prove that they owned the land previously and are therefore entitled to claim it. Burden of proof has not been fair in this situation as the Traditional Land was not received lawfully but was taken from underneath them without a leg to stand on.

Therefore if this system were to be fair than it should be up to the owners of the land to prove they came by the land in agreement with Traditional Indigenous Owners. The second issue is equality. Equality is difficult to achieve as the law can lead to injustice if everyone is treated the same. Disadvantaged people may include, Indigenous and Torres Straight Islanders, young, economically disadvantaged and the elderly, the same may be applied to access. And finally efficiency, efficiency means weighing up the cost of achieving a goal for example financial cost, time, and human resources all add up and if the cost outweighs the result than that in some cases can be seen as a negative result.

In conclusion steps to repairing past damage and injustice inflicted upon the Aboriginal And Torres Straight Islander People are progressing yet it is still unbelievably difficult for ATSI people to claim any compensation thanks to large disadvantages in all aspects of the law. Resources are costly and access can be difficult for some people in their situation therefore they are still being put second best in the eyes of the law and Justice has not been achieved for the ATSI people meaning that although Native Title Law Reform is a step in the right direction we still have a very long way to go before true equality is reached.

The High Court Recognition of Native Title – The Mabo Judgment and Its Implications, 2012 Treaty Republic, accessed 9 May 2014, . 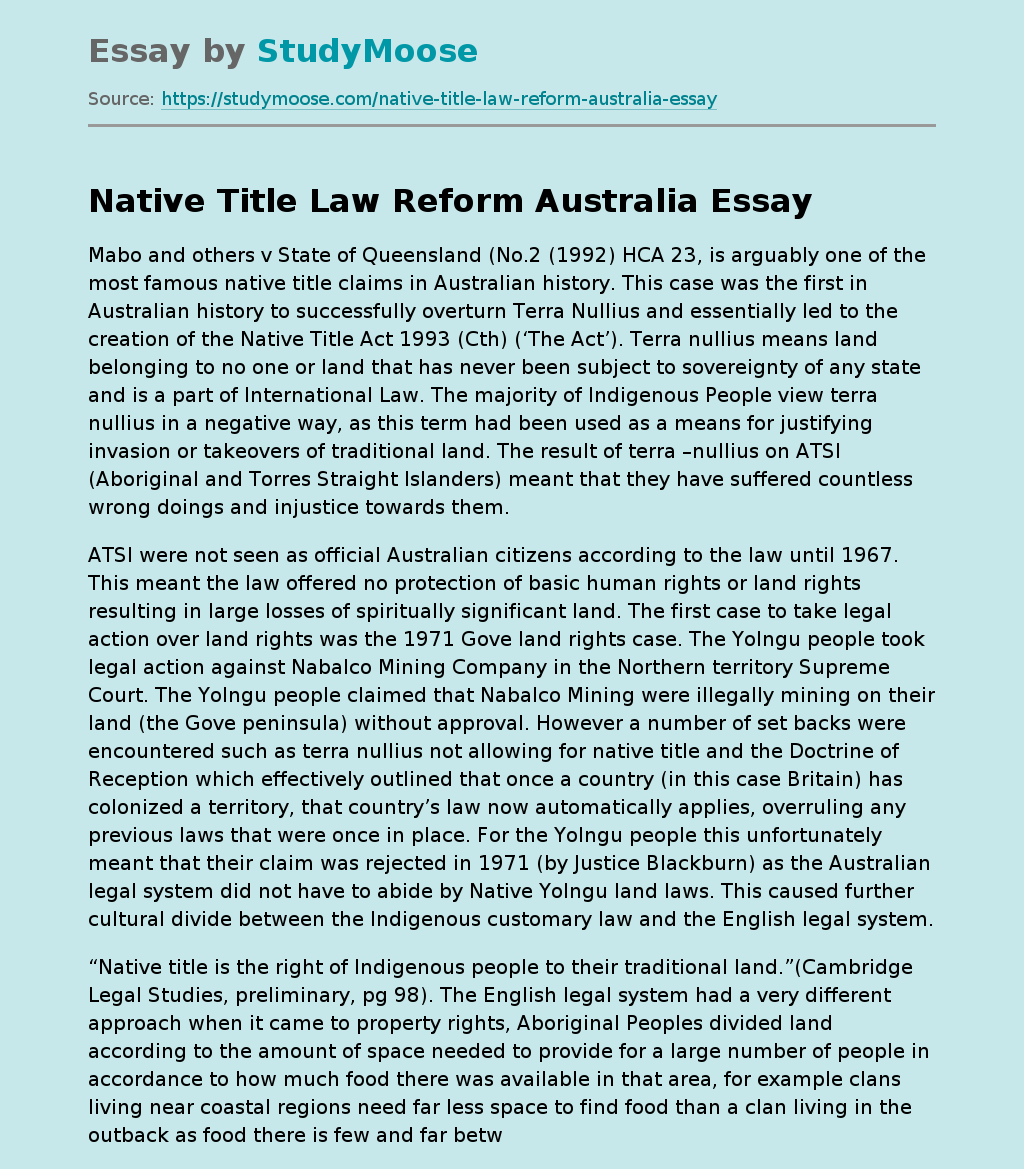