Native Americans in "The Pearl" by John Steinbeck

Steinbeck’s The Pearl is one of his most intriguing pieces. Steinbeck manages to fit many different ideas into a short novella that is under a hundred pages. However, what makes The Pearl truly a great book is his critique of colonial society, and the interaction of Native Americans and colonists. Steinbeck emphasizes the differences between the colonists and the native Indians by using such symbols as the relationship between town and village, education, and instinct. Steinbeck also shows that he views changing one’s station, or attempting to, as foolish and impossible, but that trying to is needed to provide an example for others.

Turn in your highest-quality paper
Get a qualified writer to help you with
“ Native Americans in “The Pearl” by John Steinbeck ”
Get high-quality paper
NEW! AI matching with writer

In this quote, Steinbeck emphasizes the stark difference between the village, made of simple materials, and the town, made of expensive materials. Steinbeck also uses the town’s buildings as a metaphor for the people within, as Steinbeck describes the buildings as having “harsh outer walls,” but having “inner cool gardens.” This could be a metaphor for the people within the building, portraying the people inside them as, at once, very kind and nice, but only once those walls had been let down.

This shows the colonists as being very xenophobic, and being kind to their own race but “harsh” to other races.

Steinbeck’s next way to differentiate between the colonists and the Native Americans is using their instinctual actions. Steinbeck shows that the colonists and Native Americans are instinctively different, thus he attempts to give an excuse, or perhaps a reason, for the differences between them, and their outcomes. Steinbeck explores into the instinctual differences between the Native Americans and the colonists in the following quotes:”There was sorrow in Kino’s rage, but this last thing had tightened him beyond breaking. He was an animal now, for hiding, for attacking, and he lived only to protect himself and his family… [despite his need for a canoe,]…never once did it occur to him to take one of the canoes of his neighbor.” (Steinbeck, pg. 42)

Steinbeck says that Kino was an animal who “lived only to protect himself and his family,” showing that he did it as an instinctive defense, and that he only becomes an animal to protect his family. Steinbeck also emphasizes that Kino becomes his animal alias only when he needs to hide or protect himself. This shows that Kino’s people have developed this as a natural defense, and its use is only for defense. This also shows that his people developed it for need of defense, and that continual need of protection is the only reason such a protection would be needed, and there is only one source for this continuous onslaught, and that is the colonists.

Steinbeck also goes so far as to say that the instinctive animal that Kino becomes retains all of the qualities that Kino retains, even so far as his lack of will to steal from his own kind. This shows that Kino’s alias does not seek survival of Kino as a person, but Kino’s race as a whole. He is unwilling to take from his people, as his alias is unwilling to damage itself. If his alias is for the protection of a whole group of people, then they must be under attack from a large group of people, giving us the structure of the assumption that the colonist society persecutes the Native Americans and the Native Americans have developed instincts for their protection.

“…the strangers came with argument and authority and gunpowder to back up both. And in the four hundred years [since,] Kino’s people had learned only one defense- a slight slitting of the eyes and a slight tightening of the lips and a retirement. Nothing could break down this wall, and they could remain whole within the wall.” (Steinbeck, pg. 17)In this quote Steinbeck shows another instinct, reclusion behind an inner shell, the creation of which has been directly linked to the coming of colonist society. However, this reaction shows more of the actual standpoint of the Native American society, as reactive, and unable to be proactive. This reactivity means that the situation will remain the same, and if this was the way that Kino’s ancestors were and will be, then this situation will remain the same until stopped by outside intervention.

This also shows that the Native American society has chosen to preserve itself within their shell, and to submit outside of it. Whenever attacked outside of the shell, they shelter inside their shell of refusal to change, as shown in the above quote. This results in the situation remaining a perfect clone of the situation that it was when it started, resulting in continuing colonist oppression. If the only place that they can take refuge is within personal shell, then they cannot control anything outside their shell, and they are therefore powerless outside their shell.

The colonist society, as a whole, exerts their control over the Native American population using the yoke of education.

“This is our one chance… [our son] must break out of the pot that holds us in.” (Steinbeck, pg. 103)Steinbeck here shows what that the Native Americans see lack of education as a “pot that holds us in.” This also shows that they do not get any chances to learn, for if they did, then they would have more than “one chance.” As the only way they can learn is to be taught by an educated person, and the only educated people are the colonists, the colonists must be withholding education. This shows that the colonists might be intentionally trying to keep the Native Americans in their “pot.” It is also interesting that this “pot” is probably the same as the “shell” that the Native Americans hide in.

If the colonists planted the knowledge that the books were reliable, being the only people who could read the books, anything and everything that they said about the books, if not a lie, was true. And as the Native Americans did not know when people were lying, anything that a colonist said could be definitely accurate, or a lie. The risk seemed too much and the Native Americans usually did as they said, as Kino does, because they are afraid of matching their “certain ignorance against [the colonists’] possible knowledge.”Steinbeck also continually shows that the colonists use their control of religion, through their knowledge of education, as another way of controlling the Native American populace.

“It was a good idea, but it was against religion…The loss of the pearl[s] was a punishment visited on those who tried to leave their station. And the father made it clear that each man and woman is…a soldier sent by god to guard some part…of the Universe….But each one must remain faithful to his post and must not go running about, else the castle is in danger from the assaults of Hell….” (Steinbeck, pg. 42)This shows that the colonists use their knowledge of religion, due to their reading ability, to keep the Native Americans thinking that they are doing God’s will, or, if they believe otherwise, do so out of fear of being incorrect. The colonists tell the Native Americans that they have to stay in their current position in life, living as poor peasants who treat the colonists as royalty, because that that is God’s will. Because the Native Americans are unsure of what is correct, they take what is, to them, the safer approach, by doing as the colonists say.

The colonists also bring in faith, by saying that if they are not faithful to their post, and thus not faithful to their religion, which would be considered blasphemy by the religious Native Americans, then they would be in danger of the attack from the “assaults of hell,” which could be interpreted as going to hell, which the religious Native Americans would be very afraid of.

“…I heard him make that sermon…he makes it every year.”This shows that the colonists try to keep the Native Americans in line, and that it is, again, a group effort and that the entire colonist community works as one in achieving their goal, the exploitation of the Native American society. This also shows that they do this repeatedly, and probably have for been using the same methods for centuries. This also shows that this oppression is not a one-time thing, and that it is a continuous, calculated, malicious oppression of a race.

Native Americans in "The Pearl" by John Steinbeck. (2021, Jul 25). Retrieved from https://studymoose.com/native-americans-in-the-pearl-by-john-steinbeck-essay 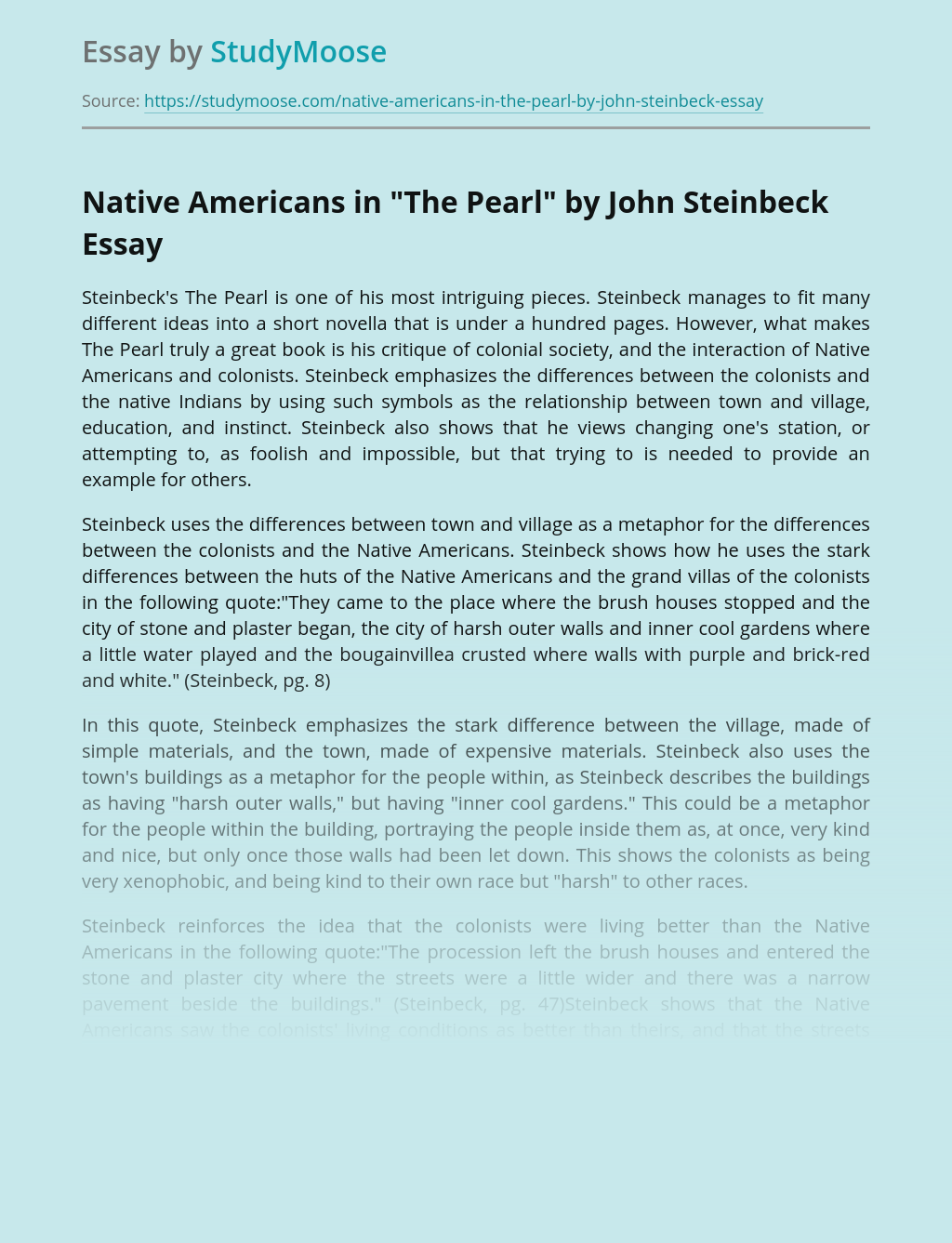 Turn in your highest-quality paper
Get a qualified writer to help you with
“ Native Americans in “The Pearl” by John Steinbeck ”
Get high-quality paper
Helping students since 2015
Stay Safe, Stay Original