The Native American culture is diverse in different aspects such as music, dances, performances and even arts. They have a variety of musical instruments and dancing styles. Each dance is performed during different occasions or activities. The Native Americans had different attires which were worn during different ceremonies such as religious functions, rituals and community gatherings (Leco Para 9). An example of the native ceremonies is the powwow. This is a gathering which is mainly composed of different Indian tribes. It involves different activities such as dancing competitions, narrating stories and other contests.

Don't use plagiarized sources. Get your custom essay on
“ Native American Culture ”
Get custom paper
NEW! smart matching with writer

These are activities which usually take place over the weekend in different areas and everyone is invited to attend this function (Leco Para 10). There are different types of dances such as jingle dance, war dances and other communal dances. The jingle dance is mostly a contest for women and the dancing attire is decorated with metallic material. Other dances include scarf dance which is performed in a bird like manner.

The dress for this type of dance is painted and surrounded with beads (Leco Para15). There are different war dances which are mainly performed by the men.

These include fancy dance and grass dance. The attires are decorated in different colors of beads, furs and feathers. The other kind of dance is the Kiowa gourd dance which is performed basically for the purpose of remembering great elders and warriors from different tribes. The Kiowa dance is for everyone including the spectators. This kind of dance brings people together and it serves to enhance peace and unity.

The Native American flute was a wooden type of flute. It has a whistle like mouth piece and was an important instrument in most occasions and ceremonies. The way it was curved is very different compared to the flutes found in Asia, Europe and Africa. The different types of flutes were made from different materials such as cedar, sweet grass and river cane. These flutes include black arrow flutes and Turtle Island flutes. The flutes were carried in bags made from deer skin (Native Languages of the Americans, Para 7). Flute bag Source: Native Languages of the Americans website

Native American Drums The Native Americans had different types of drums such as Hoops drums, Shamanic drums, Foot drums, Powwow drums, Tom Tom drums and water drums. The hoop drums were used in different kinds of rituals and other ceremonies. They vary in diameter and are held in the hands. They produce different kinds of tunes depending on the diameters. Those that are big produce a deep voice compared to the smaller ones. These drums are normally made up of different kinds of materials such as skin and hides. They are painted in patterns using different colors (Godbole, Para 3).

Shamanic drums are mostly used as tools used to connect with spirits. This practice is known as shamanism and it is a certain kind of ritual. There are different tribes that practiced shamanism such as Lakota tribe which is found in the North America. It helps in connecting these people to a completely different world when they are in a good state of mind. These drums are used during a number of performances and rituals (Godbole, Para 4). Shamanic drum Source: Native Languages of the Americans website The powwow drum is a special kind of drum used for a specific type of ritual known as the powwow.

The powwow is a well known event among the Native Americans. This event involves a group of people who are involved in drumming. It is a drum which is bigger in size and requires a group of people to play it (usually 8 men) (Godbole Para 5). Powwow Drum Source: Native Languages of the Americans website The foot drum was used by tribes such as Hopi, Aztec, Miwok and Maidu. It’s a unique type of drum among the Native Americans in that it is played using the foot. They were made from hollow logs of wood which were struck using poles and this was followed by resonance from these drums.

The Tom Tom drums were small drums which were easily held by the hands. They are longer and narrower in design. Contrary to other types of drums, the hands are used to play the Tom Tom drums (Godbole Para 6). On the other hand, water drums are made of wood and filled with water. The water drums occur in two different types namely; Iroqusi and Yaqui. There are other types of drums such as Tarahumara, apache drums and Lakota. These are, however, less popular than those mentioned above. Every music in the Native American culture had to be accompanied with a drum.

This is due to the fact that the people believed that this was the only way to reach the spirits hence the only way to communicate with the gods (Godbole, Para 7). Water drum Source: Native Languages of the Americans website Tribes and Traditions The Native Americans consisted of different tribes each with unique types of traditions and cultures. Some of these tribes include Sarasi, Ute, Kiowa, Hidutsa among others. Each tribe had its own form of rituals and activities. They were involved in several ceremonies most of which were religious gatherings and rituals.

An example of such ceremonies is the Sun dance which was attended by large groups of people. Sacrifices were made during this ceremony to ensure that peace prevails in the community. This ceremony was carried out by a priest who was well known in the community. The Native Americans had different kinds of traditions such as healing traditions (Desy Para. 4). Most of the modern forms of healing have their roots in the Native American culture. Every tribe had its own elder who was a healer. In addition to being herbalists, these elders were also designated the duty of connecting the people with the spirits.

The tribes believed in dreams which were translated so as to know the meaning. The people had a unique way of ending quarrels by using the “Talking Sticks” These were passed from one person to the next during meetings. It was a way of showing respect to others. Other traditions include cleansing rituals and the use of animals as guides. The latter implies that when an animal was seen either in real life or in a dream, it was believed that they were a form of guides from the gods (Desy Para. 6). 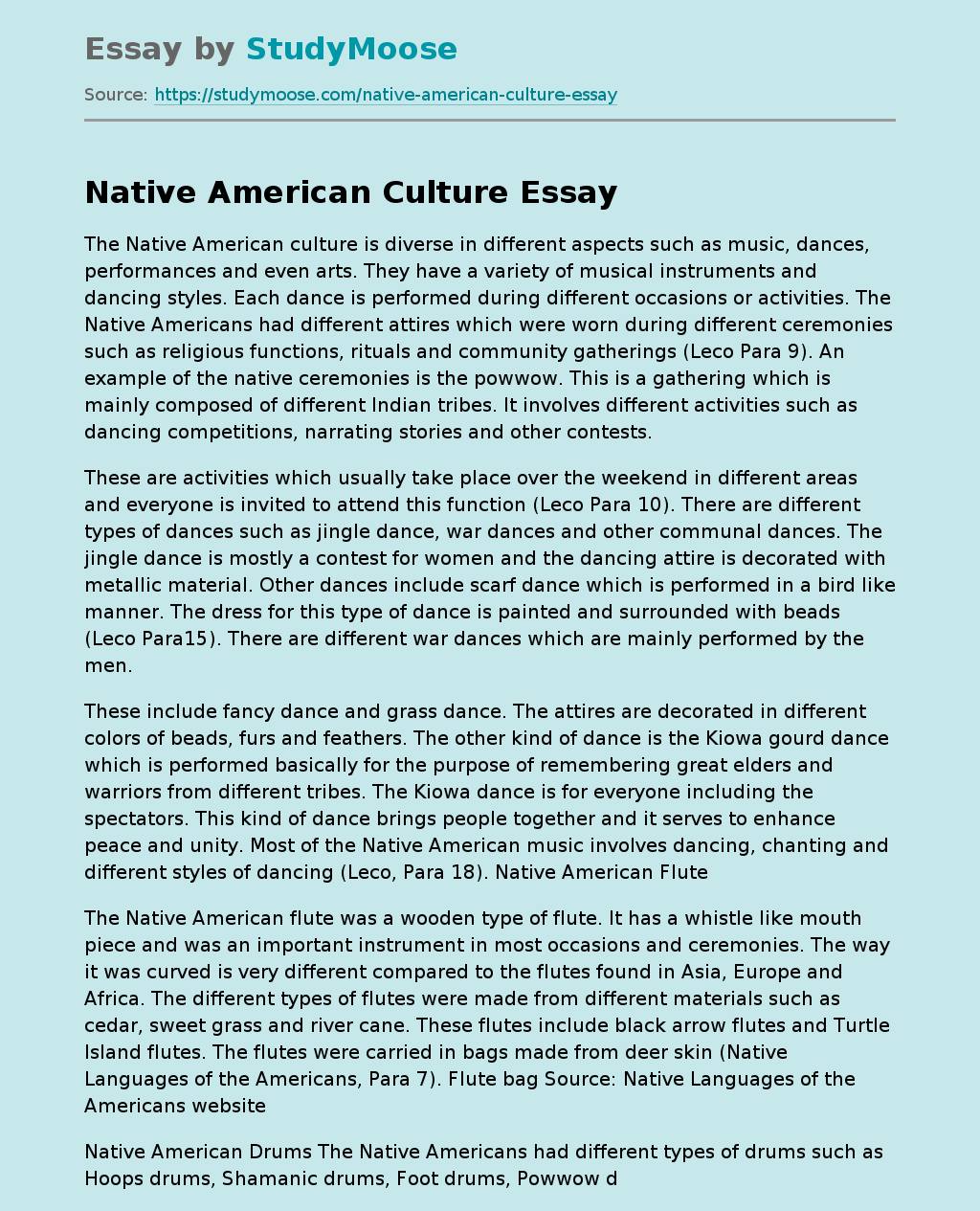