Gun violence has become an uninviting reality for the United States, the gun violence crisis is not uniform rather the rates of gun violence are widely diverse from state to state as does the character of the violence involving weapons. Gun violence takes a big toll on America entirely, claiming thousands of lives yearly. No other country has close to half of the number of gun deaths as America, making the United States insuperable to the numbers of firearms flowing and circulating within our borders (Giffords Law Center, 2019).

Don't use plagiarized sources. Get your custom essay on
“ National Security Emergency of Gun Violence in America ”
Get custom paper
NEW! smart matching with writer

With weak gun laws and unrestricted access to firearms making it easy for Americans to obtain a gun or even multiples guns and high-capacity magazines that can potentially endanger or take their lives or the life of others.

There has been a direct tied to weak gun laws leading to higher rates of gun violence as more guns equal more lethal crimes. As the numbers of ownerships in firearms that are positively associated with a drastic increase in homicide and suicide, handguns and military-grade weapons are easily accessible making it more likely to be used in a criminal act.

Over 1.2 million Americans have been shot within the past decade, over millions have had a personal encounter with gun violence, and hundreds of millions already or will eventually know at least one person who has been a victim of gun violence in their life as the horrific gun violence is on the rise in America (History of Gun Control, 2020).

Gun violence has different names, which can be identified as serious injuries, suicides, homicides, unintentional deaths, and law enforcement killings. Close to 100 thousand Americans are wounded each year and/or often end with life-altering consequences due to any degree of gun violence. Of the 36,383 Americans killed with guns each year, 61% are gun suicides, 35% are gun homicides, 1.4% are law enforcement shootings, and 1.3% are unintentional shootings. As every state has its unique variation of gun violence while efforts to enact safer and stricter gun laws have yet to succeed at the federal level, while stricter action to try and save lives from gun control shows record-breaking numbers (Violence Police Center, 2017-2019). As a result of wanting to change gun laws, gun violence rates differ from state to state. In the United States gun-related deaths, on average more than 35 percent are gun homicides, the gun homicide rate within high-income communities is 25 times higher. Nationally, out of the 100 thousand United States residents about 12 people are killed with guns. Hawaii has the strongest gun laws leading to having the lowest gun death rates in the country, with only two gun-related deaths for every 100 thousand. Alaska followed by Louisiana, Mississippi, and Alabama ranking the highest gun death rate among states correlating with their being the weakest state with gun laws as nearly 25 people are killed with firearms for every 100 thousand (Allen, 2019). The majority of the states’ gun homicides disproportionately affect communities of color, while African-Americans account for over 74% of gun homicides victims within Michigan and New Jersey alone. The Hispanic community accounts for a population of 47% in New Mexico alone but accounts for 60% of the gun violence victims. Gun-related homicides are frequent between intimate partners, a 2007 through 2016 study by the FBI Supplemental Homicide Reports that more than 5,250 women were murder with a gun by their intimate partner (Vargas, 2019).

For America gun violence has become a national security emergency as over the past two decades hundreds of thousands have been killed by guns, estimates put the number of deaths compared to the total of U.S. military deaths since the start of World War 1. Many of the recent mass shootings have been powered by violent, racist, hate and/ or white supremacist backstories. The shooting of El Paso happened after the posting of a manifesto that surrounded the perimeters of a “Hispanic invasion of Texas” that allegedly America should be divided into territories defined by race. According to data from the Gun Violence Archive tracked every mass shooting in the country that by the end of 2019 out o the 417 mass shootings, thirty-one of those shootings were mass murderers (Gun Violence Archives, 2020). In the end, 2019 has the highest number of mass shooting of any other since 2014, surpassing the prior record of 382 mass shootings during 2016. Gun violence has financial, emotional, and legal consequences uniquely for each community affected by this national threat. Generally, assault weapons are high-powered and semiautomatic firearms designed to fire rounds at a high velocity and capacity especially when combined with high-capacity magazines being able to fire even more devastating numbers of rounds in seconds. Mass shootings with assault weapons and high-capacity magazines resulted in more deaths and injuries between 2009 and 2018 with the deadliest mass shootings with assault weapons involving Las Vegas, Orlando, Newton, Sutherland Springs, Parkland, and El Paso. Military-grade weapons with high capacity magazines were disproportionately used in public mass shootings (Everytown, 2019).

Gun-related suicides account for 61% of all gun deaths from 2008 through 2017 creating a rate of 6.61% gun suicides deaths per every 100 thousand people, making it the largest category of all gun deaths in the United States. While Montana, Alaska, and Wyoming presented a higher rate than 15 firearms suicides for every hundred thousand. Firearm-related suicide attempts are more common in states with less strict gun laws whereas the suicide attempted injuries are prone to be associated with higher mortality rates. While firearms-related suicides correlated with over 2/3 of gun-related violence within the United States and guns law and policies remain under revision. The U.S. registers more gun homicides and suicides than 30 other countries, as of 2013 about 41,149 people committed suicide with 21,175 using a gun with at least three times more men and women with children suffer gunshot wounds every year (Igarapé Institute, 2017).

Unintentional shootings and nonlethal gun violence are another type of fatal gun violence that makes headlines is unintentional shootings, which sadly often involve children taking approximately 2% of gun deaths from 2008 through 2017 that during those years an unintentional shooting leading to death occurred every 16 hours accountings for 5,327 lives. An analysis by Brady United to Prevent Gun Violence found that more than 200 people survive gunshot accidents and wounds every day ultimately leading to a lifetime of health complications showing that one in every 4 victims of the fatal unintentional shootings happened among the younger generations especially those under 21 years old (Alban et al, 2019). With lethal gun violence is partially the problem showing that shooting have a devastating impact on communities even when no one is killed, guns are often used in violent crimes where more than 1.5 million aggravated assaults involved a firearm varying significantly across states (Violence Police Center, 2017-2019).

According to the United States Constitution: Second Amendment the Supreme Court defined the amendment is for the protection of individual rights to possess firearms that have no correlation with service in or for the military and to respect and identify lawful purposes while using firearms, such as self-defense within the home (Cornell Law, 2019). Generally, the current well-known gun control debate within the United States has had an exponential grown after major mass shootings, there have been at least 126 mass shootings between early 2000 and July of 2014. Often advocates want more laws for gun control to try to prevent mass shootings by establishing stricter gun laws, background checks, and limitations with those suffering mental illness from buying guns or even making it difficult to obtain a firearm. However, opponents of gun laws accuse those advocating for more gun control of using the tragedies to support their case while it’s lost cause as the argument states that more gun laws would not have prevented or will prevent shootings because you can’t prevent the actions of anyone whether they have firearms or not (History of Gun Control, 2020). In 2018, lobbyist’s gun rights spend close to $12.5 million in order to state their case about gun rights in Washington, and due to such a powerful campaign, they maintained the most as a powerful group. The year that Newtown, Connecticut suffered from a mass shooting at Sandy Hook Elementary School, Gun Control groups spent only about $2 million on lobbying in 2013. Gun Rights groups spend $10,783,360 to keep their dominance on federal lobbying and make their gun laws argument more supported while only $2,330,000 were spent by Gun Control groups. Gun violence isn’t always a senseless act as some mass shootings have been, rather it is somehow connected to some kind of backstory such as hate crimes or trying to send a message across (Gun Rights v. Gun Control). Often gun-related violence is connected to some form of hate crimes, radicalization and white supremacy and nationalism are quickly rising in the United States as many of the recent mass shootings have been fueled by racist rhetoric influenced violence.

United States leaders are in a constant fight with how to address gun violence crises, considering several policies and solutions that would have a significant impact on reducing gun-related deaths, injuries, and crimes within the United States. With citizens being accustomed to gun violence to the point of fear for their kids going to school where they are supposed to learn in a safe environment or fear going to places to spend family for quality time, it shows the level of the national threat of gun violence. Most governments have proposed checks and balances designed to maximize citizen security and minimize firearm use for Americans. Gun violence is a health crisis that it may seem like an unmanageable issue for the United States leaders, gun violence is not inevitable and Americans shouldn’t live in fear of being shot. 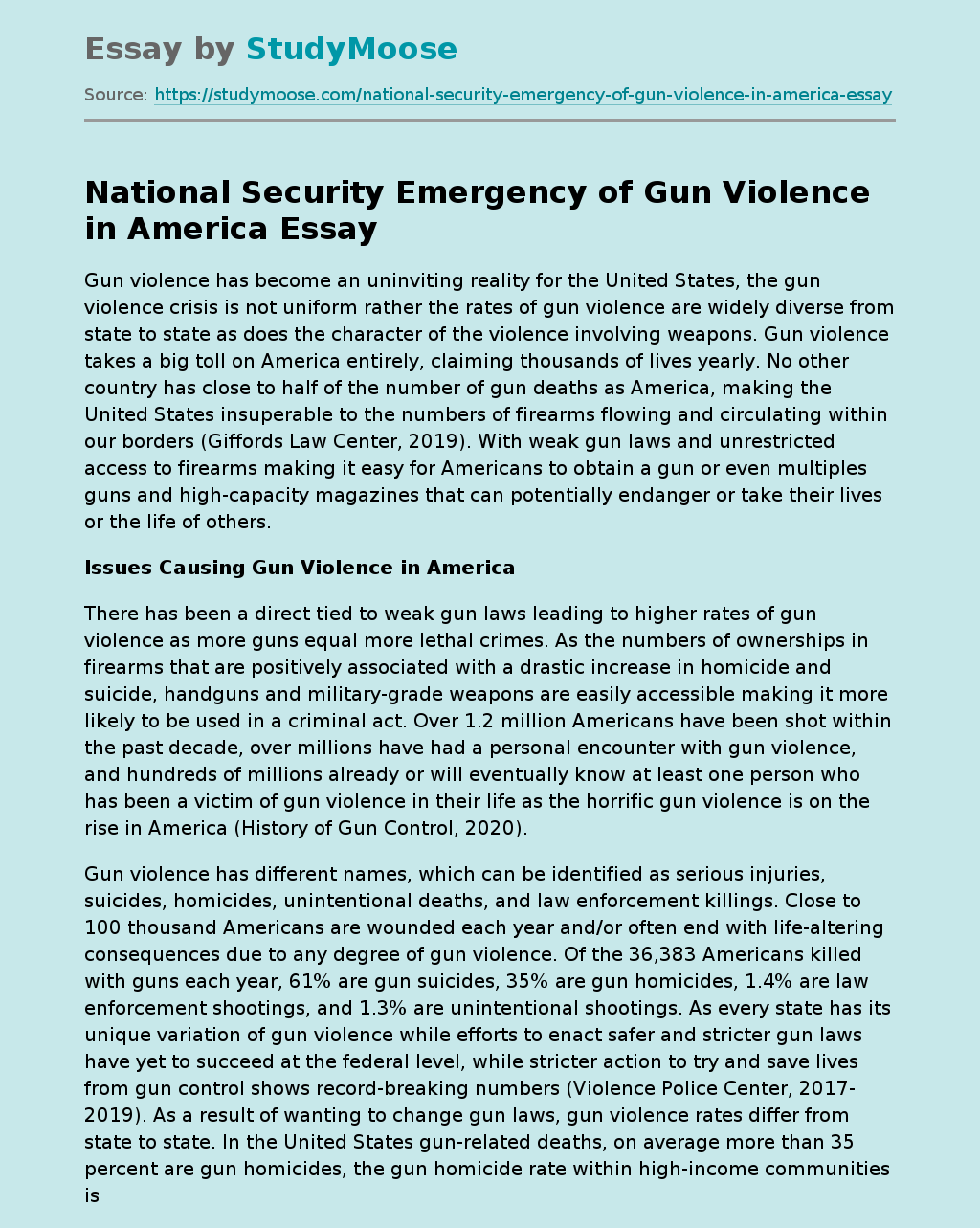