National power is abn important feature of the state system.According to Prof. Morgenthau national power is a psychological relation between those who exercise it and those over whom it is exercised. It gives the former control over certain actions of the latter, through the influence that the former exerts over the latter’s mind.”

Power is possessed by all states howeevrer it amounts varies depending upon some tangible and in tangible elements.all the elements of national power are dependent onn each other through a complex cause and effect relation.

Don't use plagiarized sources. Get your custom essay on
“ National Power ”
Get custom paper
NEW! smart matching with writer

absence or lack of some critical element can make all other elements useless.so national power is a context dependent process.A certain combinion of the elements can make the state highly successful and among the super powers of the world but may not be enough in the different context.

the elemets of national power that can be felt and touched are known as tangible elements such as ;

The importance og geaogrphy as the element of national power cant be ignored because all other element depend upon the geographical location of the state. The importance of geography has been decreased to some extant due to technological development but one cannot ignore its importancePakistan has an amazing geographical location.Pakistan is in the most important region of contemporary world.its the important point for worlds major energy routes and for economic linkages.

pakistan needs to make a good use of its unique location,size,topygraphy and climate.pakistan can serve as an economic hub for the assian nations.It is atourist attraction area aswell.

Population is tangible element of national power. It is assumed that popnt butIn case of developing countries majority of the popu;ation issign of weakness.Large popu;ation resu;ts in unemployment and corrupytion.Pakistan has a large population that is socially active, politically vibrant and well connected through different media/information sources. However, their are hallenges regarding the qaility of basic and highrer eductaion. This element of national power needs to be put to best use by addressing the challenges.

The security and the spatial relation of the country witn the outside world depends upon its lovcation.it is far more im poratant than sixe bcs it detrmine sthe climate and the economic system. Location plays very significant role in national power, for example Bangladesh separated from Pakistan just because of geographical location and weak- end the national power of Pakistan.

It is an important tangible element of national power. Territory is an important element that determinn es the power of a state. The territorial characteristics such as boundaries, climate. strategic location, nature of land and waterways plays very important role in the enhancement of national power. For example, a mountainous country is difficult to be overcome by enemy while plain one easy to be captured.

Natural resources may be defined as, “Gifts of nature of established utility.” They would include, for example waterfall, fertility of soil, oil, iron, copper, gas and coal etc. Natural resources plays very significant role in national power. For example, Kuwait is very small state but due to rich oil resources it plays very vital role in international politics.

Natural resources are the gifts of God and a raw material are the labour of the individual. However, the natural resources do not by themselves create power. They have to be exploited with the help of capital, technical know-how and skilled labours. For example, though Brazil had rich iron deposits they did not contribute to her national power till they were exploited with the technical assistance received from USA.

Technology is often defined as applied science. Technological change reflects the actual adoption of new methods and products; it is the triumph of the new over the old in the test of the market and the budget. Moreover, it involves a complex, social process including many elements science, education, research and development under private and public auspices, management, technology, production facilities, workers and labour organization.” It has already ushered in the age of computers, automation, and atomic and space technology.

Technology is also one of the most important elements of national power. For example, USA is the global master due to advancement in technology. In recent years, technology has come to exercise profound influence on the power base of a state as well as the course of international relations. Technology at least in three sphere i.e. industrial, communication and military, has greatly influenced the power of the state.

The mere possession of abundance of material and human resources and formation of a good foreign policy would prove useless if the political structure or the government cannot play its role effectively. The government is required to choose the objectives and methods of its foreign policy in the light of the power available to support them with a maximum success.

Military advancement is the most apparent and tangible factor capable of supporting the foreign policy and promoting national. interest. Military advancement plays very important role in international politics. For example, during first phase of the World War I Germany gained superiority over British because of the use of submarines.

The national power of national state is greatly determined by the quality of diplomacy pursued by its diplomats. According to Morgenthau “The quality of diplomacy of a state gives direction and weight to other elements of power.” Diplomacy is an entire method of resolving international conflicts. Diplomacy can serve the interest of a state by protecting its people abroad, by searching out new opportunities for trade, by decumulating information about geography resources, techniques, cultural and military establishment.

So, for we have been considering tangible and material factors of national power. Now we must turn to factors that are no less important, although they are more difficult to isolate and define. These are the elements of ideology, moral. and leadership.

In the modern period the ideologies of socialism, communism, democracy, liberalism and nationalism have an international appeal. Ideology is the most important element of national power because ideology creates unity among nations and builds a sense of common interest to people. For example, the Soviet and Chinese national power is associated with the ideology of communism. An ideology is a brunch of ideas about life, society or government. USSR got the status of super power through the ideology of communism and Pakistan came into being due to Islamic ideology.

Leadership is interrelated with the other elements of national power because it is one of the measures of the extant to that those elements are utilized. According to Palmer and Perline: “Without leadership people cannot even constitute a state.”

A nation state cannot emerge without able leadership. Without it there can be no well-developed or integrated technology and without it morale is totally useless, if indeed it can exist at all. Leadership plays very important role in stimulating or discouraging governmental activities. People like Lenin, Stalin and Churchill changed the fate of their people and countries. So, we can say that leadership plays very important role in the enhancement of national power.

Some writers list national character as one of the elements of national power as does Professor Hans J. Morgenthau in his politics among nations. It may be regarded as one of the major determinants of national morale although of course, it is broader then morale. But where it is more then the basis of morale, it may help to explain some other elements.

National character may be thought of as climate, morale as weather. Morgenthau also says that, “National character is the degree of determination with that a nation support the home and foreign policy of its government in time of peace and war.” 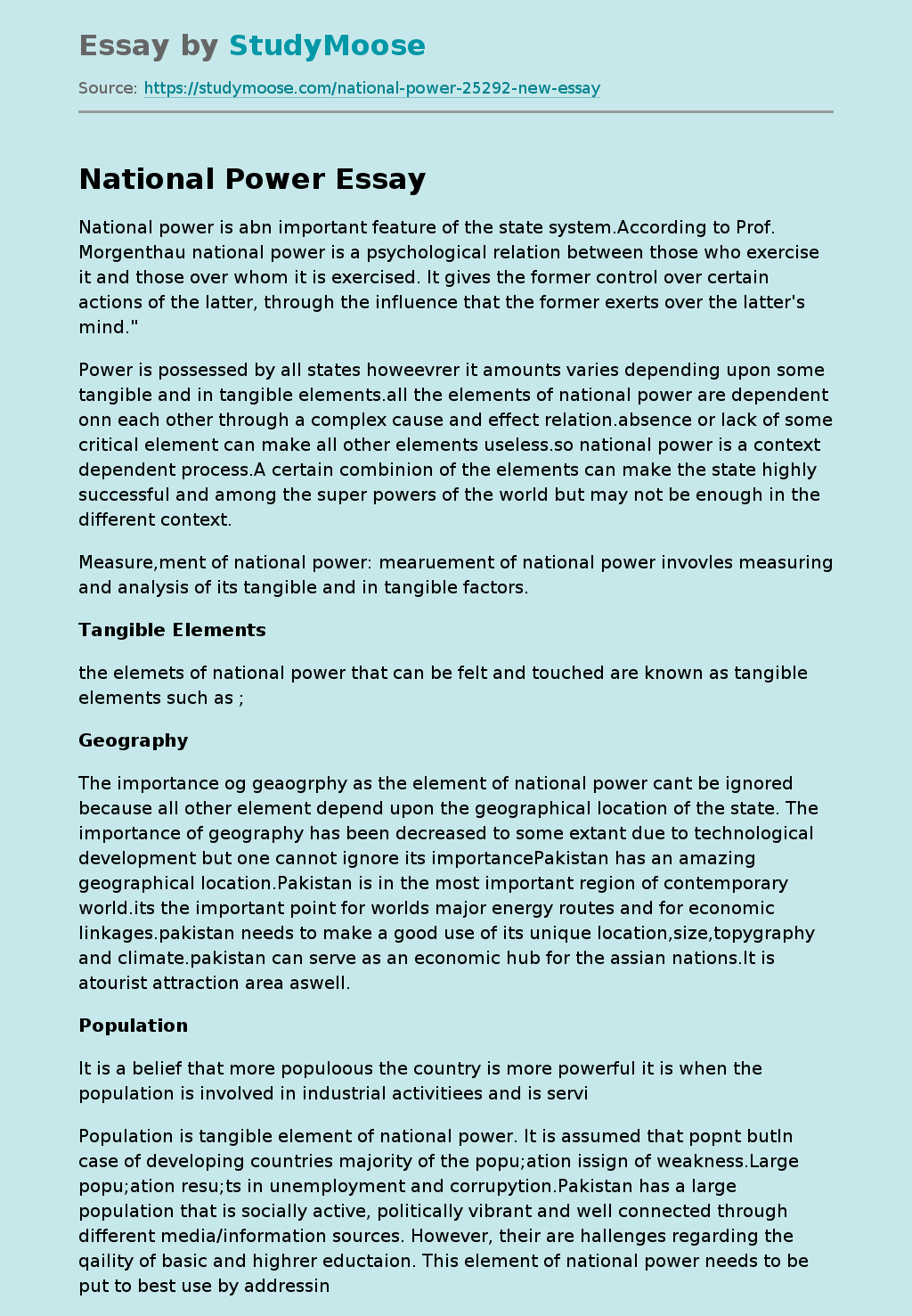