Turn in your highest-quality paper
Get a qualified writer to help you with
“ National Income Statistics and Standard of Living ”
Get high-quality paper
NEW! AI matching with writer

China has a higher gross national income than the UK at $2,263.8 million; however it only has a per capita income of $1,740, which is only higher than Indonesia, Pakistan, Kenya and Tanzania.

This suggests that it has a poor standard of living, despite having a large national income. This may be a result of a distorted distribution of income, with the wealthier part of the population having a considerably higher income than the rest of the population.

The national income is also higher than New Zealand’s figure as well as the figure for the Czech Republic. However, New Zealand’s per capita income is 20 times higher than Indonesia’s, meaning the standard of living is higher there, than it is in Indonesia. Colombia has a GNI of $104.5 million, and a Per capita income of $2,290. This means the standard of living is higher in Colombia, than it is in Indonesia, even though Indonesia has a national income twice the size of Colombia’s figure. This may be due to the fact that Indonesia is almost 5 times the size of Colombia, and therefore has a larger percentage of people living in poverty.

Although we can compare different countries easily, there are many limitations in using national income (NI) statistics to compare the standard of living between countries. One limitation can be caused due to there being no common unit of measurement, as some countries use their domestic currency to measure the national income whereas others use US dollars to measure national income. Therefore there is no standard unit, which leads to frequent inconsistencies. Another problem with using national income statistics is that there are many inaccuracies due to the difficulties in the measurement e.g. non-marketed goods such as the service of a housewife are not counted in the NI calculation.

The goods and services produced and sold in an illegal manner in the black economy such as drugs and gambling are also not counted in the NI calculation. Also, Price changes within specific markets also cause inaccuracies e.g. Due to price rises, the value of national income for a particular year tends to increase even when the production is decreasing. A further criticism is that the NI statistics do not take into account the distribution of wealth, as a result, the standards of living within a country may be subjective, e.g. countries with a very small, very rich upper class and a very large, very poor lower class may have a high mean level of income, even though the majority of people have a “low standard of living”. Furthermore, an increase in national income may lead to an increase in the amount of goods and services available for consumption, which will increase the standard of living; however this is not necessarily true, as national income does not measure non material measurements, such as life expectancy and pollution levels. Therefore, problems are created when NI statistics are used to compare the standard of living.

Norway’s life expectancy at birth in in 2006 was 82.9 years; by comparison, the life expectancy at birth in the USA was only 77.7 years. Another advantage of using HDI, as opposed to GDP, is that due to it only being 1 value, it allows statistical analysis to be completed and overall a practical measure for databases, and models. Although it is a more accurate representation of the standard of living than GDP, the HDI is a rather crude measure of standard of living, as it does not include many aspects of development in its index, such as war, political oppression and emotional change, just to name a few. As a result, it can never be a fully accurate representation of the Standard of living in a particular country. 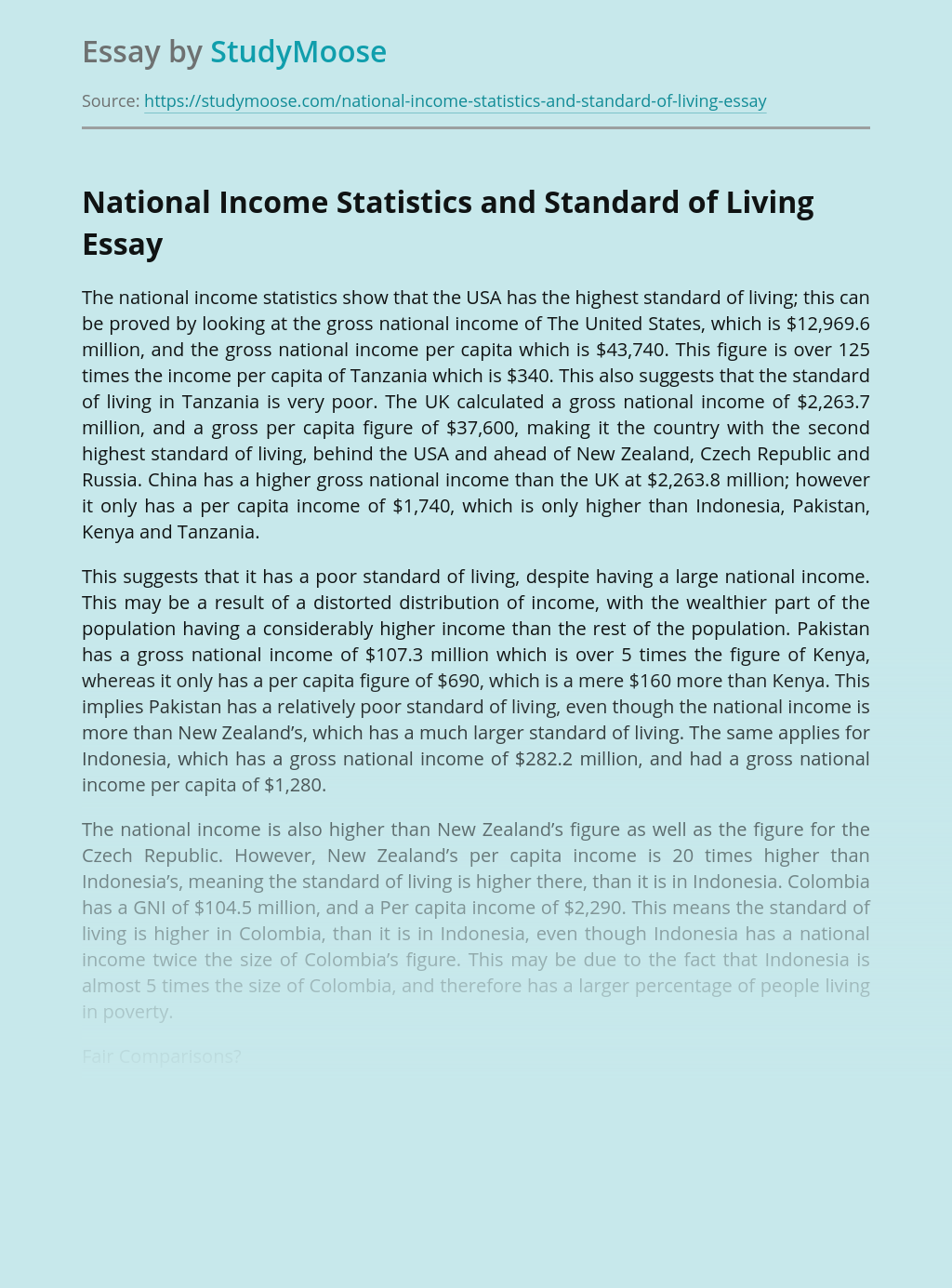 Turn in your highest-quality paper
Get a qualified writer to help you with
“ National Income Statistics and Standard of Living ”
Get high-quality paper
Helping students since 2015
Stay Safe, Stay Original