GSP is indeed a labor of love, sacrifices and dedication of the combined effort of scouters, adult leaders, school administration and the council for the purpose of the following:

1. Acquiring new learning experience with the opportunity to develop sel-stem, confidence, creativity and life skills,
2. Discover and enhance their full potential and learn to relate with other girls in camp,
3. Acquire knowledge and skills on first aid and emergency preparedness with the opportunity to respond real situation that require them to use basic human survival skills,
4. Stimulate real enjoyment and appreciation of the out-of-doors through varied and interesting activities offered during the encampment.

Southern Leyte Council registered 16 senior girl scout and 5 adult leaders headed by one council executive Marlita D. Corollo. The campers must be physical fit; must have earned at least one badge each under the challenge of environment, preparedness, Arts, eco-self-sufficiency, Heritage and Citizenship; and she must attended a troop/patrol camp/ provincial camp prior to this encampment.

The encampment covers six (6) days of staying under the forest, sleeping on the tent with series of challenges and activities everyday.

ARRIVAL….
MORNING:
The central staff welcomes the delegates and gives directions on how the campers could reach their sub-camps. Each sub-camps director guides and directs the campers under her jurisdiction to reach our respective area.

Markers are used to designate the area for each delegation. Southern Leyte Council belongs to sub-camp Milagros together with Ilo-ilo, Negros Oriental and Northern Samar. Each council was responsible for making our area comfortable. We were put up tents, gadgets as part of the layout. We put some caption at the entrance of our area to identify the council we belong. Everyone were helping each other and do the task well in building our tent and making our area accommodating and comfortable.

The head of the Southern Leyte Council were registering the girls with the secretariat. After registration the campers proceed to our area for the lunch.

AFTERNOON:
Medical re-check shall be done on the first day afternoon. The adult leaders were lead the campers to the infirmary area and present their Health Examination Forms to the Camp Physician upon examination to make sure that the campers were physically fit for the series of challenges and activities.

EVENING:
The orientation was given by the central staff. The details about the program of activities, food services, accommodation, management and other services as well as the camp mechanics were thoroughly explained by the staff in that orientation. The campers were feel free to ask questions if they were need further clarification on certain matters.

At 7:30 AM the campers were in the grounds for the rehearsal of the opening ceremony, because they were forming 50 which represent 50 year anniversary of Camp Marina. At 9:00 AM the campers were in the actual area wearing their type A uniform for the Opening Ceremony. The central staff was sitting on the stage together with the guest speaker while the scouters and the adult leaders were on the ground forming 50. Each council was required to introduce their troop in the form of yell. The ceremony was ended at 12:00 noon.

AFTERNOON:
The first activity was all about Emergency Preparedness. It was held at the administration building. They were teach us on what to do during emergency, what are the things to prepare before the typhoon and other calamities come. After the discussion, we were doing the drill.

After taking our supper we proceed immediately on the covered court for the Council Extravaganza. Each council are required to present one presentation. For the Southern Leyte Council, a modern dance number were presented headed by the Dulfo twin sister.

MORNING:
At exactly eight o’clock we were already at the covered court because the girls were very excited to do the activity no.2 which was all about ballroom dancing. The first move that the dance instructor taught us was the chacha, next in line was boggie, followed by zumba. That time I think, we were burn 1000 calories, fats and lipids because of so many sweats comes out from our body and so much fun.

Activity no. 3 was the handicraft. At the back of the National Equipment Services (NES) building is a small auditorium, where the handicraft activity was held. Each girl were given a task to make any accessories using the given accessories paraphernalia. Most of our girls make bracelets and some of them make necklace.

The most awaited part of the camping is the campfire. Everybody was gathered in front of the covered court to witness the campfire. Every sub-camp were required tp present a dance number which represent the culture and tradition of the place where they belong. The sub-camp 1 present a sinulog dance festival, the sub-camp 2 were present an ati-atihan festival and the sub camp 3 where we belong presents dinagyang festival. The girls from So. Leyte council wearing a type B uniform with malong, barefooted joined the dinagyang festival together with Ilo-ilo and the rest of the members of the sub-camp. The fire was lighted by the Regional Executive Director Mrs. Aida Saromines together with Mrs Ruth T. Jarantilla the Regional Vice Chairperson.

Right after the breakfast of the girls they were proceeds to the top of the hill to perform the activity no. 4 which was all about mural painting. Southern Leyte was represented by Anna Henli and our very own Daphne Doris Jacka to do the mural painting while the other girls were the assistants and observer of their painting. The whole morning was not enough to do the task. The two were going down to take their lunch.

After eating, the two were go back to work immediately, but trouble were happen because one of the girl from Maasin City change the work of Anna and Daphne totally while they were taking their lunch in the tent, this made the whole council shocked. Tears was falling down on the face of the two because many people were admired the work of Anna and Daphne but suddenly it was change by Inna. Until such time that the allotted time for mural painting was up, so they do not have a chance to change it back. Sadness…..sadness….sadness…. occur in the camp.

At 5:00 o’clock we were going again to the top to attend the Holy mass which was an anticipated Sunday mass.

Inter-camp Visit was the event for that night but the girls are seems not interested anymore due to the trouble that had happen in that afternoon. The adult leaders were encourages the girls to nevermind that trouble because that was part of growing up and still do the task and perform it well.

MORNING:
As early as five thirty our girls were ready for the scouts own. It is a solemn ceremony for the Girl Scout. Right after the ceremony, we were took our breakfast immediately because we were excited for the tour which was the last activity of the encampment. Before seven o’clock we were on the top of the hill waiting for the bus to take us a ride for the tour.

We were passing by the Cebu Capitol and Pari-an. The first place that we visit was the Fort San Pedro, commonly known as “Plaza Independencia” Then the next stop was Sto. Niño de Cebu, then going to the South to visit the Chapel of Pedro Calungsod, and the last was the roaming around the Ayala Center of Cebu.

While touring ourselves, everybody were so much fun, enjoyed and busy on taking pictures………. Click……click……click…..

Back to the camp at almost 1 o’clock, and take our lunch from Jollibee. Chicken joy…… hhhmmm… yummy…….
At two o’clock the closing ceremony was done……. Then home sweet home….

Joining the Visayas Regional Junior, Senior and Cadet Encampment was so fantastic and awesome experience which we will never forget forever. Through this memorable experience we were grow towards a responsible girl scout and become a better person and a good leader soon……

It is indeed a labor of love, sacrifice and dedication. 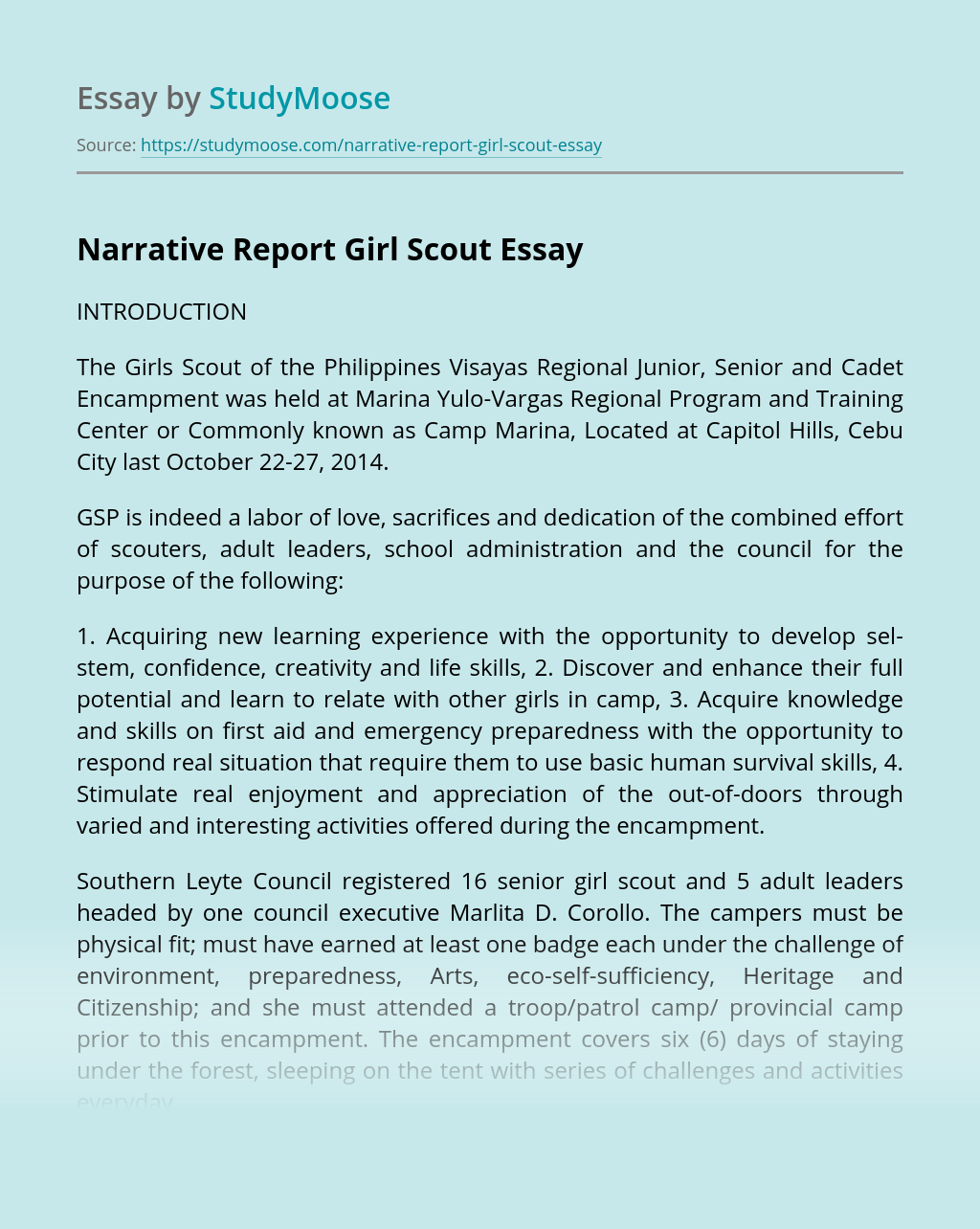