What would society be like if all of its inhabitants were uneducated? The lack of education is the reason why they’re forced into slavery by the pigs. Through this lack of education they are very weak and often believe everything that they are told because they have not learned otherwise. The pig’s superior intelligence and prior education allows them to quickly bring the other animals under their supreme rule. As a result of the animal’s inferior knowledge, they become unable to stand up for what is right and fail to realize how much power Napoleon is gaining over them.

Don't use plagiarized sources. Get your custom essay on
“ Napoleon and Animal Farm ”
Get custom paper
NEW! smart matching with writer

When they do realize, however, it is too late.

To begin, the pigs teach themselves how to read and write from a book but destroy it before the other animals have the same chance. Most of the animals never get to learn more than a few letters of the alphabet. Because of this, everyone agrees and believes everything the pigs say because they’re the educated ones.

This brings out the idea of conformity since none of the animals have the power and intelligence regulated to challenge Napoleon’s power, they listen to him all the time. As far as they’re aware of the situation, the pigs are still their “comrades” and are trying to help them.

Having considered this, it is also reasonable to look at how the more rational animals such as Benjamin and Clover did not rise up even after ending so much problems. Considering that they too, like all of the animals had a responsibility as a citizen of Animal Farm to stop anybody from taking their freedom away from them.

Benjamin can read like the pigs and has the same level, if not a higher level of intelligence than them. Nonetheless, he is cynical and minds his own business. Clover, on the other hand, is not as educated and quick-witted as Benjamin, but she possesses knowledge that she gained over the years and has an idea of what the pigs are up to after witnessing Boxer’s death. She could possibly have lead a rebellion against the pigs, but like every other animal, she is also part of the mass conformity happening in Animal Farm.

An equally significant aspect is the events occurring in history. One must always evaluate the effects of different matters in the world. In history, it can be seen that giving a person or group absolute control over the population’s lives. Then the ruler would most likely become corrupt from this authority. History has also shown every revolution soon becomes pointless and the emphasis on freedom will disappear as the original laws wither away and leaders are replaced by other leaders. The animal rebellion, similar to every other revolution that took place, swiftly became a meaningless dream and the pigs took control.

At last, it can be said that Orwell’s idea of revolution is that they are absurd and illogical and the results will most often be worse than it originally used to be. Lack of education in society will let the educated rule over the uneducated. Also causing a problem in which no one could make a clear and distinct decision for themselves about what is right and what is wrong. In the end, old Major’s idea of a free and equal community didn’t play out as it should have and everything that the animals worked for was for nothing. 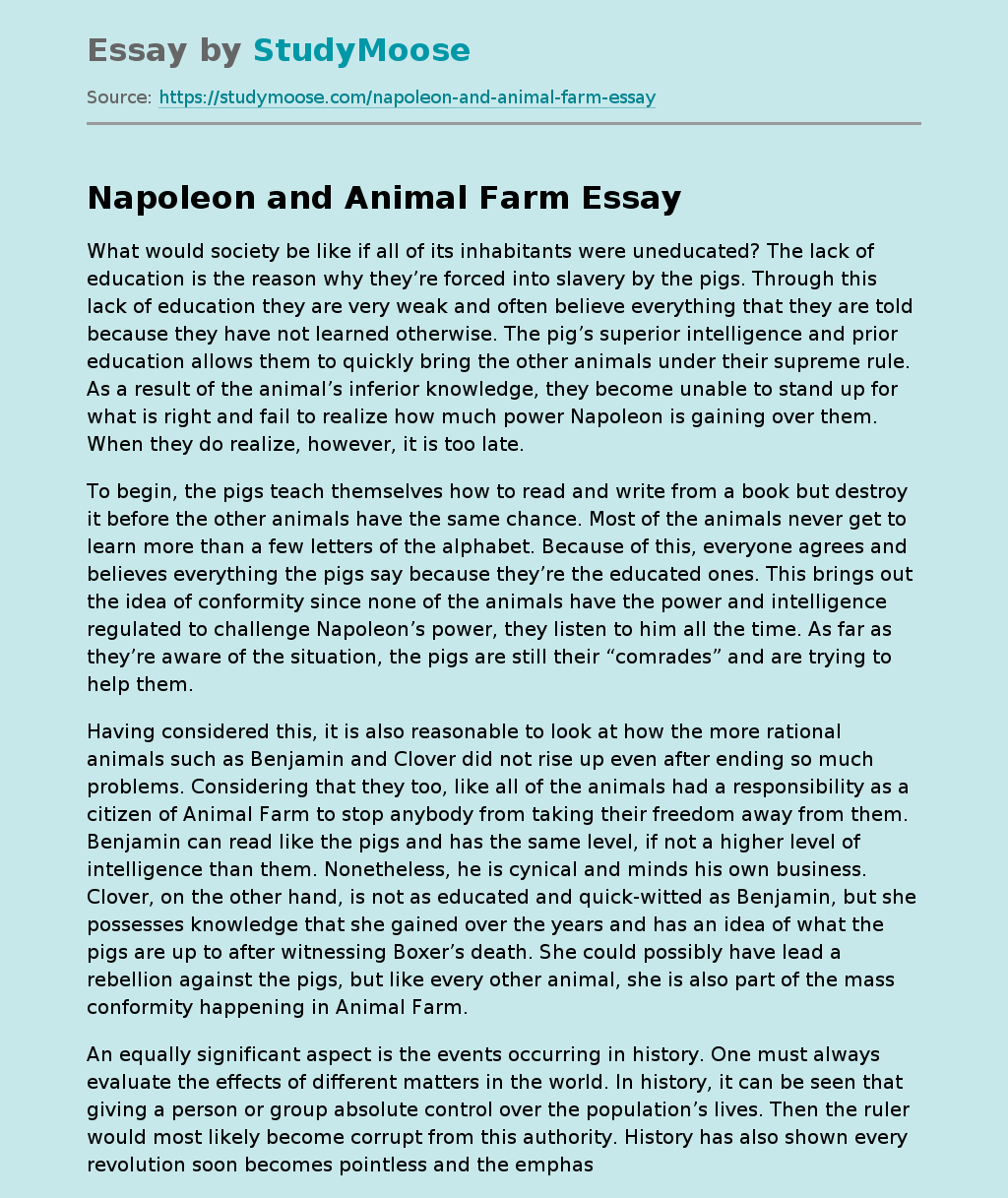