1. What is the ‘naming of parts’ that the title of the poem refers to?

The naming of parts refers to the riﬂe lesson in the poem, with the soldiers being taught about the parts of the riﬂe. 2. The ﬁrst stanza identiﬁes the timeframe of this poem. Explain why ‘yesterday’, ‘today’ and ‘tomorrow’ might be signiﬁcant. This talks about the past, present and future, which is why it is signiﬁcant. 3. Explain the simile that compares Japonica to coral (lines 4-5).

Don't use plagiarized sources. Get your custom essay on
“ Naming of Parts ”
Get custom paper
NEW! smart matching with writer

Japonica is a pink ﬂower that blossoms in bunches on trees in the spring. The poem compares the colour of the japonica to coral, and how it glows and shines. It talks about the beauty of the ﬂowers, and compares it to that of the coral. 4. In which lines is the title line repeated? What is the effect of this repetition?

The effect of the repetition is that it ties the poem together, and it puts emphasis on the title. 5. Who do you think is speaking in this poem and who do you think is being addressed? Give reasons for your answer. I think that the speaker in this poem is a soldier that has just been recruited, and is being taught about how to use his riﬂe. In my opinion, the poem is addressing the soldier himself, or maybe the world, and people in war.

8. The word ‘ﬁnger’ is used in two different contexts in the third stanza. What is the meaning

of each, and what do you think is the effect of using both in close proximity? The ﬁrst mention of the word is a literal context, meaning that they need to use their thumb to release the safety catch, and not their ﬁnger. The second seems to me as if it is a comparison of the instructor and the blossoms of a plant. I think that it is so because the soldier has drifted off, and is looking at ﬂowers while listening to the instructor talk about not using ﬁngers. 9. The fourth stanza begins with the word ‘And’ (line 19). What is the effect of this?

It seems like it is a continuation of another sentence, or something that the instructor has said before. It gives us a way to link the ﬁrst part of all the stanzas together, as if the nature part of the previous stanza was something completely different. 10. In the same stanza, the phrase ‘easing the spring’ is used twice with two different meanings.

What effect is created when these two ideas are considered side by side? The ﬁrst meaning is to ease the spring in a riﬂe, a mechanical and literal reference. In the second mention however, the word spring is capitalized, and is referring to the season. When these two are compared to each other, the ﬁrst seems like a comparison to war and destruction because of the riﬂe’s use to do so, and the second contrasts with references to reproduction and giving life. It makes a contrast between giving and taking life. 11. There is a lot of imagery associated with sexual reproduction. Give some examples of these words and explain how this language might contribute to the theme of the poem. The “easing of the spring,” where Reed writes “rapidly backwards and forwards,” could be associated with sexual reproduction. 12. In contrast, what ideas in the poem evoke the idea of death and destruction?

The instructor’s mechanical and almost cynical explanation of how to use the riﬂe, or how to kill and destruct in the war, evokes this idea very clearly. 13. Comment on the phrase: “..and the point of balance, / Which in our case we have not got…” (lines 27-28). Perhaps this is talking about how the soldier feels that their lives have been thrown out of balance, or how the world is out of balance, engaging in warfare instead of appreciating the beauty of nature around them.

14. Why do you think the poet drew attention to the silence of the almond blossom? (line 29).

I do not see any other reason than him wanting to draw attention to the incredible beauty of nature, and how this contrasts with the destructive warfare going on. 15. In your opinion, what is the main theme or message of this poem and how effectively has the poem communicated it? In my opinion, this poem is about the contrasts between the beauty of nature and war. I think this poem communicates this in a very good way once one has read it a few times and identiﬁed the contrasts and metaphors that are hidden. 16. Lastly, write some comments about how your interpretation of the poem has developed since you ﬁrst encountered it.

Don’t forget to reﬂect on your artistic interpretations last week – how did they help (or hinder) your growing understanding? Since I ﬁrst heard the poem, I have understood more and more of the meaning behind it. At ﬁrst, I only grasped the fact that it talks about a riﬂe lesson, and that it probably had a connection to soldiers and war. I did not comprehend the relationship between war and nature that I interpret as the underlying theme now. I didn’t get very much out of the artistic interpretation last week, other than exploring the nature/war relationship more. The destructive versus growth aspect was also explored, and this helped me grasp the meaning of some of the metaphors. 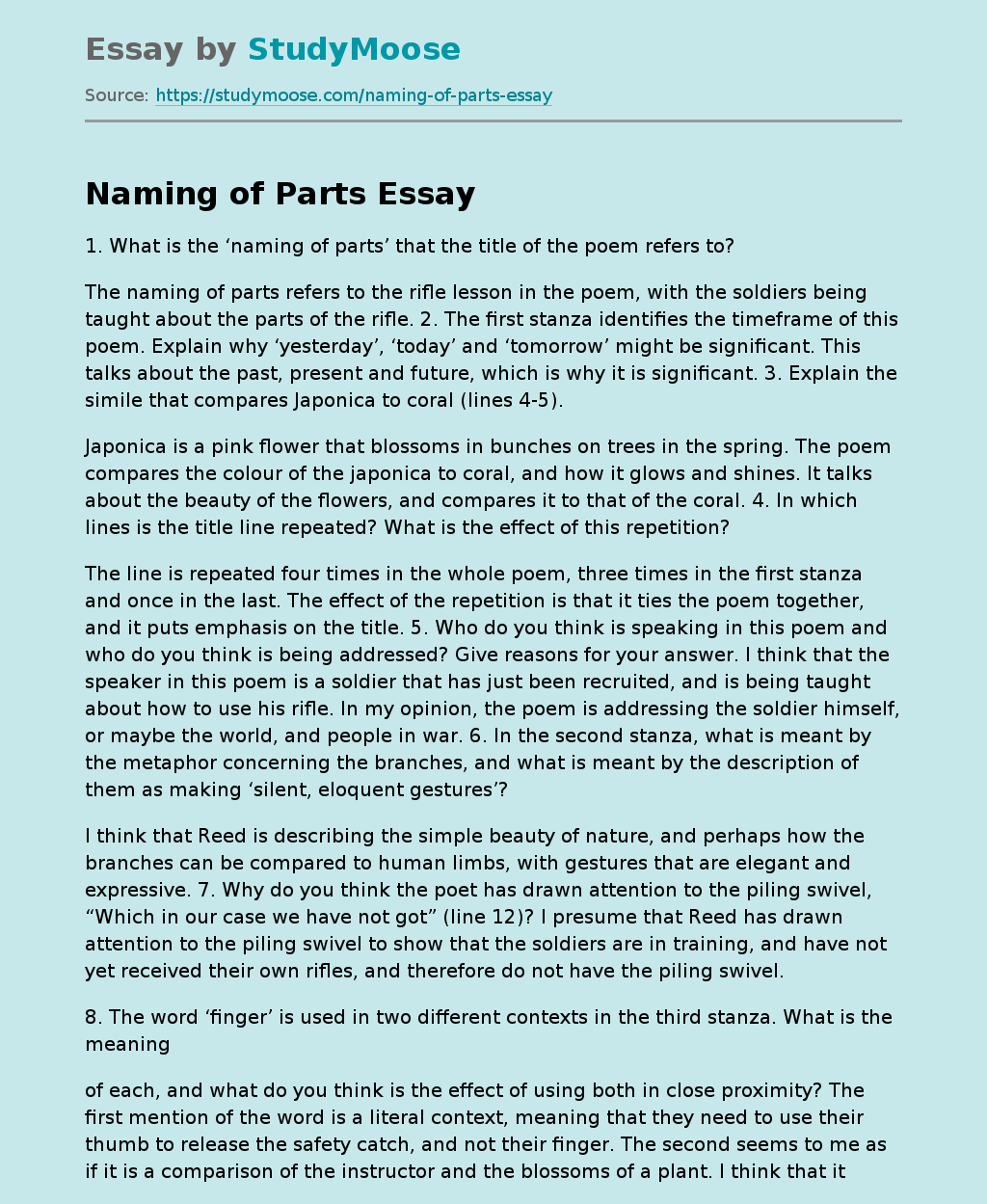