Myths that Hide the American Indian

Nearly everyone in this world is guilty of stereotyping against a certain race, religion, ethnic group, nationality, etc. One of those groups that are stereotyped is the Native Americans. Ever since the Europeans “discovered” the New World, there have myths about the Native Americans that lead to this stereotyping. In the essay, “Myths That Hide the American Indian” by Oliver La Farge, many of those myths are brought up.

Don't use plagiarized sources. Get your custom essay on
“ Myths that Hide the American Indian ”
Get custom paper
NEW! smart matching with writer

One of the many myths that the Europeans created about the Native Americans is that they are bloodthirsty, ruthless savages. Oliver La Farge does a good job in his essay of discounting this myth by giving multiple examples of how most groups of Native Americans were a peaceful group of people that just were not quite as well developed socially, economically, technologically, etc.

La Farge also discounts this part of the myth in his essay. Going back to the point of the Europeans thinking they were superior a superior race when being compared to the Native Americans, that would happen in any situation if the circumstances were similar because it is human nature to believe that if one race able to conquer another race, then they will believe they are superior. This is one of the continuing myths that have hid the Native Americans from white people.

Another one of the myths that plagued the Native Americans is that the early European settlers tended to assume that all or most of the Native Americans had one culture and that they were all at about the same stage of development. This myth could not be further from the truth. “The tribes and nations that occupied North America varied enormously, and their condition was anything but static” (pg. 7). The cultures of the Native Americans were like snowflakes; no two were alike.

Many different types of cultures are described in detail in the essay, proving that the myth is completely wrong. Each tribe of Native Americans had a culture that, while considered backwards and wrong by the Europeans, was unique. This myth helped to hide the Native Americans from white settlers because if the whites got to know the culture of one tribe, they would just assume that all of the other tribes had identical cultures.

Myths that Hide the American Indian. (2017, Jan 24). Retrieved from https://studymoose.com/myths-that-hide-the-american-indian-essay 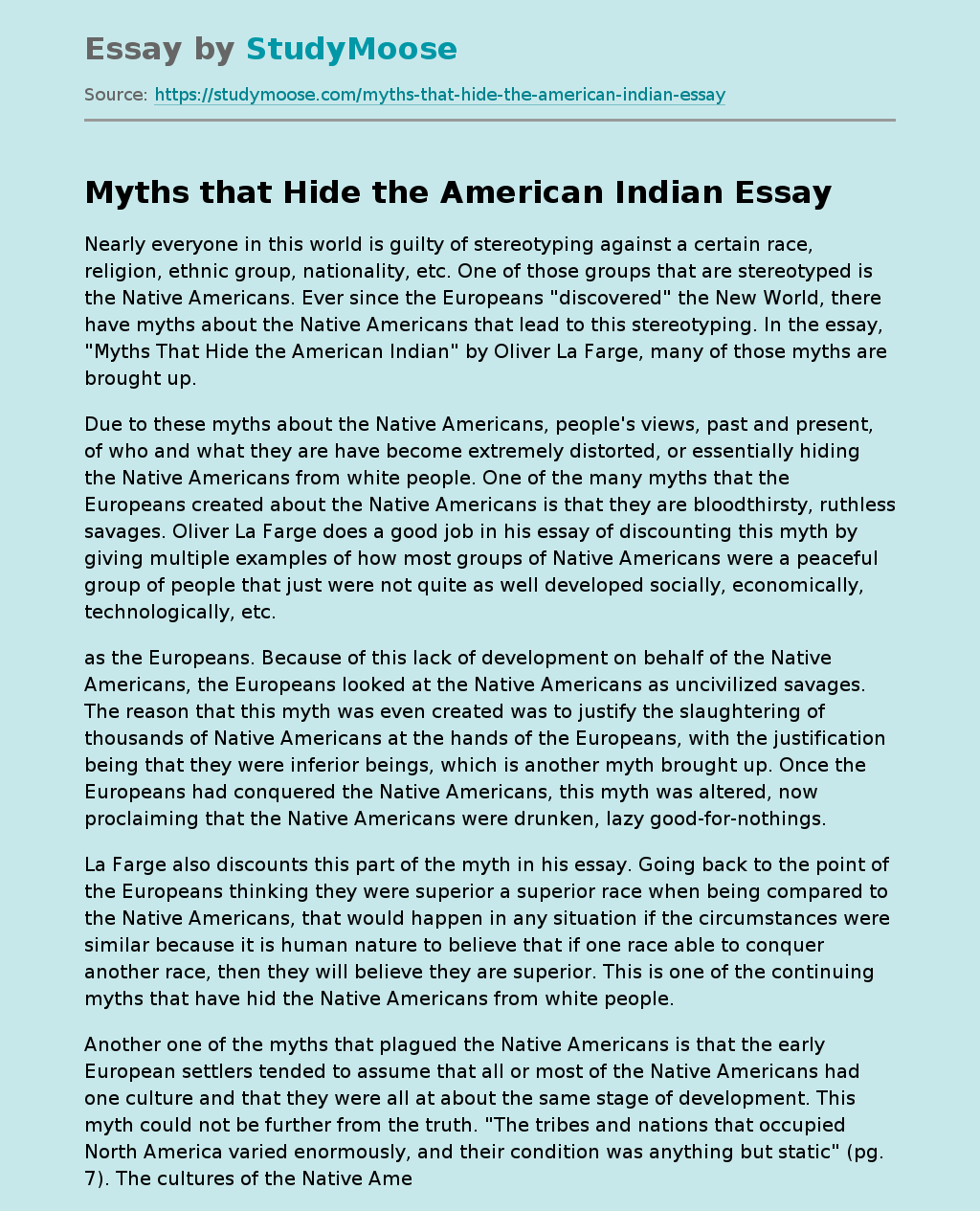