1. Assume the role of Fuad, the accountant. What changes, if any, would you recommend, in the management of the petrol station, to Mat Jon? Why? Be as explicit as possible.

The recommendation regarding to the management of the petrol station can divide into three major part, which is recording management, inventory management, and internal control. Because these problems can be directly or indirectly affect the performance of the business. In order to well managing a business, a skillful person with managerial aptitudes and ethical behavior are required.

Don't use plagiarized sources. Get your custom essay on
“ Mystery of disappearing oil ”
Get custom paper
NEW! smart matching with writer

However, the person who carrying the day-to-day operation of the business, Jamel, does not possessed it.

Inaccurate amount in sales collection
Based on the cases, the Mat Jon found out that the sales collection was greatly different for the beginning of July and ending of the July. The sales figures for first two days were reasonable good, it was around RM32, 000，but it was dropped significantly in the end of the month, which is drop to RM14, 000 in 31st July.

In 1st of July, the daily pump sales of unleaded petrol are RM34, 458.68, however, it already exceed the total sales of the day which amounting to RM 32, 220.40. Since the Mat Jon does not able to seek the explanation from his nephew, i suspect there is high possibility sales was take place, but may be intentionally or unintentionally omitted recording. Recommendation:

I would suggest Mat Jon make a proper reconciliation between the sales recorded, physical balance of unleaded petrol and bank statement in order to found out the missing amount.

Exceeding of the overdraft amount
The petrol station facing the shortage of cash and this is showed on the exceed limit of the bank overdraft. Compare the daily cash sales receive with the amount in the bank statement, it showed that the cash sales that deposit into the bank are lower than the actual sales. The overdraft limit is only RM20, 000, but they already overdraft for RM 21, 019.42. From the sales collection report, most of the sales is deemed from cash, so it is less likely the petrol station will facing the shortage of cash. It may be either have theft of cash or intentionally manipulation by Jamel since the Jamel was felt nervous when Mat Jon questioning him. Recommendation:

Mat Jon should reconcile all the cash received against the sales, and this could be done in daily. In addition, Mat Jon should consider installing a CCTV all around the petrol station in order to prevent theft of cash by unethical staff.

Matching the purchase order (PO), delivery order (DO), and invoices when payment is made. Mat Jon should track back all the supporting documents in order to ensure the payment is made for the petrol purchased. In addition, this is related to the proper segregation of duties. Mat Jon should not give all the right and authority to Jamel.

Increased in cost of sales while the sales are dropping over years Based on the trend analysis report, the cost of sales was increasing over years but the sales were decline significantly. One of the possibilities is that the inflation causes the cost of petrol increase and so leads to the decreasing in profit. But this assumption is less possible in this case. This is because the performance of recent year could not reasonably explain the increased cost. This might due to Jamel reported the cost of petrol at higher price and gain the differences for himself or, he transferred the cost to the customer by raising the price of petrol, and thus loss of customers. Recommendation:

Negotiated with the supplier and propose a hedging agreement to hedge the petrol price to avoid the inflation.

Mat Jon should not fully rely on Jamel as he does not have any direct interest in this business thus there is possibilities that Jamel won’t put much effort on the petro station business. Mat Jon can remain the Jamel’s position just for the sake of avoiding the conflict between them, but he should monitor the petrol station business by himself to avoid any potential loss. Besides, this can also enable him to regularly reviewing the business, provided guidance to Jamel, and can detect the problems as earlier as he can.

Impolite staff
When they receiving the complaint from their regular customer, Supramaniam, the attendant ignore him and alleged that his fuel indicator may be faulty. And when Supramaniam request to talk with the person in charge, but he was informed that the manager was not around. At the meantime, the supervisor of the petrol station, Sudin, however, could not provide the immediate assistance to the customer. So there is end up with increasing the customer dissatisfaction. Recommendation

Provide proper training to the staff. This including provides guidance on how to deal with the customer complaint and solve the question from the customer courtesy. In addition, the person in charge of the petrol station, Jamel, can be assumed not come to work frequently. Therefore, Mat Jon can consider to install a punch card system to track the attendance record of the employees.

Segregation of duties
Most of the problems is arise is due to there is not proper segregation of duties. When there is one person handling too much of responsibilities, the fraud may occur. In addition, it will also reduce the performance of the person who handling too much of responsibilities because of the work overload. In this case, Jamel, as the sole person who managing the petrol station, was handle too much of duties so that he tend to manipulate the amount in order to obtain the personal gain. Recommendation

Mat Jon should have proper segregation of duties between the manager, Jamel and its supervisor, Sudin to enhance the performance of the petrol station.

Jamel as a station managers, he should responsible in term of the inventory, pricing, recording, and also customer services. Hence, Jamel should responsible: Daily operations at gas stations and fuel-selling convenience stores. To ensure that sufficient amounts of fuel are available,

Sudin as a station supervisor, he should handle the following responsibilities: Supervise and co-ordinate sales staff and cashiers to avoid the theft of cash Assign sales workers to duties
Authorize payments by cheque
Resolve customer complaints and supply shortages
Maintain specified inventory and report to the station manager Prepare reports on sales collection 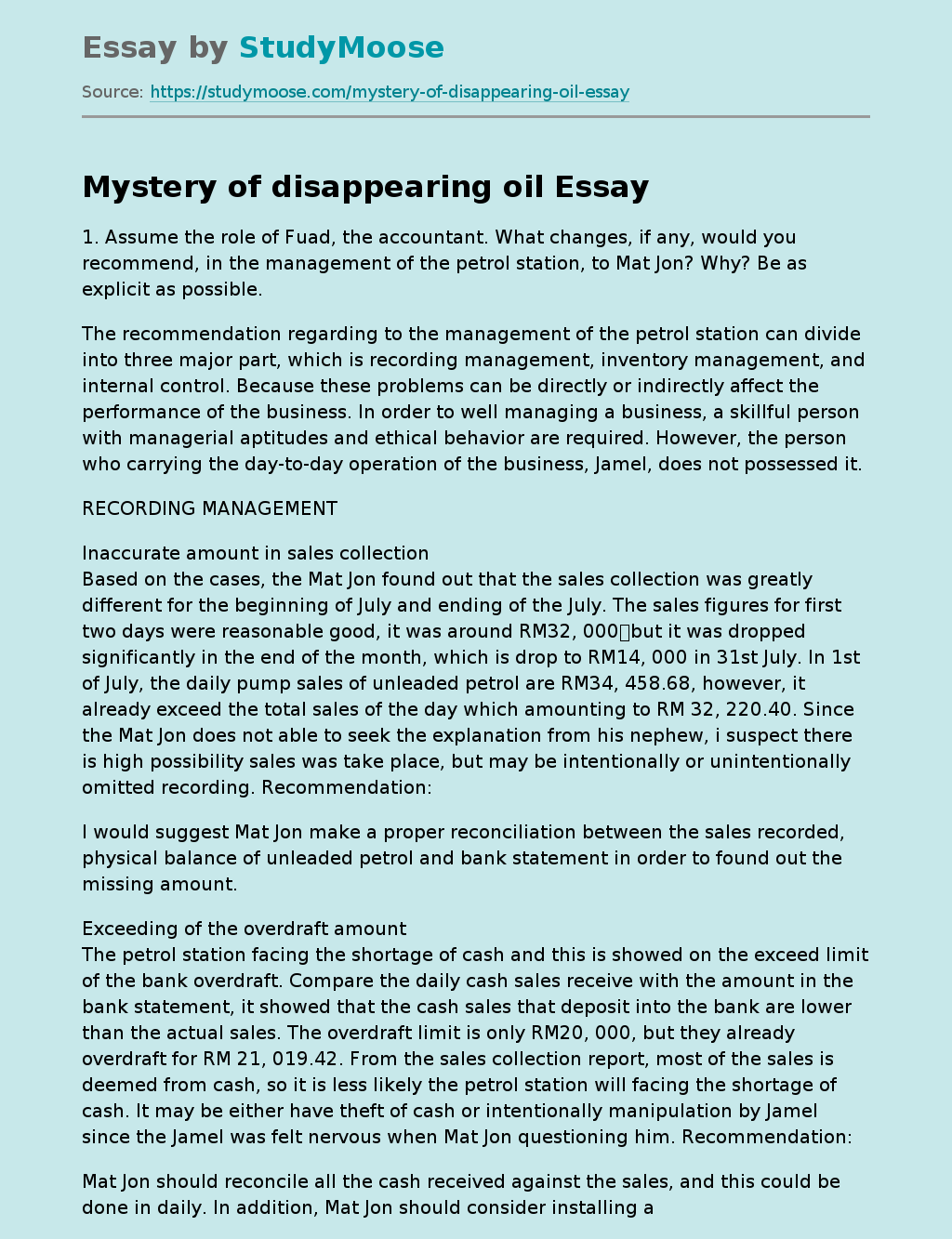