Have you ever wondered what The Bermuda Triangle is about and why it is a great mystery? Then my speech on the Bermuda triangle will help you understand more about this strange thing. The Bermuda triangle is a strange and mysterious region in the south West Atlantic ocean where people, ships, boats and air craft flying over it have been sucked in to its stormy waters or disappeared. The triangle is located in the islands of Bermuda, Miami, Florida and Puerto Rico and it is Also known as the devil’s triangle and covering an area of about 500000 miles.

Don't use plagiarized sources. Get your custom essay on
“ Mystery of Bermuda Triangle ”
Get custom paper
NEW! smart matching with writer

The need to undertake findings on the Bermuda triangle arose from what many journalists and other writers described the area to have experienced an extraordinarily high number of disappearances of ships, airplanes and people compared to any other region in the sea or ocean. The first notable sources of strange experiences in the region can be traced back to the 15th century.

In one of his many voyages while in this region in 1492, Christopher Columbus reported cases of strange fire balls crushing into the ocean and compass malfunctions.

Some have approximated the figures of disappearances in the last one hundred years as one hundred ships and planes each, and over a thousand people. Flight 19 Among the most notable cases of disappearances documented is “Flight 19”. On December 5th 1945, five fighter jets left Fort Lauderdale for a mission drill in the area defined by the triangle. The commander of the operation Charles Taylor was an experienced pilot although the other pilots were still students under his command.

About one and half hours after take off, Taylor reported to the air traffic controllers that his compass was not functioning.

The last faint radio signals to be heard indicated Taylor was in charge and flying farther away from the base in the wrong direction. One search operation plane was also lost during the search for flight 19. The remains of Flight 19 have not been spotted to date. Bermuda Triangle is an imaginary Theory In examining the above mentioned case of Flight 19, there were many indicators that Bermuda Triangle was an imaginary belief. All the documented evidence showed that Taylor had lost his way in deep sea and refused to control the the plane to a fellow pilot. A report was received that Flight 19 disappeared under mysterious circumstances.

Columbus among many others are said to have sighted lights in the sky that are associated with UFOs. One of the claims about this triangle is that, UFOs are responsible for accidents and disappearances. There is no evidence to suggest that lights are not from flying saucers and as such must be from UFOs. Similarly, the source of light can be one or many things: a meteor, lightning or earthquake. Additionally, in times of Columbus tracing the direction depended on the sighting of North star only visible at dusk. During all those other hours at sea, one could get lost over any number of degrees in the compass in any direction.

Conclusion In everyday life, such myths are a common place. Many people have spent much valuable time and resources in getting involved to these widely accepted “facts” in life. For instance, such beliefs could lead to potentially harmful behavior in case of sciences associated with health and medical practices. Examining the correctness of data and all the possible explanations to a phenomenon could be a great asset towards making important conclusions and decisions in life. Therefore the Bermuda triangle is case that has not yet been solved. 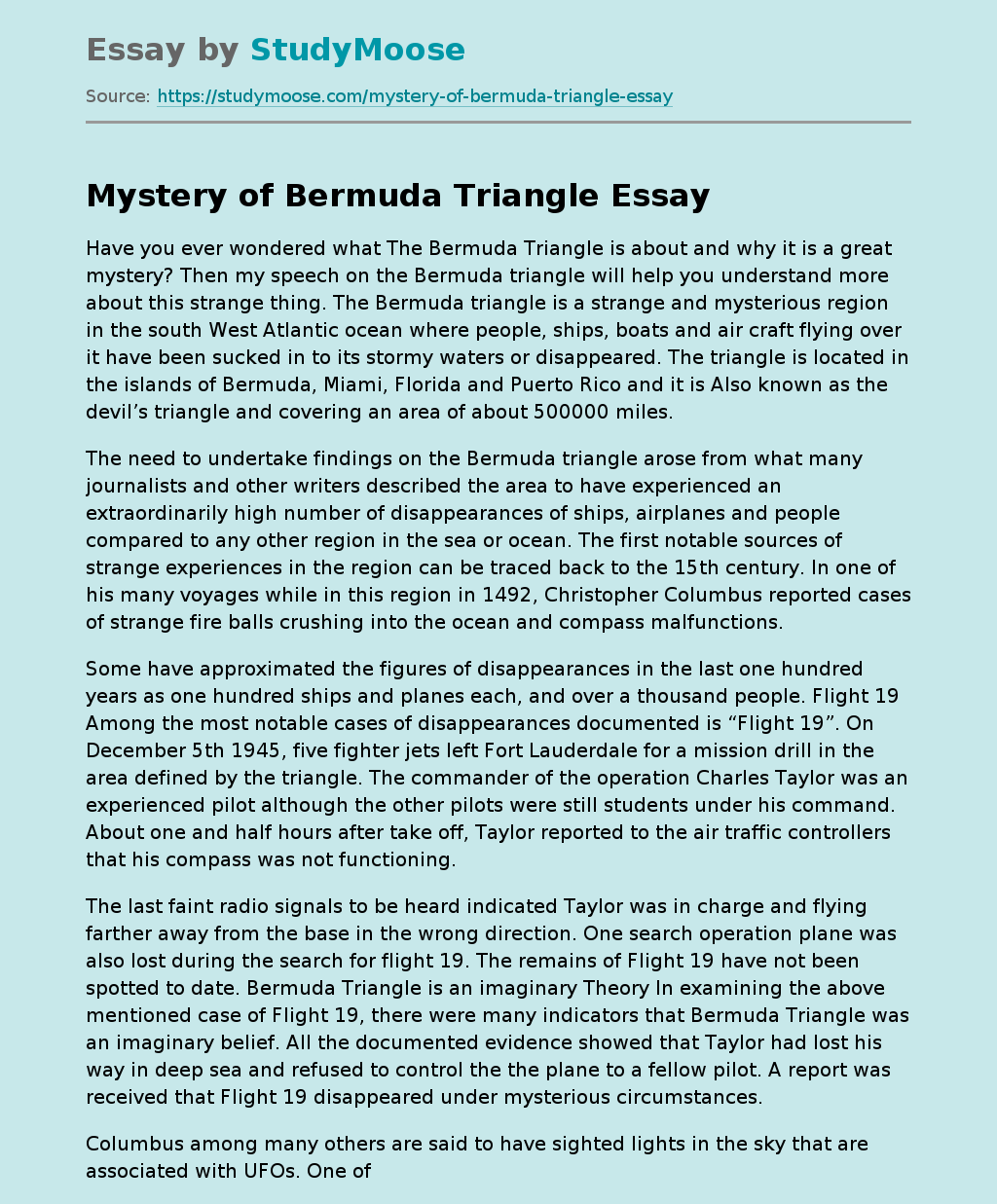