This is one of those classic icebreaker questions. We’ve all heard it – probably even answered it – before, and in most cases, we promptly forgot about the question until it was raised again. Then we’d hem and haw and pick another generic superpower, like flight, or super-strength or invisibility, and probably pick something different than last time. So I’ve decided to mull it over this time. If I could have any superpower, what would it be? I’ve probably imagined having all of the standard powers at one point or another.

Turn in your highest-quality paper
Get a qualified writer to help you with
“ My Super Power ”
Get high-quality paper
NEW! AI matching with writer

Flying saves on gas money, and you can always make a great entrance; super strength is great for when your wallet falls into that crack behind the desk; and we’ve all had enough embarrassing moments that we just want to be invisible for a while.

Of course, when I really think about it, would these powers really do me any good? I don’t generally get out of the house, and I feel like flying would involve a lot more effort and swallowed bugs than riding the bus or walking.

Super strength is great too, until your friends find out. Then you’re the first person anyone calls when they need to move. And invisibility? Well, it’s one thing to worry that everyone’s talking about that embarrassing thing you did, but at least they’ll courteously shut up about it when they know you’re there. So no, I’d rather not have one of the standard superpowers.

Besides, as any fan of superheroes knows, “With great power comes great responsibility.” I am quite content to minimize my responsibilities.

If I have to have a superpower, it has to be something so mundane, so trivial, that people wouldn’t even bother asking me to use it. Thus, I have decided on my superpower: Once a day, I want the power to spontaneously summon a bagel and a juice box. Sure, now and then if someone’s forgotten their lunch, I can help them out. But since I can only use this power once a day, people can’t count on it regularly. “Sorry, I already made my bagel today,” I would reply, and simply shrug. I can hardly be expected to solve world hunger with this, but hey, if I’m ever stuck in the wilderness, I’ll be able to hold out longer than most poor saps.

I leave myself with a moderate degree of flexibility in this regard. The bagel and juice box may be of whatever flavour I choose. I was originally tempted to expand the bagel selections to sandwiches, but that would just mean people would be more likely to ask me to summon sandwiches for them. And maybe there is still the potential to fight crime now and again. Muggers could be disarmed with a well-aimed, particularly stale bagel. Very small fires could be put out with the juicebox. Evil baby geniuses could be appeased with an afternoon snack, after which they would naturally have to take a nap and hold off on destroying the world. Of course, you couldn’t really expect me to be on hand in case such specific crises were in progress.

Maybe I got hungry in traffic, or I’d already foiled one bagel-susceptible plot that day. In that case, you’d have to leave saving the world up to all the folks who picked things like super-speed and super-nannying. It’s probably better that way. Knowing me, if I had a regular crime-fighting gig, I’d generally five feet into the air before I remembered that I should change into my costume. And that assumes I could actually make a costume in the first place. No, I think I’ll be just fine with my perfectly simple, utterly uninteresting power. 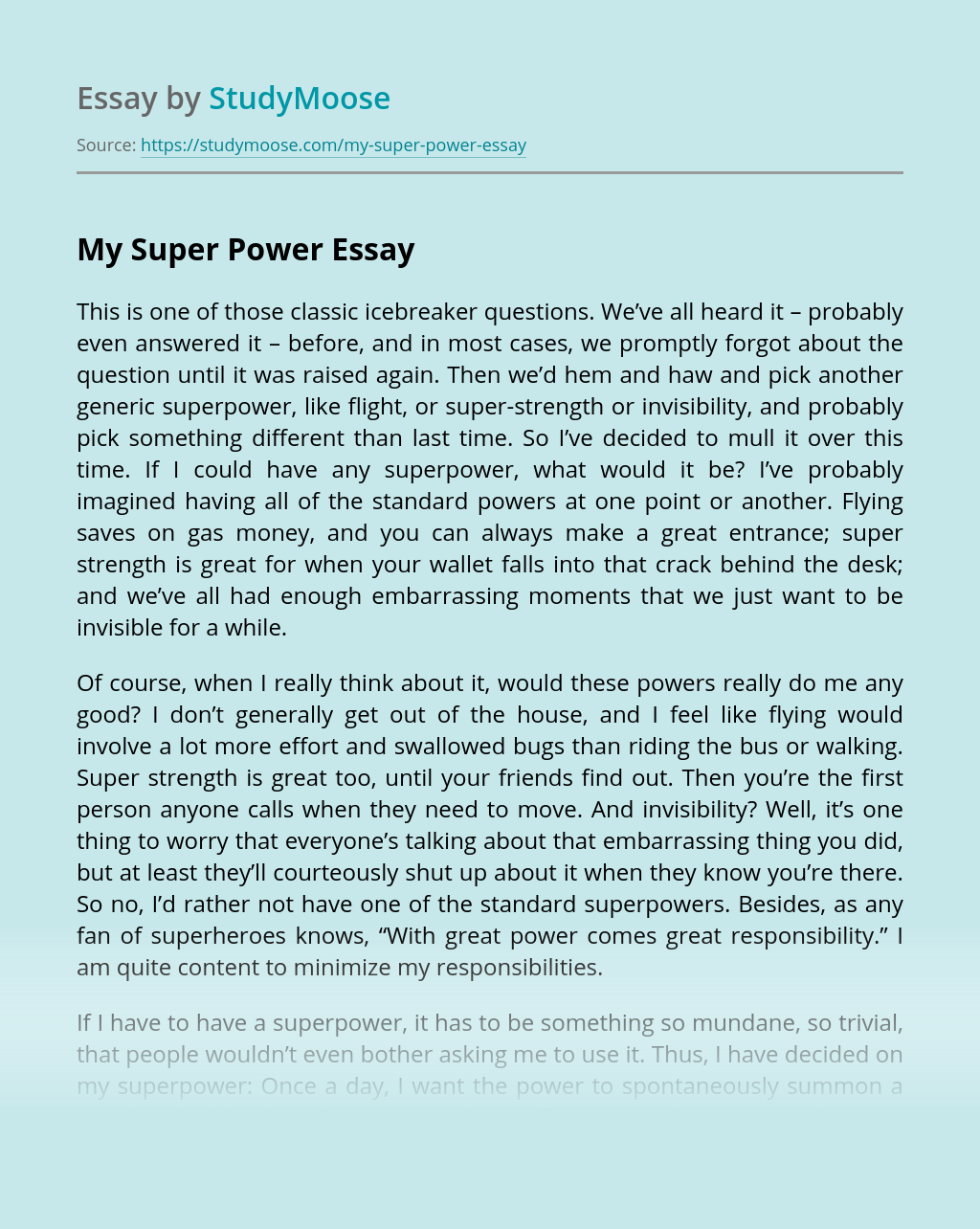 Turn in your highest-quality paper
Get a qualified writer to help you with
“ My Super Power ”
Get high-quality paper
Helping students since 2015
Stay Safe, Stay Original