My ride along wasn’t at all that exciting. It had a boring officer who seemed to not really want to have someone with him at the time. I did make the most of the time I had while I was there. I was very observant of the things that I saw around Polk county. For instance, the north side of Lakeland was more ghetto than the south side. It was completely noticeable just by how the business were kept and the type of stores that they have.

We drove around a few times just to make sure nothing crazy was going on and kept it moving. I’m not one to force the issue of trying to start conversation. I can continue to sit in silence with is pretty much what was happening unless there was a call on the radio dispatch.

One thing I can say is that if I ever became a cop and I was doing patrol I would need to have a partner, because I know I would go insane by myself for all types of hours of the night.

I like having company and I know that I am more prone to being more aware when I have someone to talk with, yet they also know we have a job to do. I’m a very sociable person when it comes to meeting people and doing things so for it to have been as quiet as it was, I felt awkward. I want to be able to talk and get to know a person, I just wouldn’t do that by myself.

I liked the experience though to be able to patrol the city. I just wish it had more action in it. I got the boring ride it seems like compared to what everyone else in my class was talking about with their ride along. The way I thought my ride along was going to go was completely different. I thought I would show up like I was supposed to and I would get a patrol officer who was actually excited about having a student around for a ride along. I wanted to be able to watch the officer have to chase someone on foot and I just stand by and watch as he arrest the person and confiscate the drugs or whatever it is that they found on the person.

After that, I figured we would drive around some more and stop and get coffee,we did that, and do some more patrolling. The later the night got I thought we would find some young kids out smoking or drinking underage and we would call in backup to get the group of kids off the streets and stop them from doing the nonsense that they thought was cool. After riding around I figured I would be able to talk about what I was getting my degree in criminal justice for.

The talk would have gone pretty good and I would get a good insight as to what goes through a patrol officers mind as to who they want to arrest and who they don’t want to arrest due to the significance of the situation. After all that, we would stop and get a bite to eat somewhere talk with some of the people wherever we decided to stop and get food just to have some random conversation and make everyone feel safer and confident in what their law enforcement was doing that night. I would get dropped off and go home. If that was the way my ride along would have went I would have felt a lot better and been able to be more enthusiastic about my ride along, but as you can see none of the even happened for me. 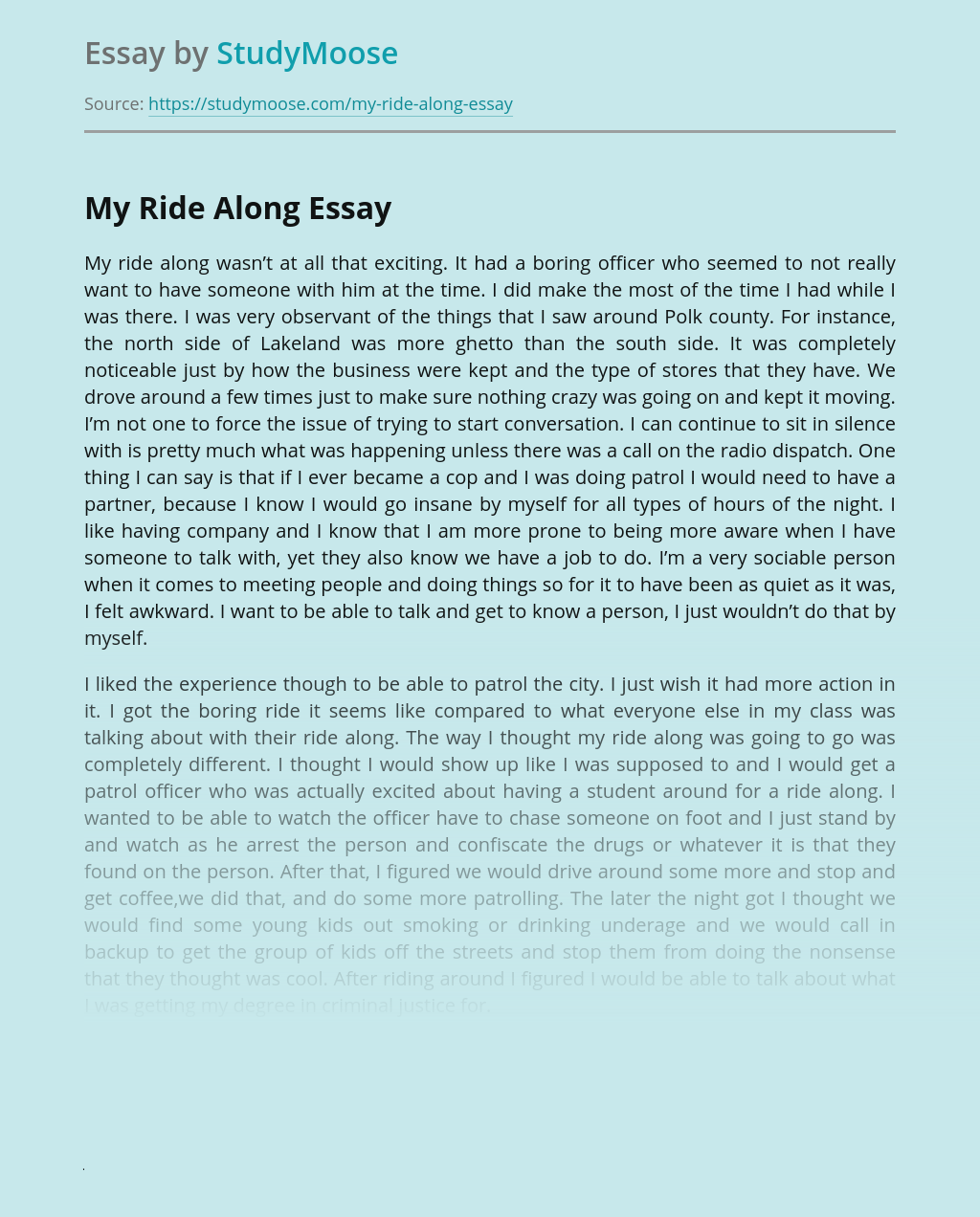