“My Papa’s Waltz” In Theodor Roethke’s “My Papa’s waltz” the reader finds a horrid experiance, the beating of a child by his father, which is told in a way of a romantic and beutifull dance – the waltz. The feeling one get from reading this poem is that the narrator, at least at the time in which the poem is written, does not look at this experience as something bad.

Don't use plagiarized sources. Get your custom essay on
“ My Papa’s Waltz Poem Analysis ”
Get custom paper
NEW! smart matching with writer

He tries to beutify the experience by making it a waltz. He also, by means of images and rythem, shows the conflict between the readers, or the way any other ‘normal’ man will look at this experiance, and how he sees it, or wants it to be seen ( although he does not show his father as completley innocent). It can also be looked upon as the Petty Herst syndrom – meaning having a ‘reality’ so intense and strong that one feels incapable of any other ‘reality’, fearing it can and will be worse.

The poem is built of four stanzas( quatrain ), each consisting of four lines. The rhyme scheme is, in the first stanza – abab, in the second – cdcd, in the third – efef, and in the fourth – ghgh.

The meter is trecet iamb ( stressed unstressed – three times per line ). The central image in the poem is the metaphor in which the beatings are described as a waltz. The poet is led around the house, dancing – not beaten around.

Which is also brought throu by the meter – trecet iamb – the beat of the waltz, thus the main image is shown through the meter as well, giving the reader more of the feeling of a dance in contrast to the ‘secondery images’ which are more associated with the rough experiance of a beating. Given such parameters the poet installs some sort of relaxation in the reader ( maybe even in himself ), in order to make the subject – the beating – more readable, and lessening the effect of the drunkness and the beatings, making his father more human. By this dance metaphor the whole routine of the beating is messeged. The drunken father, his breath ” Could make a small boy dizzy”, yet the boy hangs ” on like death”. The word death is important, usualy the word death, in love poems, shows truthfullness and undesputable love, as in marrige one promises to love to death, to never leave even if what is left is just a memory – as happens in this poem. The boy will love his father to end; although, a great bitterness remains in the memory – the drunkness, failure ( “every step you missed”), and the beating deriving from these failure and drunkness. For each failure ” My right ear scraped a buckle ” – The boy is acused for his fathers failures.

Another way in which the love to the father is shown is the way in which the father is described, by which the poet shows his love to the father, and his longing to him, is by calling him “Papa” – not father. This word is used, often, to fathers which with one has a special relationship, a certian love. The title in itself is misleading, reading “My Papa’s waltz” one will expect to find a poem about a father, good and loving, dancing this gentle dance, not, in ones eye not the poet, a beating father, a monster.Together with all these is the description of the father as poor man, one to be mercied. He is, as we already seen, a failure, he is drunken, propably a lot, for his breath reeks with ” whiskey “, he is dirty – his hands ” caked hard by dirt ” and are ” battered on one knucle” , all in all a poor man that all will pity, someone who needs love. Inspite of these showings of his father as a person that he loved, and still does, the poet uses the ‘secondery images’ – the images outside the main image – to show that the brutality existed. He does not lessen the impact of these beatings or thier brutality.The beatings was so hard that the ” pans Slid from the kitchen shelf “, the beatings were hard on the poet – ” Such waltzing was not easy ” – and also made a change in the boys point of life.

The poet tells that the father beats ” time on my head “, meaning the beatings made his childhood go away, time ran faster for him, beating him as his father did, as if making him mature faster than others, but he does not accuse his father of that. One accusing finger does rise, and that is toward the mother, who ” Could not unfrown ” her ” countenance “, as if the poet’s mother does not react in order to maintain this or that frown that will leave her ‘undignified’, as if stopping his father from beating him is not of her duties – putting the blame away from his father. Another explanation, farfetched as it may sound, is that of the Petty Herst syndrom. The meaning of this syndrom is that one may enter into a state of life,a ‘reality’, that no matter how brutal or harsh it may be, once it is in his mind as an absolute reality, this reality will look as the most suitable reality, escape is not needable, and even when the person leaves this reality it will still, in retrospective, be the best situation he was ever been.

It is possible that the narrator in this poem is ‘afflicted’ by this syndrome. He defends his father because to him it seems that this is the reality he should be in. He describes the beatings as a waltz beacause he sees it as such. Although the poem is narrated retrospectively, from a grown up man point of view, something remains, the poet does not hate his father for the beating, on the contrary, he shows us that the love to his father is not, and never was lost. And twice during the poem – he talks about ” But I hung on ” in the first stanza, and ” Still clinging to your shirt.” in the fourth stanza, which gives the feeling that he loved and stayed with his father during his childhood, and that he does that even now when his childhood is no longer with him. 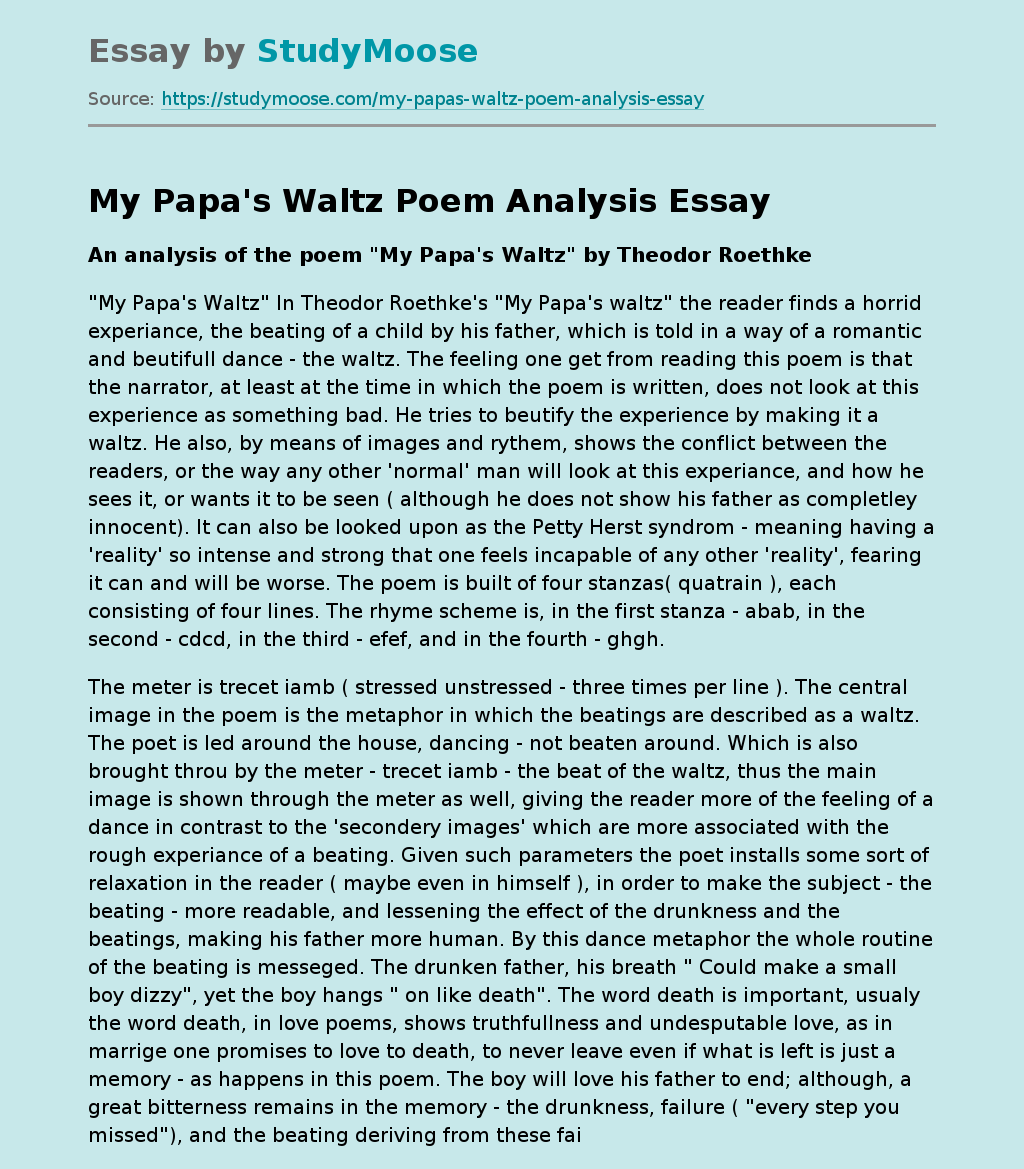