My Opinion About Play "Macbeth" by Shakespeare

Have you ever read a good book that was really interesting but the language was hard to understand? I have. For instance, when I’m reading a Shakespeare play, the language is ancient, and you have to annotate and take notes so you could understand it. Despite this fact, it’s easier to follow a Shakespeare play by watching it rather than reading it so students can have an understanding of what the play is about. Apart from the fact that watching the movie of the book might help understand the book, it’s still hard and too much work to do so it’s better not to read Shakespeare books.

Don't use plagiarized sources. Get your custom essay on
“ My Opinion About Play “Macbeth” by Shakespeare ”
Get custom paper
NEW! smart matching with writer

I don’t think that Shakespeare belongs in the modern English curriculum because of it hard to understand the language. There are several reasons why Shakespeare should not be taught in high schools. Adapting Shakespeare to modern English a bad way to engage students and audiences with these classic texts.

I do think Shakespeare should be praised for eloquent dialogues, precision, clarity, and pioneering in modern (relatively) expressions and language in general. Shakespeare’s writings also aren’t meant to be read. What Shakespeare wrote, regardless of high brow language, was simply a template for a play. he’s a bad writer who uses cliches to excel at what he does best because it’s not true, in fact, when you read some of his plays, we simply don’t know some of the words that Shakespeare used in some areas.

Example from the play Macbeth it says “That will be ere the set of sun”. This means that the battle will be finished before dawn. I don’t think any students or teacher would understand Macbeth now because the language has changed from today, they would have a hard time learning on what is going on from the book. The high-water mark of his influence has already passed, It lasted for just a century.

Reading or watching Shakespeare is, by turns, baffling, tiring, frustrating and downright unpleasant. His words were chosen to be spoken or heard, not to be read and deadened behind a desk.it was too grim, too dark, too disturbing, and it uncomfortably attempted to mix comedy and tragedy. Female characters are auctioned off to anyone who expresses an interest (in the sad ones, they all die. He cannot be a beacon for the future, because he belongs in the past. Shakespeare is difficult to teach, but good teachers make it palpable and an experience that builds, not destroys skills. Shakespeare’s plays are no longer fashionable, most of Shakespeare’s audiences were illiterate. Shakespeare’s language isn’t intended to be desk-bound it’s crafted for the stage. Adapting Shakespeare to modern English a bad way to engage students and audiences with these classic texts. Students lose the essence of Shakespeare’s plays if they read or see them in modern English.

My Opinion About Play "Macbeth" by Shakespeare. (2021, Feb 04). Retrieved from https://studymoose.com/my-opinion-about-play-macbeth-by-shakespeare-essay 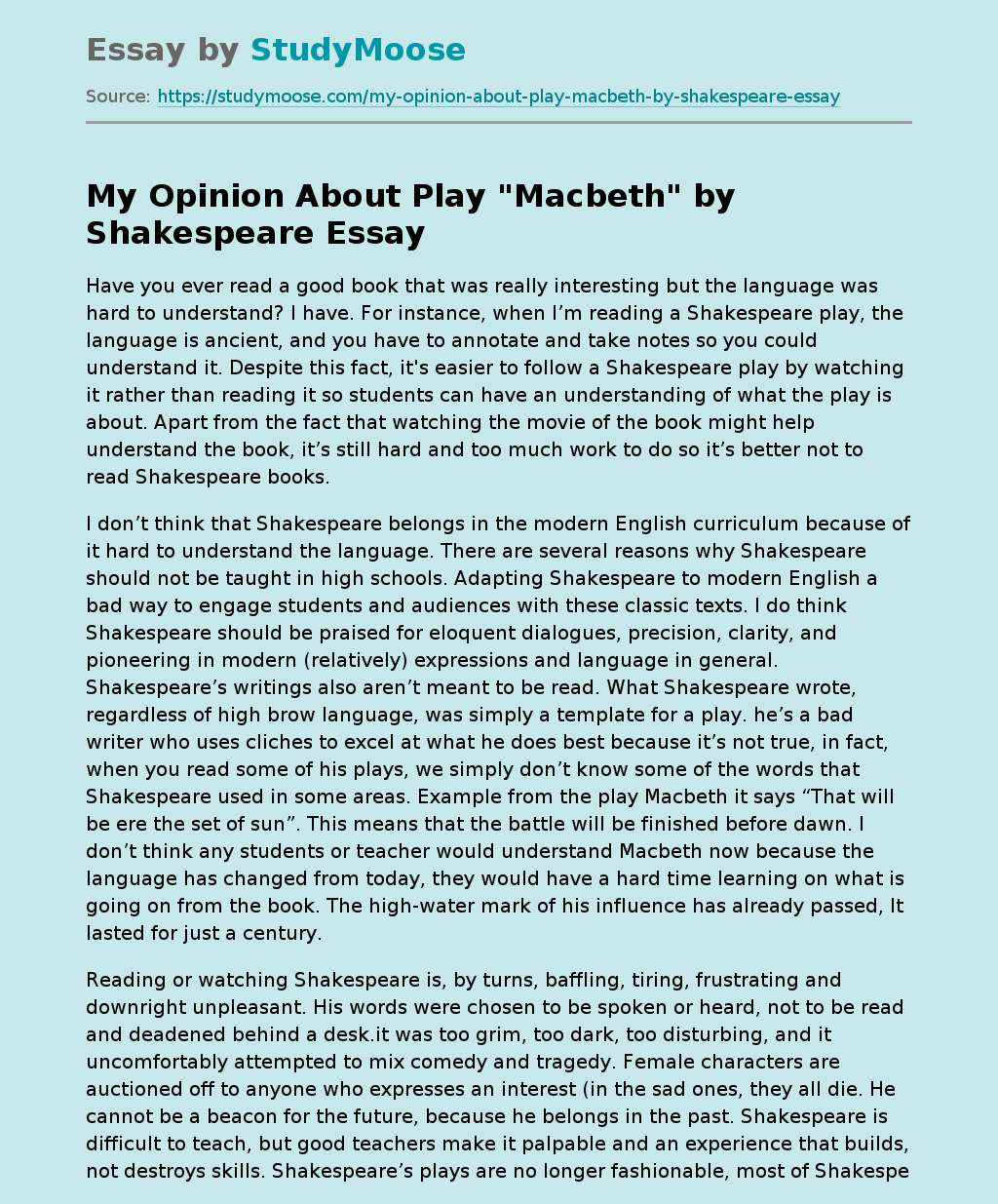