One thing I realized the day I started the negotiation class was that every day in our lives we negotiate with our friends, parents, siblings even with our professors. But I never knew the strategies that different people have used on me were negotiation techniques and in some situations I think because I didn’t understand the concept of a “BATNA” or “Reservation Price (RP)” I fell into the side where I didn’t get the best piece of the pie.

Turn in your highest-quality paper
Get a qualified writer to help you with
“ My Negotiation Class and Interpersonal Communication Skills ”
Get high-quality paper
NEW! AI matching with writer

I Biopharm Seltek was the first negotiation that I walked into this semester, and it is also the first negotiation that I prepared myself by reading and learning different strategies to use in different situations. I think knowing my BATNA and Reservation Price before I walked into the room and start negotiating was very helpful. Preparation is the key for any negotiation as Reading 5-3 “Preparing for Negotiations by Bill Scott” discuss in the article “There is no substitute for adequate preparation”.

I knew that I had to be well prepared with the information I had but at the same time think about few questions that my colleague from Seltek would ask and think about their reservation price as well, because not only I want to do a good job by understanding my reservation price and BATNA but to have a plan and idea of their RP in order to get a good deal for my company.

Reading the article “Preparing for Negotiations by Bill Scott” was very helpful in my case because after I read the case that was given to me; I started to set up my plan in a very simple way but also specific and flexible.

I did in three stages by brainstorming how I’m going to approach the situation and putting myself in the Seltek negotiator’s seat as well. After I came up with the plan I tried to get some background information about the Seltek negotiator. This is where the four Ps were really helpful, It was very important to understand the purpose of the negotiation and I believe because I understood the purpose I did a better job in getting a great deal for BioPharm. At the same time I was thinking about the relationship as well and think how I should me calm and listen to other party during the negotiation. During the time of preparing for the negotiation I had a question on how we should start the process, Should I go first or should I ask the Seltek negotiator to give his first deal on the table?. So I decided to think logically for a minute and decided if I go first I could have an anchoring effect on the other party therefor I should go first.

I also reviewed the article “Negotiation Analysis: An Introduction”, which led me to think deep on the interests (what their fundamental needs and priorities), Values (How can value be created and who is likely to get it) and the most important question barriers (What obstacles might prevent agreement and how I should be prepared to overcome the situation) I was positive that in this case their interest would be the patent they wanted to sell and because we didn’t have any interests and any structural background for the patent I didn’t want to purchase but I was thinking what if the negotiator from Seltek refuse to sell the plant without the patent. Understanding the needs was critical in this case. One barrier for me was anticipating their reservation price because I wanted to start as low as possible and not to fixate my RP on book value.

After having prepared my case I was very confident to go to the negotiating table. I went to the table prepared to start the negotiate by first introducing myself and putting my offer first. My first offer was to start at $8M without the patent. After I explained my reasons for asking for low (opposite land was there in the market for more than three years before it was sold) etc. Seltek negotiator said $15M for both and he said he needs to sell the patent as well. So I didn’t want to jump high which led me to say $8.5M and he said he wouldn’t go below $ 13M which led me to say $12.6M and I said I will also settle the tax of $200,000 as well. And we closed the deal. Lessons I learned from the case was that because I was specific and flexible I was able to cut a good deal for BioPharm by paying $12.6M for the plant and the patent even though the patent is not valuable to BioPharm I paid the amount hoping to sell it but if that is not possible plant is valuable for the $12.6M.

Another take away from the negotiation was by researching and thinking about other parties BATNA and setting high aspirations: key was not to be influenced by the RP. I also believe that by opening the offer with a reasonable amount to keep the other party interested. Once we came into class to debrief about the negotiation I understood how the body language is in these negotiations as well. So after I left the class I decided to do some research on body language on you tube and also started watching a TV show called “Lie to me “ which explain how our face expression and body movements show our interests to the other party and how we need to maintain a poker face during a negotiation. My intension was to use some of these techniques for the next negotiation case. I also understood that even though understanding the body language is helpful preparation is still the key for a goo negotiation.

In summary we need to prepare 80% before going to the negotiation table and think in different ways we could be challenged during the negotiation process but 20% takes part in the negotiation process where our understanding in how to ask specific questions and reading the other parties body language is helpful. After understanding the basic steps of negotiation I decided to think back on a situation where I had to negotiate and how I could have got a better deal if I understood the negotiation process. This incident took place the time I came to the US. At that time I was in a rush to buy a car and even though I researched a lot before going into the dealer when I went there I gave the sales person the criteria I was looking and he showed me few cars, I really liked one of them and I showed my interest to him.

I said I’m ready to pay in cash so what’s the best deal he’s offering me. He told me amount that was not in my range so I gave him a counter offer and he gave me back another offer. It was an offer that was in my range but because I wanted to get a better deal I was trying to bargain and he then said that he’s not the person who makes the decision so he needs to go back and ask from his manager. I was quite upset because I didn’t know that he was not the last decision maker and I told him that. But he explained how sorry he is and he doesn’t have the authority to make the final decision and how his salary depends on my decision.

I felt bad and I agreed to pay the deal they gave me. After reading the article “Negotiation Analysis: An Introduction” section Parties: I understood he was using a technique on me and I wouldn’t have fallen into the situation if I had a BATNA. And I should have taken the negotiation as strictly business and not made it personnel as the article “How to get them show money” talks about. I hope to use every technique I learn during the class and by reading the given articles into the real life and I hope to reflect all my learnings when I’m negotiating during the semester and outside class as well.

My Negotiation Class and Interpersonal Communication Skills. (2016, May 01). Retrieved from https://studymoose.com/my-negotiation-class-and-interpersonal-communication-skills-essay 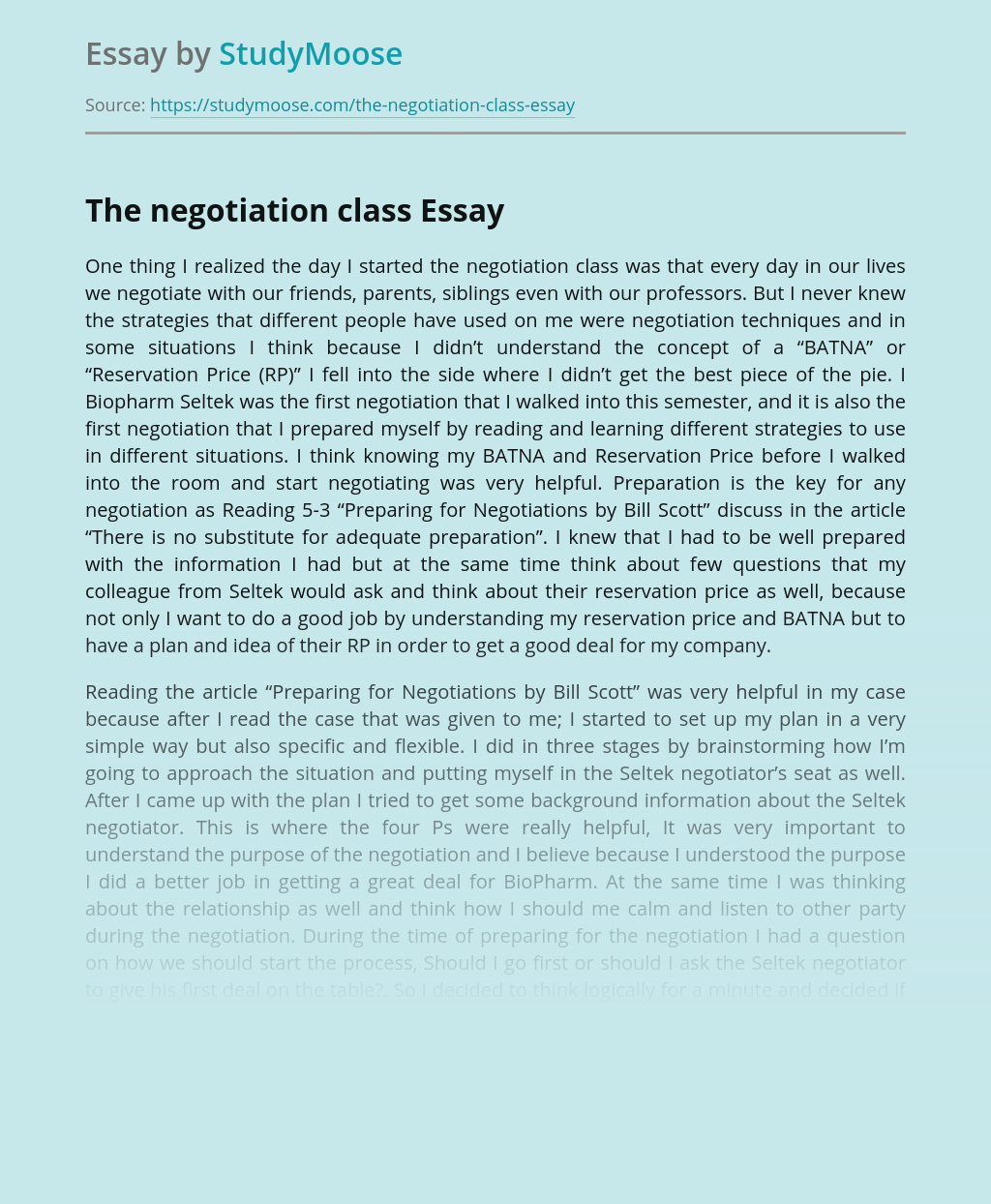 Turn in your highest-quality paper
Get a qualified writer to help you with
“ My Negotiation Class and Interpersonal Communication Skills ”
Get high-quality paper
Helping students since 2015
Stay Safe, Stay Original