How has Iago made his “medicine, work” on Othello.

This essay is to discuss the tribes and tribulations of Iago; how he has brainwashed Othello and caused devastation to many people throughout the text, such as Othello, Desdemona, Cassio and Emillia. I am going to discuss points such as why Iago was so dishonest to Othello; why he caused Othello and Desdemona so much pain and why he didn’t have no love or care for any woman including his wife Emillia.

Don't use plagiarized sources. Get your custom essay on
“ My medicine, work: thus credulous fools are caught ”
Get custom paper
NEW! smart matching with writer

Iago is a very bitter person who wants to make Othello miserable. Reasons for this are simple:

Iago is a racist who dislikes black people; he wants Othello’s title/position, as Othello is a high- ranking member of the Venetian army; he loves and wants Desdemona for his wife. However, this last reason is unlikely. Throughout the play, Iago refers to women in a sexist way; at the end of the play, he stabs his wife Emilia to death.

Obviously he is a man incapable of love. Throughout the play, Iago constantly refers to women in derogatory terms. For example, he says in Act two, Scene one, ” … you are pictures out of doors, bells in your parlours, wild-cats in your kitchens, saints in your injuries, devils being offended, players in your housewifery, and housewives in your beds.”

In this quote Iago is being very prejudice and sexist towards female. He has no respect and dignity for women especially his wife Emillia.

Iago intends to make Othello miserable by telling him that Desdemona is having an affair with Michael Cassio.

He will, to an extent, brainwash Othello, also causing trouble for other characters, namely Cassio, Emilia, Desdemona and Roderigo. Iago doesn’t care who he hurts in the process of all this. He is there to cause pain and hurt all round so he gets his own way. There are many reasons as to why Iago is like this, such as: he has emotional feelings for Desdemona; he is jealous of Othello, etc.

Iago begins to make Othello suspicious by dropping hints about Cassio, which leads Othello to find out what’s on Iago’s mind. Act two, Scene one: “That Cassio loves her, I do well believe’t “

Here Iago starts to say blatantly to Othello that he is sure Cassio has feelings for Desdemona. Again Iago carries on with his poison talk to brainwash Othello. Making him into thinking such things about Cassio and Desdemona. Iago begins to start repeating what Othello says which causes Othello to convince himself that Desdemona has been unfaithful. Reasons why Iago is being like this could be that Brabantio is still angry with Othello for marrying his daughter without consent. Brabantio was then murdered.

This is very unlikely though. Mainly the reason being the type of person Iago is. He is very cruel and envious person who lets his jealously overcomes him. Iago continues to seem reluctant to reveal what he claims he knows about Desdemona and Cassio. This just proves how intelligent and scheming Iago is. He strongly defends the importance of a man or woman’s reputation, and warns Othello to beware of jealously. Act two Scene one “At least into a jealousy so strong…judgement cannot cure”

This quote is from Iago forwarding jealousy towards Othello again using his poison to brainwash Othello. Maybe Iago’s poison works so well on Othello that he actually understands and feels the feelings Iago are feeling himself.

Now all of what Iago has been telling Othello has been pure lies. Iago is so corruptive and scheming that he falls into his own trap when Othello attacks him.

“To say my wife is fair, feeds well, loves company, is free of speech, sings, plays, and dances well: Where virtue is, these are more virtuous.” Act three Scene three.

This quote tells us Othello finds that being unfaithful to him is the worse thing she can do to him. So really this is perhaps his reason for acting the way he does. Later Othello says “No, Iago, I’ll see before I doubt; when I doubt; prove; And on the proof, there is no more but this; away at on once with love or jealously!”

This quote to Iago basically is trying to tell Iago if you prove to me that Desdemona has been unfaithful then I will believe you! Why doesn’t he just ask Desdemona himself? So here Othello assures Iago he’s not a jealous man. He says he’s confident of his wife’s virtue. Iago warns him to watch Desdemona with Cassio; she is capable of deception.

Iago now tells Othello that he has seen Cassio with Desdemona’s strawberry handkerchief. This was true but wasn’t intended by Cassio. It was placed on his love’s shoulder while she was asleep and then Cassio took it. Othello saw Cassio using it and thought immediately that Desdemona was being unfaithful and deceitful to him.

“Have you not sometimes seen a handkerchief spotted with strawberries in your wife’s hand?” Act three Scene three.

This Quote then starts to build up the tension between Iago and Othello because Iago is being honest and truthful but not for long. The significance of the handkerchief is that Othello was handed it to him form his Great Grandmother when she die. Othello then gave it to Desdemona as a token of his love for her. That is why it is so important.

Next Othello says the following:

“I know not that; but such a handkerchief – I am sure it was your wife’s- did I today see Cassio wipe his beard with.” Scene three Act three.

This quote then suggests that Desdemona has given it to or left it in Cassio’s presence. So now Iago claims that Cassio has Desdemona’s handkerchief. Othello fills with anger and hatred as this is not what he wants or expects of Desdemona and he isn’t happy with the he has to find out. Othello is overcome with jealous grief and vows revenge. To Iago’s call of patience, Othello replies his murderous thoughts will never change.

Othello is a black man who is high up in the Venetian army. At the beginning of the play we are given the impression that Othello has robbed Iago of his title. Act one Scene one “Off-capped to him; and by the faith of a man, I know my price…worth no worse a place”

This quote shows how Iago feels like he has been robbed of his title by Othello. Iago wanted to be higher then anyone because he is a very manipulative and vindictive person. Othello marries Desdemona without Brabantio’s knowledge and consent, which causes uproar. Iago suggests a way of taking revenge against Othello.

They shout in the street outside Brabantio’s house and tell him the news that he has been robbed. This then plots the play for what is going to happen. Iago will deceive Othello and do his best to cause trouble for Othello. So then he can rob him of his title. Iago is angry about failing to gain the promotion that has gone instead to Cassio. Iago, pretending to be Othello’s faithful supporter, warns Othello that Brabantio will attempt to break up the marriage. Othello is confident that his service to Venice and his noble descant will make all well.

I think that Iago was a very bitter and cruel man. He had no love for no one but himself and was bitterly jealous of Othello. Othello’s behaviour towards Iago was very vulnerable. Act one Scene two “As double as the Duke’s. He will divorce you”

This quote shows that Iago has to be very intentional by claiming quite blatantly that Desdemona will have nothing to do with you as you didn’t gain any consent or blessing from him to marry his daughter. Othello was also very gullible which didn’t help him disbelieve Iago. I also think that Iago’s jealousy caused so much trouble for people such as Cassio, Desdemona, Roderigo and Emilia. Othello’s behaviour couldn’t be helped because of Iago’s ways of brainwashing him. Iago’s brutal and ruthless actions throughout caused many deaths, at the end, which led to him being injured badly too.

Unfortunately due to Iago’s duplicitous ways he caused no end of trouble for Othello and Desdemona’s marriage. Therefore his aggressiveness savaged the lives of Othello, Emilia, Desdemona and Cassio within the play. From this play you can see what jealousy and power can do to so many people by just one deceitful being. Iago didn’t have any emotion and love for anyone but himself. He didn’t get what he wanted so he caused a stink until he won, but in this case Iago’s scheming intentions backfired. 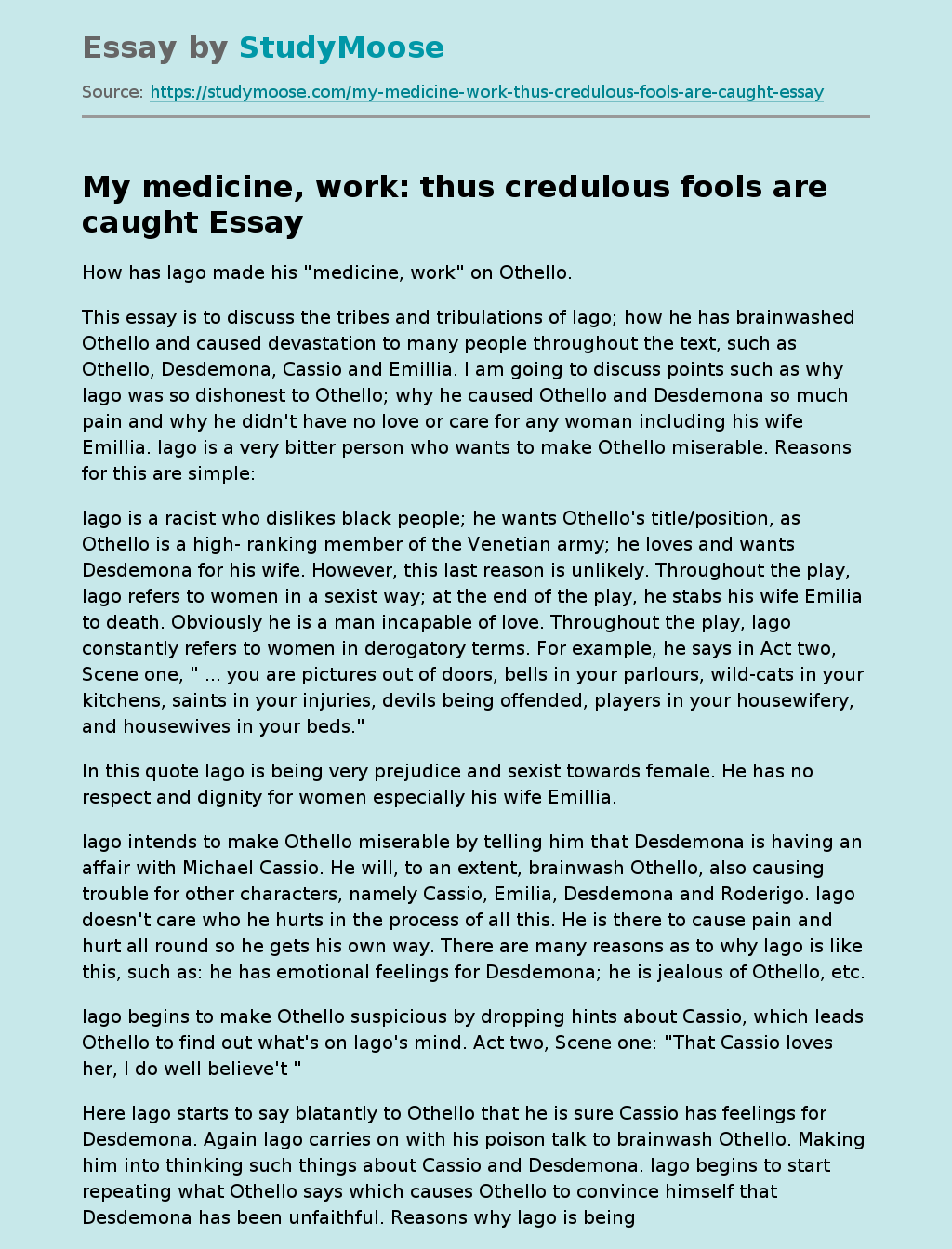