Robert Browning is known as the Master of Psychological dramatic monologue. In “My last Duchess” the reader only hears the Duke’s story whose perverse point of view throws false accusations towards his recently deceased wife. What the reader knows about the characters is limited, so he must piece together the story on his own. The story the duke thinks he tells, of an unfaithful wife who offended his dignity, and the story he really tells, of jealousy and possessive love that leads to murder, engages the reader on a psychological level.

Don't use plagiarized sources. Get your custom essay on
“ Robert Browning’s dramatic monologues In “My Last Duchess” ”
Get custom paper
NEW! smart matching with writer

Many of Browning’s main characters are of twisted psyche and in this poem the egomaniacal duke’s perception of conflict is severely distorted (Long 4).

Michael G. Miller’s essay “Browning’s ‘My Last Duchess'” discusses how the Duke unknowingly reveals his enormous ego as he describes the painting of his last Duchess. The underlying theme is the Duke’s dark secret of possessive love, obvious jealousy and resentment towards his belated wife.

Proficient in: My Last Duchess

Miller argues that looks can be deceiving and what someone says and what they really mean is often not the same.

Miller points out that the audience is mislead to believe that the Duchess was simple-minded and unfaithful. The misrepresentation of the Duchess begins when the duke explains what brought about the “spot of joy” on the duchess’s cheek in Fra Pandolf’s portrait. The Duke admits “‘t was not / Her husband’s presence only” (lines 13-14) caused her to blush. This statement is true but its phrasing leads to misunderstanding.

The Duke tries to make it seem that “The presence of men other than her husband,” caused the blush but that is not the case. When he later reveals his wife was easily amused, one can clearly see that “not her husband’s presence only” really means “The presence of many delightful things” brought about the Duchess’s blush. He allows the reader to take the statement in its negative form according to Miller.

The negative implications of the duchess are accentuated in the following lines when her blush is attributed to Fra Pandolf’s remarks. When the painter says, “Her mantle laps / Over my lady’s wrist too much,”(16-17) he is simply giving the duchess posing instructions. This dialogue, if taken literally by the reader, might seem innocent but its syntax provides a clue to uncovering the true intentions of the duke. Fra Pandolf “apparently speaks to the duchess in third person, a familiar convention of formality by which nobility is often addressed” says Miller. Fra Pandolf’s next remark, addressed to the duke “Paint / Must never hope to reproduce the faint/ Half-flush that dies along her throat” (17-19) is a compliment of his patron’s choice in women. The duke’s continued use of third person when recalling events suggests the compliment had been said directly to the Duchess. Fra Pandolf’s remark is taken out of context to make it seem as though the duchess enjoyed the seductive compliment, and therefore, lead to the blush. Intended as flattery, the comment had no sexual implications as otherwise reported by the duke.

In Miller’s critique facts are given to support his conclusions, he uses direct quotes and implied ideas to show how the duke reveals his true self. Miller should discuss the subject of egotism more; the reader is drawn in by his argument but is left to wonder about the duke’s true state of mind. Miller does not address all of the instances of the poem that show the Duke’s twisted psyche more evidence should be used to sustain his ideas and see the main character’s excessive pride more would be more evident. The excessive use of big words in the critique take away from the overall flow and limit the reader from fully understanding what Miller is trying to say. Miller is unbiased and accurate in his analysis of the Duke’s character by pointing out innuendoes in his dialogue. Miller is able to prove that there are double meanings in most of what the main character says.

Robert Browning’s dramatic monologues allow the reader a different kind of enjoyment, the pleasure of getting involved in the story line; a type of “detective fiction.” Browning allows his readers to find out on their own what is really going on in the story and Miller points readers in the right direction for understanding the true meaning. The lead character tells his account of the situation and from his words the reader can choose to take the narrative at face value or look deeper to infer a story that is never actually told. Michael Miller helps naive readers understand the subtleties that lead to truly understanding the poem that might be missed upon first reading. 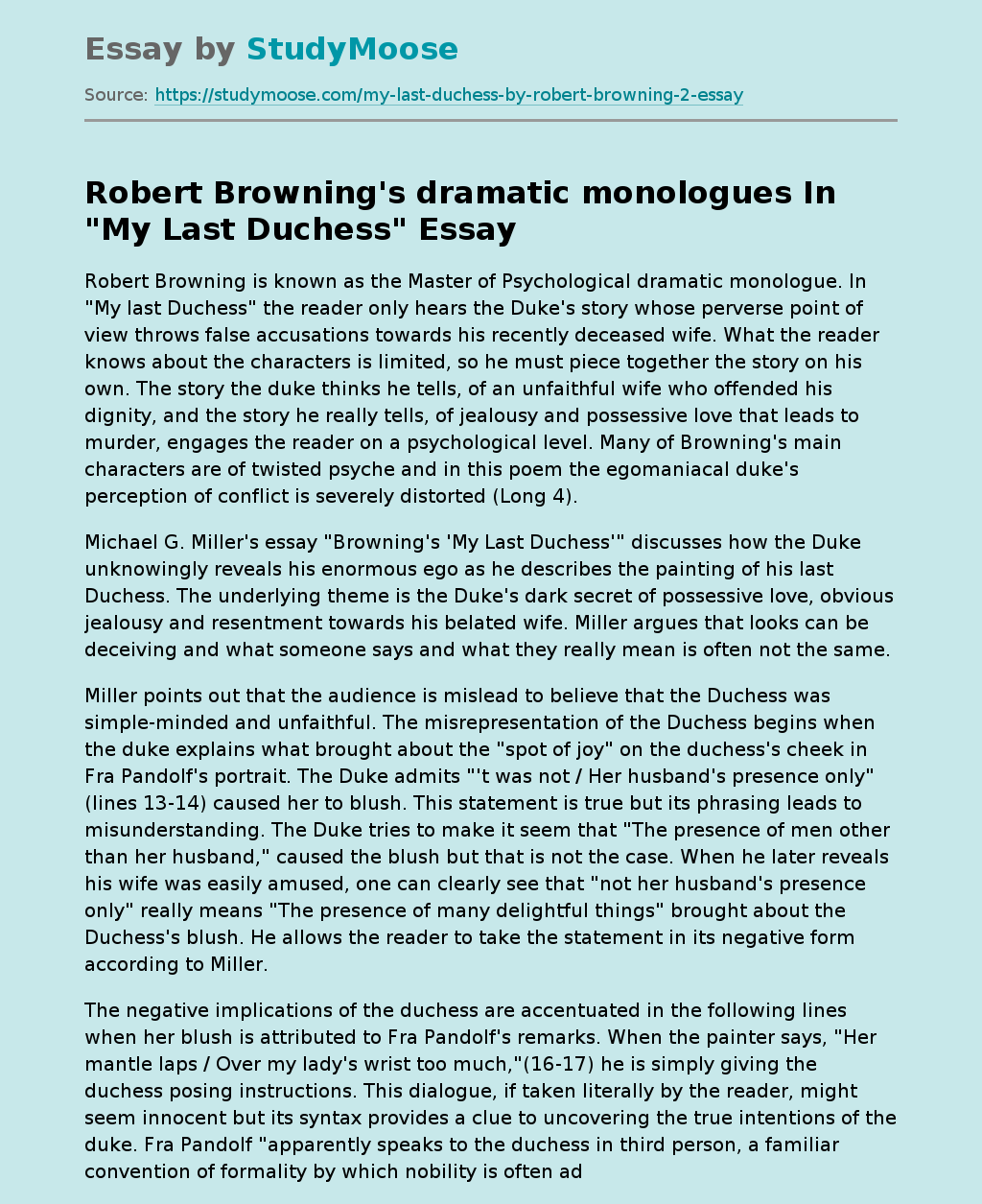