A very good morning to our teacher, Mr. l and my dear friends. Today I am going to talk about anime. Anime is becoming a lot more desired and reaching many audiences worldwide. For all that, there are a lot of masses that don’t know exactly what it is. So what is anime? Anime is the Japanese shortened word for animation. In countries other than Japan, anime is referred to as animation or cartoon originated from Japan. In Japan, anime is rather popular in form of entertainment.

Don't use plagiarized sources. Get your custom essay on
“ My Hobby Watching Anime ”
Get custom paper
NEW! smart matching with writer

It comes in form of TV show, movie in cinema as well as direct to video releases.

Most of them, anime comes from manga or Japanese comic, especially from those popular manga series. There are many well-known anime, such as Pokemon, Dragon ball, Doremon and the latest and most popular anime will be the One Piece. One Piece was released as a manga since 1997 and it has almost 500 episodes. My very first anime was Bleach, it isn’t the bleach that we use to wash our cloths.

Bleach talks about the story of a boy named Ichigo who has the power of a Shinigami or death god. My favorite anime is Fairy Tail. It is not all those bedtime story about the fairy god mother. Fairy Tail is series by Hiro Mashima.

It was one of the most popular anime in 2010. Fairy Tail is about the story of 5 magicians, Erza, Natsu, Gray, Lucy and Hapi which is a cat. They all are the magician in a magical guild named Fairy Tail.

This anime talks about their story when taking missions and fighting bad guys. I love this anime because it talks a lot about friendship. Fairy Tail is touching and funny too, it makes me happy every time I watch it. Besides, I also watched many other anime such as Black Butler, Fullmetal and Reborn too. Anime is growing in popularity, I hope it continues. Never seen anime? Go and try some. Watch and enjoy. Thank You. 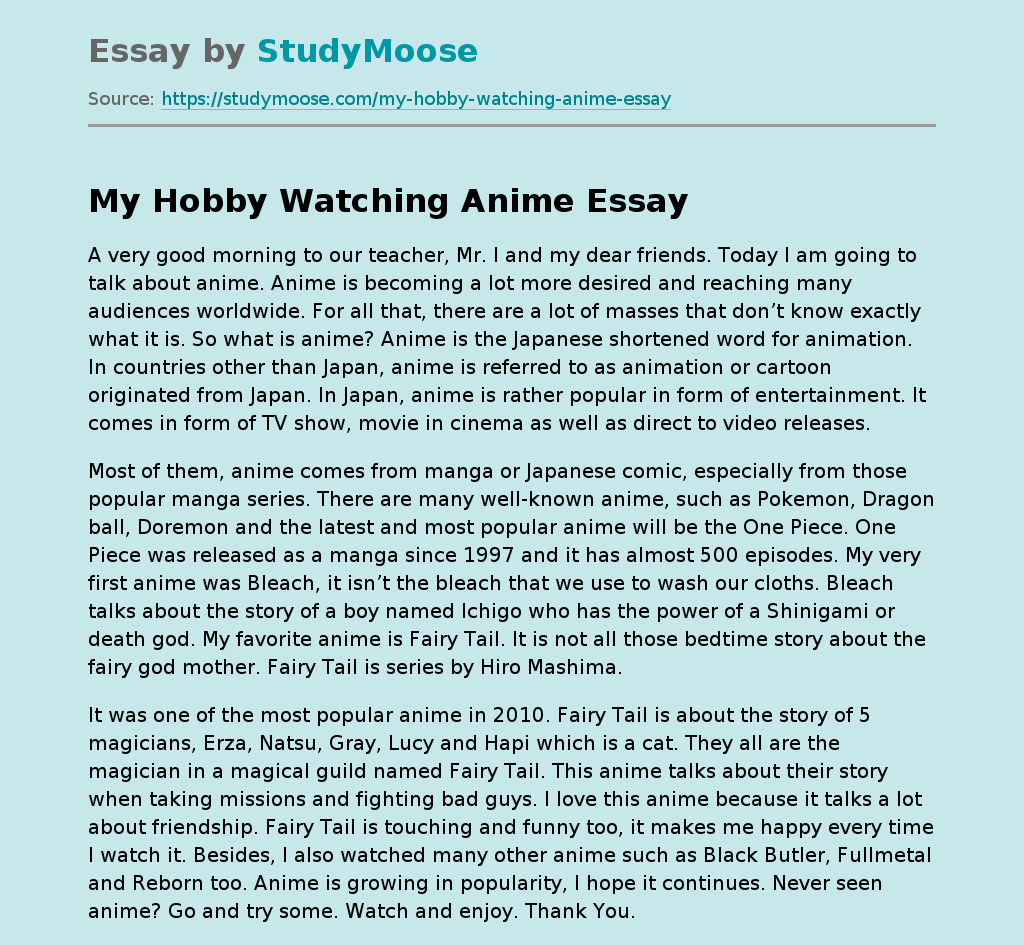