BC – 12 Narrative/descriptive essay My most unforgettable flight experience I have been exposed to traveling ever since I learned how to speak, whether by boat, bus, or plane. Living in Kuwait, a country in the Middle East, my whole family and I did our best to visit our family and friends back home in the Philippines. I learned the basics of traveling from my father and through observation. As a child I had always been excited before boarding a plane and as someone who lives far from a home country, learning to travel is a must.

Don't use plagiarized sources. Get your custom essay on
“ My first time traveling alone ”
Get custom paper
NEW! smart matching with writer

My father told me, that when you grow up you should learn how to travel alone. I figured that moment would be very soon. From all my experience of 11-hour flights, one stands among them all. My first time traveling alone. April 7, 2014 I had just finished second year when my parents told me the news of my transfer to Philippines. They said “since you are about to go to college two years from now, you should learn what it’s like to live in the Philippines”.

At first I was shocked because my life was in Kuwait, he friends and family that I cared for, I would all leave behind once I board the plane.

But since my father’s decision was final, I had no choice but to accept the change that was going to happen. My dad was the head of the family so I had to follow everything he says, he’s not very strict but when it comes to obedience, he must be followed.

Put all of that aside, my father also told me, “You should travel alone since we want you to become responsible.” All my years of experience would be put to the test. I already knew what to do, the ticket was ready but my mind was not. The thought of being alone with complete strangers and the thought of disaster prompted me to think otherwise. The thing that excited me the most was also the thing that scared me. April 12, 2014 finally the day of my flight came; I was all packed and ready to go. My family went with me to the airport to see me off and when we arrived the airport was bustling with people going to and in from other countries, it was a cycle that kept repeating 24/7. I thought to myself “it really is easy to get lost in a flood of passengers coming from different parts of the world, each having a different story to tell.”

After passing through the checkup point, the employees took over my guidance; there was no more daddy or mommy to help me. My first destination was a 1-hour flight to Abu Dhabi then a 10-hour flight to manila and from then on a 30 minute flight to Dumaguete. I had no problem checking in my baggage and boarding the plane because the employees were very hospitable, they assisted through almost everything including the paying of fines and finding the seat number. I was so scared at the time but the thought of a safe flight and the kind aura of the employees eased me a bit. During my one-hour flight to Abu Dhabi, it was 8:00 and I was just watching TV and ate the sandwich that the stewardess gave me nothing much happened after that and I just awaited my next flight to manila.

The 10 hour flight seemed short because the plane had mini screen TV’s attached to the back of every seat where we could play games and watch movies, three hours into the flight most of the passengers were already asleep, it was very quiet but I was caught up by the games that I forgot I was even alone. It was 7:00am when we were about to land, I opened a window and the sun shone so bright and seeing the clouds, it looked like heaven. I looked down and saw the islands, the boats and the water trail left by them made the view. I still can’t explain the feeling I felt looking through the airplane window. A moment after that, the flight attendant made an announcement that we were about to land.

Almost all of the passengers were awake and I was thinking of the possible dangers that could happen, but before I knew it we had already landed. Knowing that my trip is coming to a close I bought a souvenir which is a small plane attached to a keychain but for some reason I lost it three months later. Outside the airport my older cousin was waiting outside, she was studying nursing in Manila; she guided me to the next terminal where I would await my next and final flight, which is bound for Dumaguete. I boarded the plane and landed in Dumaguete 30 minutes later where my other relatives were waiting. That night I was reflecting upon the flight I had, I did not know I would miss it so much. Although the trip was over I wasn’t fully recovered from the experience and can’t wait to tell my parents about it. 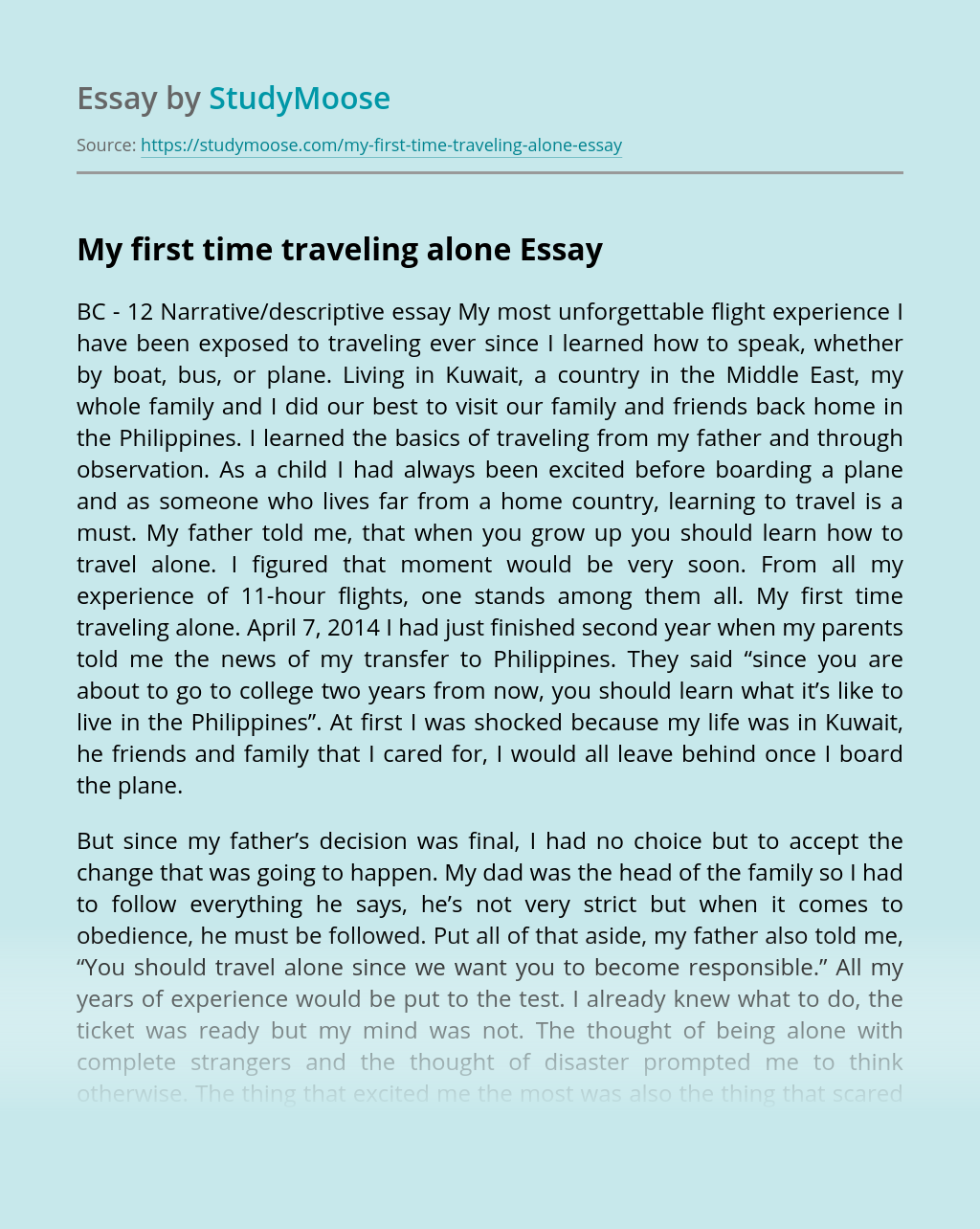