My first day in an English speaking school

I thought back, to everything, everything that had happened and where it all had started. Here, it had started here. Memories flooded back, memories of people, memories of places, memories of… of everything. With one last look around I took a deep breath and boarded the aeroplane, I was ready. I arrived the day before the start of the second semester. Though my things had arrived almost a week before, but I had been content living out of a suitcase if it meant I could spend more time at home.

Don't use plagiarized sources. Get your custom essay on
“ My first day in an English speaking school ”
Get custom paper
NEW! smart matching with writer

I sighed and looked around; they had tried to make the room nice, though from what I was feeling, all I wanted was my bed, in my flat, in my country. Looking around once more, I saw framed pictures of words- English, of course- I could not really read them. I felt betrayed, like someone had mocking me by putting them there. I was crying, I couldn’t stop; everything felt like it was cracking, falling apart at the seams.

I had never felt so alone; I wasn’t close to anyone, not to my dad, step mom, brother, I didn’t feel I would ever be close to anyone. I fell to sleep feeling hopeless, alone, and desperate.

Almost an hour later, someone was knocking on my door, calling my name. The voice was soft and American, blending the syllables of my name; I was being called to dinner. When I arrived downstairs, I found the food prepared was not too different from that of my home, I was at least a bit comforted because of that.

While having dinner, my step mother and brother tried to converse with me, because I had prided myself in knowing a bit of English. I soon found out this was not the case, when they would speak, it was slurred and natural; when I spoke, it was halted and awkward. My accent impeded some of pronunciation, I sounded like an infant. While the conversation was stilted, I felt at least a bit more at home. Before sleeping, my father informed me that I would be attending American school; I would have a translator until I could speak with more fluency.

When I arrived at the school, my father couldn’t accompany me into it, so I had to try to find my way to the office, explain myself, and make homeroom before the bell; needless to say, I was a bit worried. I found the office after using a translating app on my phone. In order to make the women in the office understand me, I had to once again use my translating app, after understanding my situation; they called my translator, who I learned was called Mary. When Mary and I had finally met, I felt a great relief at having someone to talk to, while Mary was still very American, it was nice to have a person who spoke French around. My first class was ironically English; I went in late because they had wanted to check that I could understand a bit of English, seeing as my first period was English.

When I arrived in the class, the teacher asked me to introduce myself, before I had even reached my seat; not realising she was talking to me, I ignored her until Mary told me what she saying. I turned around and quietly tried to stammer out my name. The teacher didn’t understand why I wouldn’t speak up. When Mary explained my situation, the teacher understood and tried to apologise. I was so embarrassed and tired at that point, I didn’t even care, I just took my seat and tried to understand what was going on. Second period was at least a little bit better; I had maths, so I could actually understand what the teacher was saying (for the most part). Third period was different, because I had never had American history. Because I had come into the class in the middle of the year, I had to try to catch up to the rest of the class. In her between discussions of the twenties, the teacher would have to pause because Mary would have to translate for me.

This whole process made the class seem very long, and tedious, and the teacher was annoyed by the end. At the very end of the class, the teacher came over to talk to me. I was very surprised when she started speaking French, even more so when she explained to me that she had grown up in France and was therefore fluent. She proceeded to tell me that in order to accommodate for my English as a second language, she would print out her lectures in both French and English. I was delighted, seeing as none of the other teachers had offered to accommodate for my situation. I went to my next class feeling much happier. Entering my next class, I found that it was actually a French class I had been signed up for. French was the highlight of my day, I could understand what the teacher was saying (even if she butchered the pronunciation), the people tried to talk to me, and I didn’t feel completely isolated.

After French was lunch, in France we had assigned lunch tables, and when I turned to ask Mary where to sit, I found she had already taken her lunch break. When I entered the café, I found that people had already saved seats for me; I had the pick of the café. I finally sat with some people I recognised from French class; almost immediately they started asking me where I was from, and why I not speak English. When I had settled in and tried to comprehend what they were saying, I tried to answer in English. When I finally figured out what I would say, I stammered out something like this, “France, en Paris, where I live.”

Everyone thought it was just brilliant that I had an accent, and proceeded to try to imitate it. I was a bit overwhelmed, as it was a lot to take in; people were just talking away in English, while I was just there, smiling and nodding. When you don’t understand the language, everything gets very confusing, very fast. By the end of lunch, I had started to come to terms with using English instead of French, though I was still not completely comfortable. When lunch was over, I had to head to another building where my orchestra class was to be held. When I got there, I found that I was in a senior orchestra class, which I thought meant it would be simple and easy for me.

I was surprised to learn that, there was no one my age, and that I was the youngest in the class. Ironically enough, the first song we would be playing was Offenbach’s Chanson de Fortunio, a very French piece to play. I learned later, the teacher had apparently picked it for me, because both it and I were French. After hearing me play just the Offenbach, the teacher had me moved to first chair, the best place to play cello. Orchestra was by far the best class for me, that day. After my double period of orchestra, I had natural science; science was a fine class to end the day with, because for me the Latin terminology and “learning” the metre system was a breeze. Science moved into an x period, for studying, or in my case, ESL help. All ESL help was, was help with English fluency. After the x period, it was time to go home. All in all, my first day at an English speaking school was not as bad as I expected.

My first day in an English speaking school. (2016, Sep 24). Retrieved from https://studymoose.com/my-first-day-in-an-english-speaking-school-essay 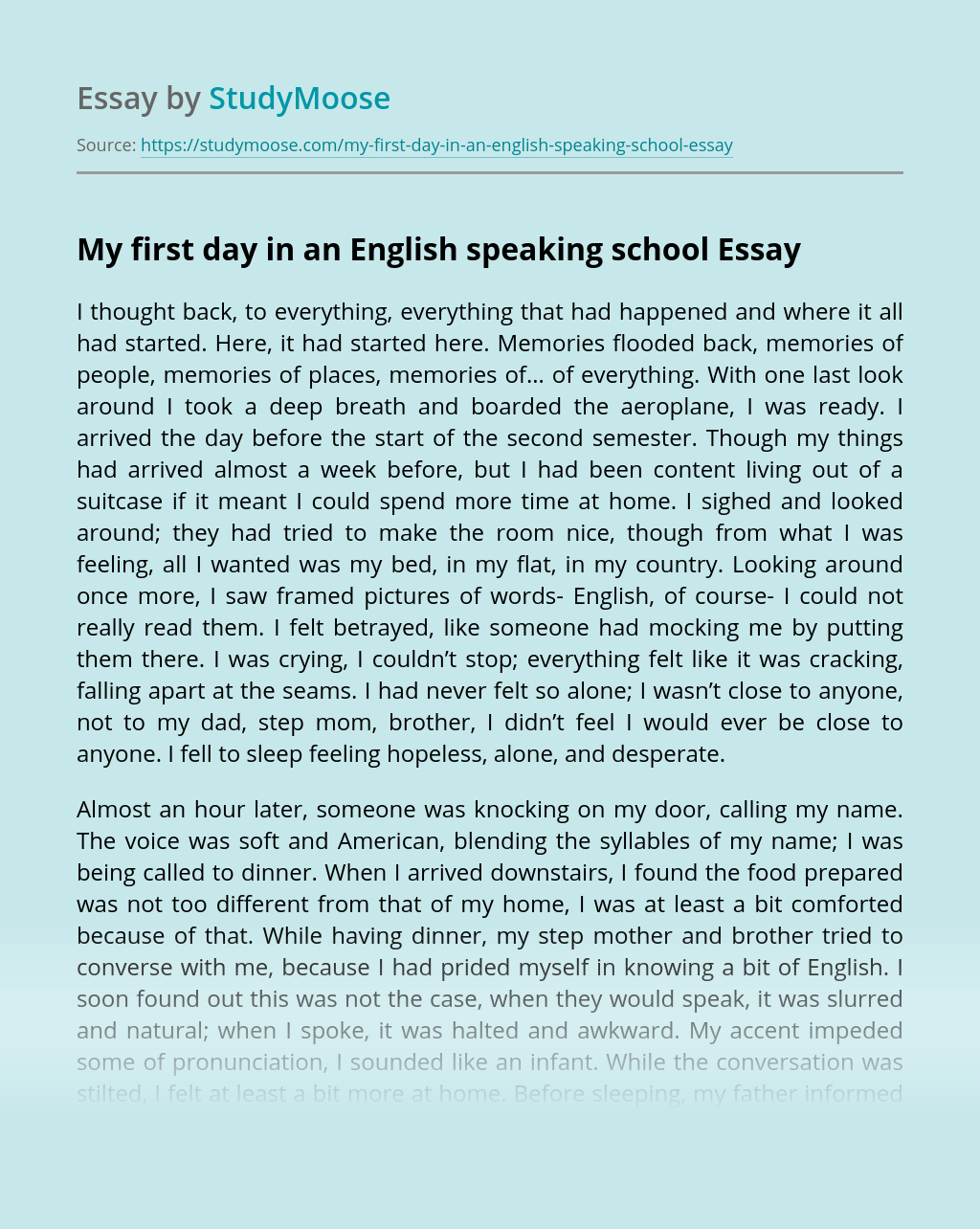