Tim McGraw is an American singer and song writer. Many of his albums have been on top music charts, making him the third best-selling country singer. Tim McGraw wrote the song “Live Like You Were Dying” for his father Tug McGraw who died of a brain tumor earlier in the year (Wikipedia, Tim_McGraw). The purpose of this rhetorical analysis is to explain the meaning of the song by Tim McGraw, “Live Like You Were Dying.

Don't use plagiarized sources.
Get Your Custom Essay on My Favourite Song Live Like You Were Dying Just from $13,9/Page

” If we examine the rhetorical situation including the text, the author, the audience, the constraints, and the exigence then we will better understand the meaning behind the argument that Tim McGraw is trying to present.

Tim McGraw is trying to display his song to three different audiences. The first group of people are people who enjoy country music. Although some people may not be able to relate to this song, it is still well liked because of the way he sings it with a country flare.

Tim McGraw establishes ethos in the song because he knows how it feels to lose a loved one. Tim McGraw found out his father had a tumor and only had a short amount of time left with him. He uses the lyrics “I spent most of the next days, lookin’ at the x-rays, talkin’ ’bout the options and talkin’ ’bout sweet time” (Live Like You Were Dying, Line 4) because he knew that time was very precious because he didn’t have much of it left. Tim McGraw’s purpose in this song is to send a message to inspire everyone to “live like they were dying.” He states questions throughout the song, for example, “Like tomorrow was the end and ya got eternity to think about what to do with it, What should I do with it?” He makes people think throughout the song about what they would do if they thought that their life was going to end.

In the song Live Like You Were Dying, Tim McGraw may face some constraints when it comes to people listening to his song. Constraints are limitations or restrictions (dictionary.com). In the song, a constraint that the listener might have is that they don’t like country music. Tim McGraw is specifically a country singer so if someone does not like country music they might not listen to this song even if they like the lyrics. Another constraint is that not everybody can relate to this song.

This song talks about a death and not to take life for granted, but some people may have never gone through the death of someone they love and might not understand that you should live everyday to the fullest. The last constraint that the listener may have is a personality constraint. Some people are very conservative and might not agree with living life to the edge. Some people like to live more cautiously and do not like the idea of trying new things and being “dangerous.” A constraint that the author has in this song is losing his father. Tim McGraw has credible ethos in this song because he knows how it feels to lose his father.

The purpose of this song is for Tim McGraw to use his experience with his father’s death to send a positive message. Tim McGraw made an upbeat song talking about not taking life for granted and living each day like you were going to die the next. Tim McGraw uses logos or evidence of this in the song by using examples like “I went sky divin’, I went rocky mountain climbin’, I went 2.7 seconds on a bull name Fumanchu” (Line 10) to show that people should do things that they may have always wanted to do because they may never know when it is too late to do them.

Tim McGraw uses multiple tones throughout the song. His tones or pathos are serious and encouraging. He uses lyrics like “Someday I hope you get the chance to live like you were dying,” (Line 38). These lyrics are one the the most powerful lyrics in the song. He is encouraging everybody is live like they were dying and making it seem more of a blessing than a curse.

The exigence is what caused the person to write the song. The exigence of the song “Live Like You Were Dying” was the passing of Tim McGraw’s Father. He wanted to give a more positive spin on something that is not positive for many people. Tim McGraw conveyed that people shouldn’t be afraid to do things because that will lead to a life full of regrets. McGraw gave many examples of things that he would do if he found out he was dying like “I loved deeper, And I spoke sweeter, And I gave forgiveness I’ve been denying” (Line 13).

My Favourite Song Live Like You Were Dying. (2016, Sep 26). Retrieved from https://studymoose.com/my-favourite-song-live-like-you-were-dying-essay 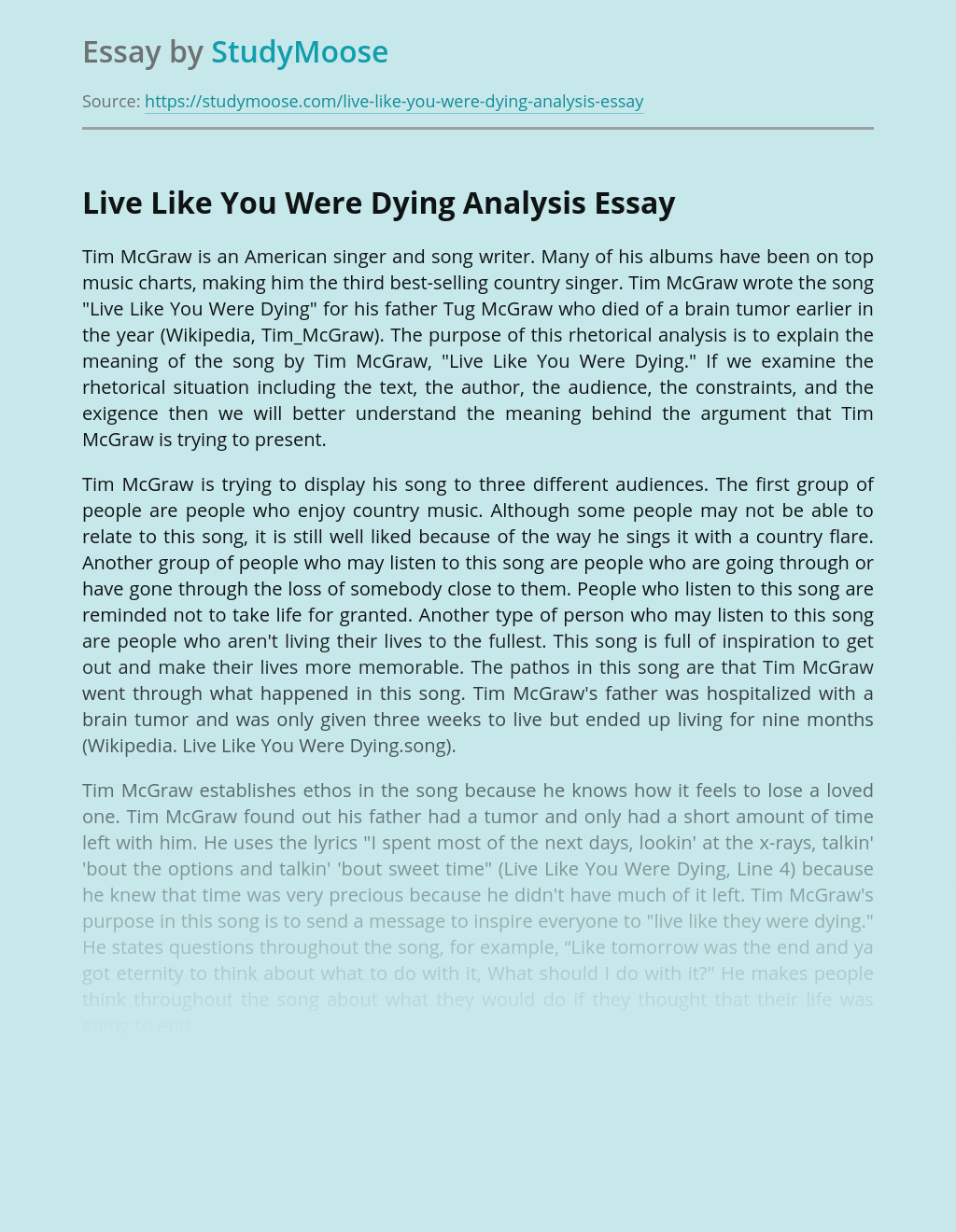