My family is a typical Christian family

My family is a typical Christian family they go to church every Sunday, bible study every Wednesday. They’ve been baptized they did the drink god’s ‘blood’ thing but it was just actually wine with a cracker. I’ve had to do it all I also went to church every Sunday and Wednesday I was that kid who fell asleep because it would be 9am on a Sunday morning with a guy just talking about something that doesn’t make sense.

Don't use plagiarized sources. Get your custom essay on
“ My family is a typical Christian family ”
Get custom paper
NEW! smart matching with writer

I was raised to believe in god but the whole Christian thing isn’t for me it never really affected me as it did to my parents. All the stories in the bible never made sense all these rules to follow never made sense.

Transition: that’s why it brings me to the whole idea of God is not real.

Thesis: these days there are people going to church and worshiping something that could possibly just be a myth that’s been going around for thousands of years creating cults that believe in heaven and hell.

An atheist is a person that does believe in any god. ‘Atheism is too often defined incorrectly as a belief system. To be clear: Atheism is not a disbelief in gods or a denial of gods; it is a lack of belief in gods. Older dictionaries define atheism as ‘a belief that there is no God'(Cristina). A Christian is a person who follows Christianity an Abrahamic monotheistic religion based on the life and teachings of Jesus.

Body Paragraph #1 people say there is a god because they want something to believe in that there is an almighty ruler of the afterlife and the current life.

‘We human beings think about things, make up our minds, ask questions, and choose some options over others. For God, there are no options in any meaningful sense of the word. we like to think and make up what we want to believe'(steven 1)

people want to believe things that they don’t even know if its real or not.

‘gods’ name is always being tossed around in multiple different occasions Christians say you should not use God’s name in vain or he will punish you but everyone does and nothing has happened to anyone.

people use god so they can have some to also blame

then you have a family member die you think why god why did they have to die. When something goes bad in life you scream at god hoping that it makes you feel better.

‘Theologically, and abstractly, we can say “God is responsible for all things because God created everything.”(Jordyn 1)

either you believe in God to just into belief in someone or you believe in him to have someone to blame for everything that goes bad in your life or you use him to make yourself feel better about what happens in the afterlife.

Use a transitional phrase and/or draw a connection between Assertive Topic Sentences.

Any ‘evidence’ proposed by the theists to support the various historical supernatural is nonexistent. The bible is historically incorrect, factually incorrect and contradictory. It was constructed by a group of men in antiquity and is poorly translated and heavily altered and selectively interpreted. Entire sections of the text have been redacted over time,

‘Beauty and biblical evidence both lie in the eye of the beholder, it seems. No evidence of the events described in the Book of Genesis has ever been found. No city walls have been found at Jericho, from the appropriate era, that could have been toppled by Joshua or otherwise. The stone palace uncovered at the foot of Temple Mount in Jerusalem could attest that King David had been there; or it might belong to another era entirely, depending who you ask.’

Abraham pursued enemies to ‘Dan’ (Gen 14:14). That name was not used geographically until after the conquest (Judge 18:29), Gen 36:31, telling of Jacob and Esau, lists kings of Edom “before there reigned any king over the children of Israel.” This must have been written hundreds of years later after Israel had kings., Joseph tells Pharaoh he comes from the “land of the Hebrews” (Gen 40:15). There was no such land until after the conquest under Joshua. (

‘A lot of people claim the Bible is perfect and without error. Most of these people have never actually read the Bible, other than cherry-picking the few verses they think are nice’ (Jeremiah 1)

this shows that the bible cannot be trusted

in the bible, it says the earth was made somewhere be 6000-7000 years ago by god well this is false

earth formed around 4.54 billion years ago, approximately one-third the age of the universe, by accretion from the solar nebula. Volcanic outgassing probably created the primordial atmosphere and then the ocean, but the early atmosphere contained almost no oxygen

3 And God said, ‘Let there be light,’ and there was light. 4 And God saw that the light was good. And God separated the light from the darkness. 5 God called the light Day, and the darkness he called Night. And there was evening and there was morning, the first day. (Genesis 1).this is how the earth was really made the story of God creating the earth is just silly there’s no evidence that he made the earth. We have a lot of evidence that God didn’t make the earth we even have some of the smarter people on earth tell us how the world was created they even wrote books on they told you how impossible it is for God to exist. Steven Hawking the smartest person that ever lived on this planet wrote a book about how God did not create the universe.

‘God did not create the universe’,

the smartest person even believes that God did not create the universe its kind hard to believe a book over an actual person who actually proved it.

science is hard not to pick when there’s proof and there are people especially scientist telling me how the world was made there’s not a doubt in my mind that the big bang theory is real.

in the bible, there are many verses that say when you die your soul is judged by God

when you die your soul is automatically gods he chooses where it goes Christians believe if they go down the right path God is gonna choose them for heaven.

heaven is not real

heaven and hell are not real hell are just to scare Christians so they do the right thing in life.

people believe in things all the time to make themselves feel better.

it shows that even the brightest minds in the world say that heaven and hell are not real.

parents tell their kids when they’re young that they can be good and go to heaven or be bad and go to hell this is religion being forced upon you.

religion sometimes are always forced upon kids when there young

when I was young I was forced into Christianity it because it made them feel better made my parents that me being a believer would keep me on the right path.

‘parents most of the time forced religion on children, just because they believe in it’

with Christian parents going to church every Sunday they’re gonna bring their kid with them which would have them go through all these Christian rituals would be forcing them into a religion at a young age.

it shows that growing up in a Christian family always is not a good thing they have these strict rules on their kids which have their kids grow up and be weird.

some Christian are not even actual believers some don’t even actually believe in the religion they say they are believers so they can be apart of a group I would know because I used to be on of them.

‘This poll asked Americans if they believe in God. The answers were fascinating, 20 percent of Christians don’t believe in the God of the Bible'(Burton 1)

as in 2018 this year there is %20 of Christians that don’t even believe in god and bible there are about 2.18 billion Christians around the world that’s 436 million people who are false Christians

there is no evidence at all on how god is real

gods are real Christians will tell us but how do they know just because they believe in him doesn’t automatically make him real god is not really there’s no evidence to prove it I have yet to see god in person once I see god ill be a believer until then nope. All there is to show that God is real is a book that has been around many and many of years that’s been edited multiple times.

‘People staunchly believe all sorts of things for poor reasons or no reasons at all. Also note that the actual existence of God, if God really does exist, is not proof that there is a God. A proof of X is a sufficiently rational demonstration of X that can be understood by people and hence believed by people’

‘Volzinger and Androsov calculated that a wind blowing at the speed of 67 miles per hour sustained overnight could have exposed a reef that existed close below the ocean surface. The Israelites could have then fled over the passage before the wind died down and waters rose again, blocking the way for pursuing Egyptian soldiers in their wheeled chariots. Volzinger explains that some 3,500 years ago, the reef would have been closer to the water’s surface so it would have been exposed for just the right amount of time'(Volzinger and Androsov 1)

people can believe in what they want there’s nothing wrong with that but if he is real show me proof.

Move this paragraph wherever you think is most appropriate -5

There’s the bible which says has been around for a long time and is the document of gods true existence the religion is based off faith. ‘There is enough light for those who only desire to see, and enough obscurity for those who have a contrary disposition.'(Heidemann).

They’re wrong because the bible has been edited a thousand of times by a lot of people there is different versions of the bible talking about the same person but different stories so there for you could never really know if it is real or not.

Move this paragraph wherever you think is most appropriate

What assertion does the other side make?

What evidence do they use to support their assertion?

Why are they wrong?

My family is a typical Christian family. (2019, Nov 15). Retrieved from https://studymoose.com/my-family-is-a-typical-christian-family-essay 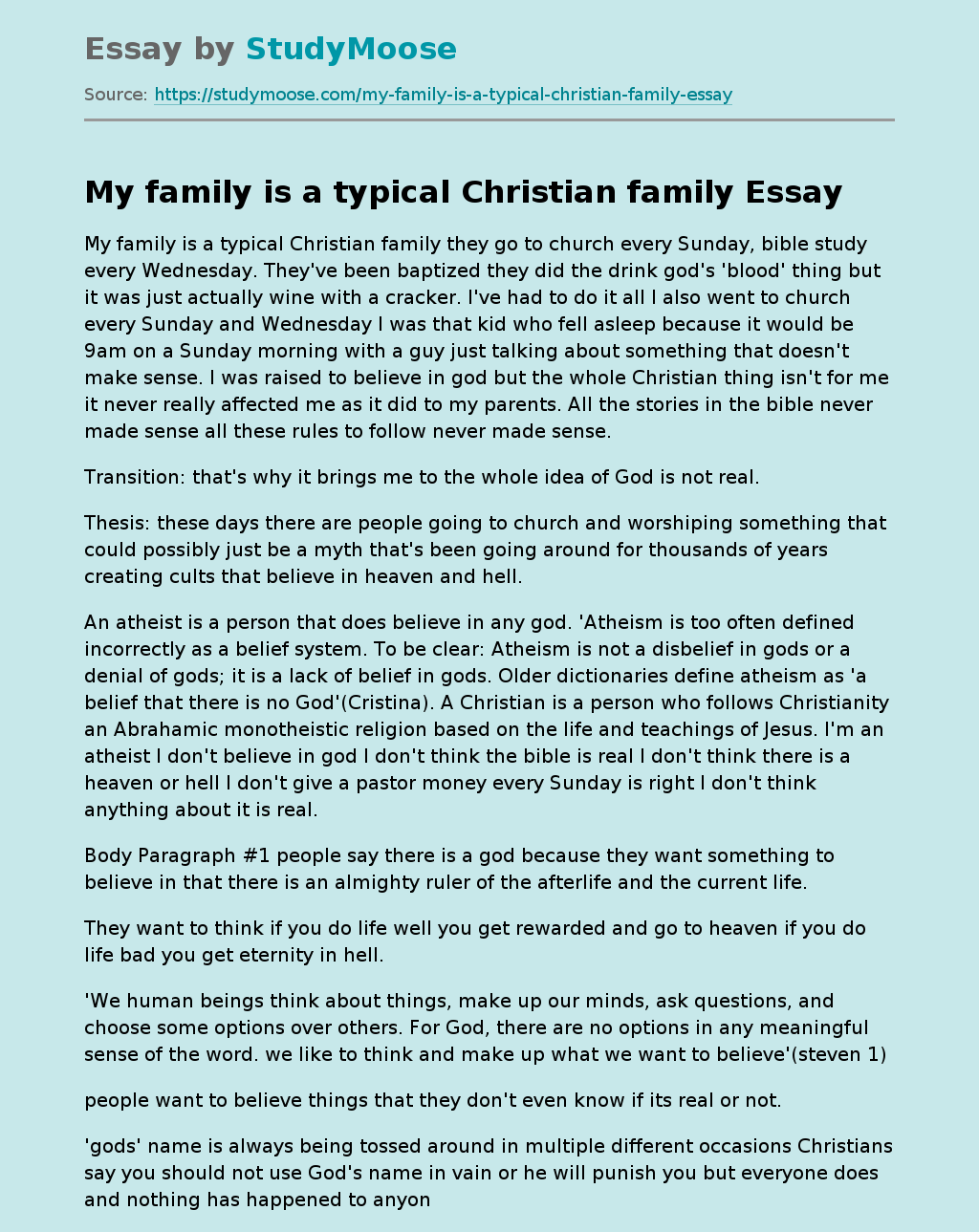