Culture is embedded in the high peaks of Nepal, tradition flows with its rivers, art traverses through its valleys and religion lies in the heart of its people. Nepal, in short, is a country where art, culture and religion are a part of life of the inhabitants. People celebrate every moment with aroma, adding novelty to the traditions without affecting their essence.

Art of Nepal The art and architecture of Nepal is deeply influenced by the religion. Unique craftsmanship can be found in temples, architecture, shrines, fountains and the design of religious objects.

Turn in your highest-quality paper
Get a qualified writer to help you with
“ My Country Nepal ”
Get high-quality paper
NEW! AI matching with writer

Art and religion is so deeply interlocked that it is impossible to separate the one from the other. All art forms express both Hindu and Buddhist iconography.

Buddhism in Nepal Buddhism, the fourth largest religion all over the world, has strong roots in Nepal. Buddhism in Nepal dates from the birth of Siddhartha Gautama himself, therefore Buddhist influences are evident on the culture of Nepal. Nepal is the meeting point for Indian and Tibetan Buddhist traditions.

Culture of Nepal The culture of Nepal is a assemblage of music, architecture, religion and literature. This mountain kingdom is multi-ethic and multi-lingual. The land is rich with unique cultural groups like Tharu,Yadav, Ahir, Newars and others.

Food of Nepal Nepalese are great foodies and their food varieties are hot, spicy and nutritious. Newari and Thakali cuisines are the original taste of Nepal. Otherwise, Nepalese style of cooking has been influenced by Indian and Tibetan cooking. Dal Bhat tarkari is the staple food of Nepal.

Meat curries and monos are the hot favorites among the tourists.

Music of Nepal The rhythm, beats, bounce of Nepali traditional folk and classical music is spiritual enough to sooth you and entertaining enough to cheer you. Music is associated with every event in Nepal, then be it birth, marriage, festivals or national events.

People of Nepal The people of Indo-Aryan community are the original inhabitants of Nepal. No wonder their descendents form the majority even now. Other major groups in Nepal are Gurungs and Magars who live mainly in the western region; Rais, Limbus and Sunwars who live in the eastern mid hills; Sherpas, Manangpas and Lopas who live near the mountains of Everest, Annapurna and Mustang respectively.

Religion of Nepal Religion in Nepal is not only a system of social coherence based on certain rituals and beliefs, rather it is the binding force that ties the mountain kingdom together. Though Nepal is famous, as the world’s only Hindu Kingdom, equal respect is given to other religions as well. Buddhism is the second largest religion followed in Nepal, others being Tantrism, Islam and Christianity. 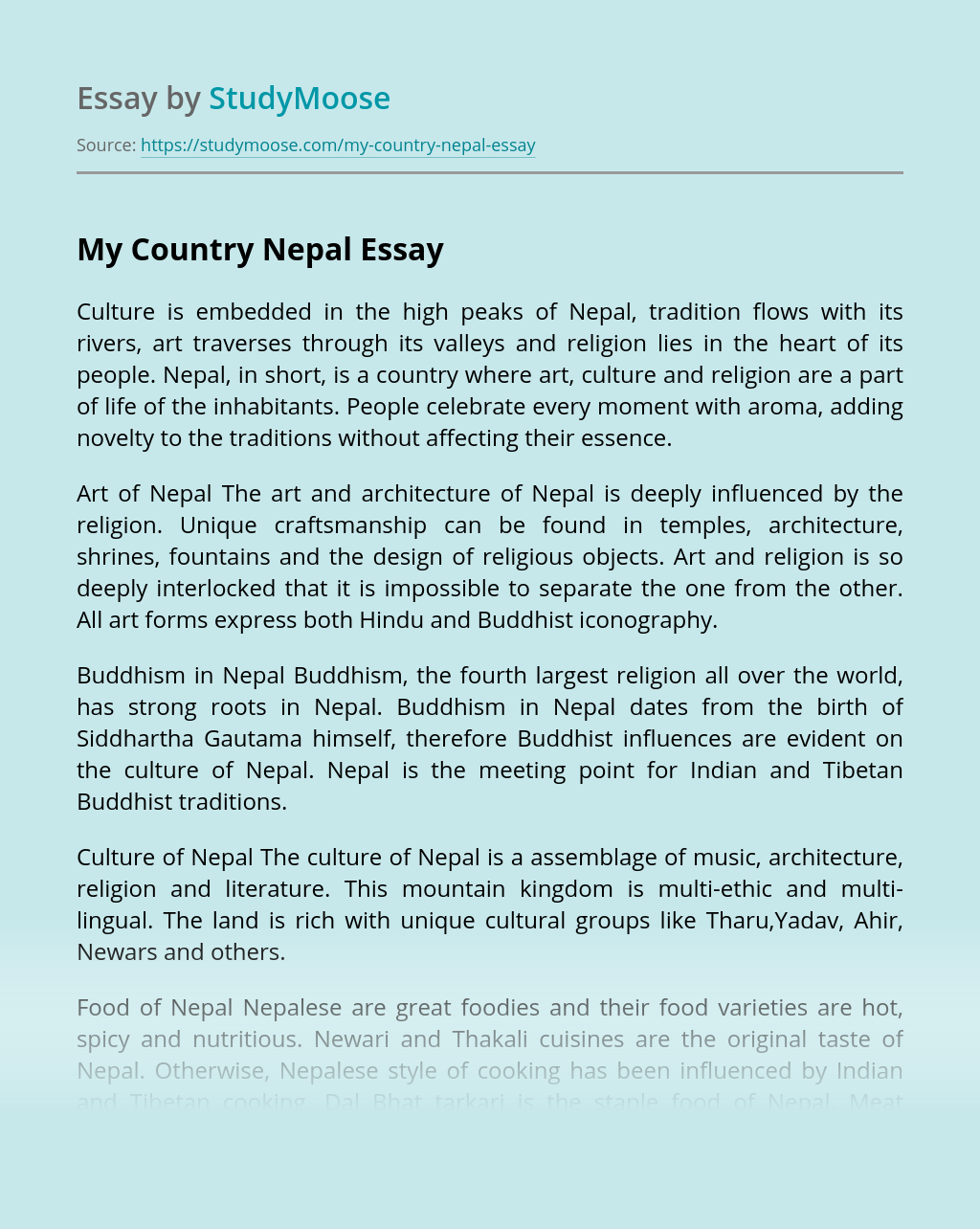 Turn in your highest-quality paper
Get a qualified writer to help you with
“ My Country Nepal ”
Get high-quality paper
Helping students since 2015
Stay Safe, Stay Original