My bondage and my freedom summary

His grandmother was his life, but when he was seven years old she took him to live on a plantation of Colonel Edward Lloyd. Which separated him from his family, brothers and sisters? “Being a slave made them strangers.” Pg(48) he wrote that he was told that his master was his “father”. When he describes his younger years on the plantation his mother died and his aunt ester was whipped. When he was a bit older he lived in Baltimore he had a new master Hugh Auld who was a ship carpenter.

Don't use plagiarized sources.
Get Your Custom Essay on My bondage and my freedom summary Just from $13,9/Page

Fredrick says that he was treated like a pig on the plantation. His master’s wife was teaching him how to read and when his master found out he wanted it stopped immediately. He thought that slaves should know nothing.In the chapters 13-20 at the age of 15 is when he fially escapes freedom. “One trouble over, and on comes another,” Douglass says “The slave’s life is full of uncertainty” (pg 170 his particular period of uncertainty begins with the death of Captain Anthony, who, Douglass notes, had remained his master “in fact, and in law,” though he had become “in form the slave of Master Hugh.

Captain Anthony’s death necessitates a division of his human “property,” and soon afterwards, Hugh Auld sends Douglass to work at his brother Thomas’s plantation ). When Master Thomas finds that severe whippings do not cause “any visible improvement in [Douglass’] character,” he hires the young slave out to Edward Covey, who is reputed to be “a first rate hand at breaking young negroes” (pg 203).. The oxen run away, and Covey punishes Douglass harshly. But Douglass does not intend to be broken either, and his year with Covey culminates in a violent fistfight with the overseer. In 1835, Douglass leaves Covey to work for William Freeland, “a well-bred southern gentleman,” noting that “he was the best master I ever had, until I became my own master” (pgs 258-268). After an uneventful year, Douglass devises his first escape plan, conspiring with five other young male slaves (pg 279). However, their scheme is detected, Douglass is imprisoned for a time, and finally Thomas Auld sends him back to live with Hugh (pg 303).While working in a Baltimore shipyard as a hired laborer, Douglass is savagely beaten and nearly killed by four white ship carpenters.

Nevertheless, the job allows Douglass to save some money, finally enabling him to make his escape in September 1838. Douglass does not reveal the full details of his escape in My Bondage and My Freedom, fearing that he might “thereby [prevent] a brother in suffering [from escaping] the chains and fetters of slavery” (p.323). (He narrates his escape in Life and Times of Frederick Douglass, published well after emancipation). Instead, Douglass skips to his first impressions of life in New York: “less than a week after leaving Baltimore, I was walking amid the hurrying throng, and gazing upon the dazzling wonders of Broadway” (p. 336)Chapter 24 describes Douglass’ tumultuous Atlantic crossing on a ship full of slave-owners, his exploits as a traveling lecturer in England, Ireland, Scotland, and Wales, and the “many dear friends” abroad who collaborate to purchase Douglass’s freedom from Thomas Auld in 1846 (p 373). Chapter 25 recalls Douglass’s plan to start a newspaper after returning to the United States, which he realizes with the help of his “friends in England” despite some unexpected resistance from his abolitionist “friends in Boston” (p 392-393). This difference of opinion was emblematic of a larger rift between Douglass and the followers of William Lloyd Garrison over various points of political philosophy.

Determined to circulate his newspaper from a neutral location, Douglass begins printing The North Star in December 1847 and moves his family to Rochester, New York, in 1848. He concludes My Bondage and My Freedom with a revised mission statement: “to promote the moral, social, religious, and intellectual elevation of the free colored people . . . to advocate the great and primary work of the universal and unconditional emancipation of my entire race” (p 306)

My bondage and my freedom summary. (2016, Mar 04). Retrieved from https://studymoose.com/my-bondage-and-my-freedom-summary-essay 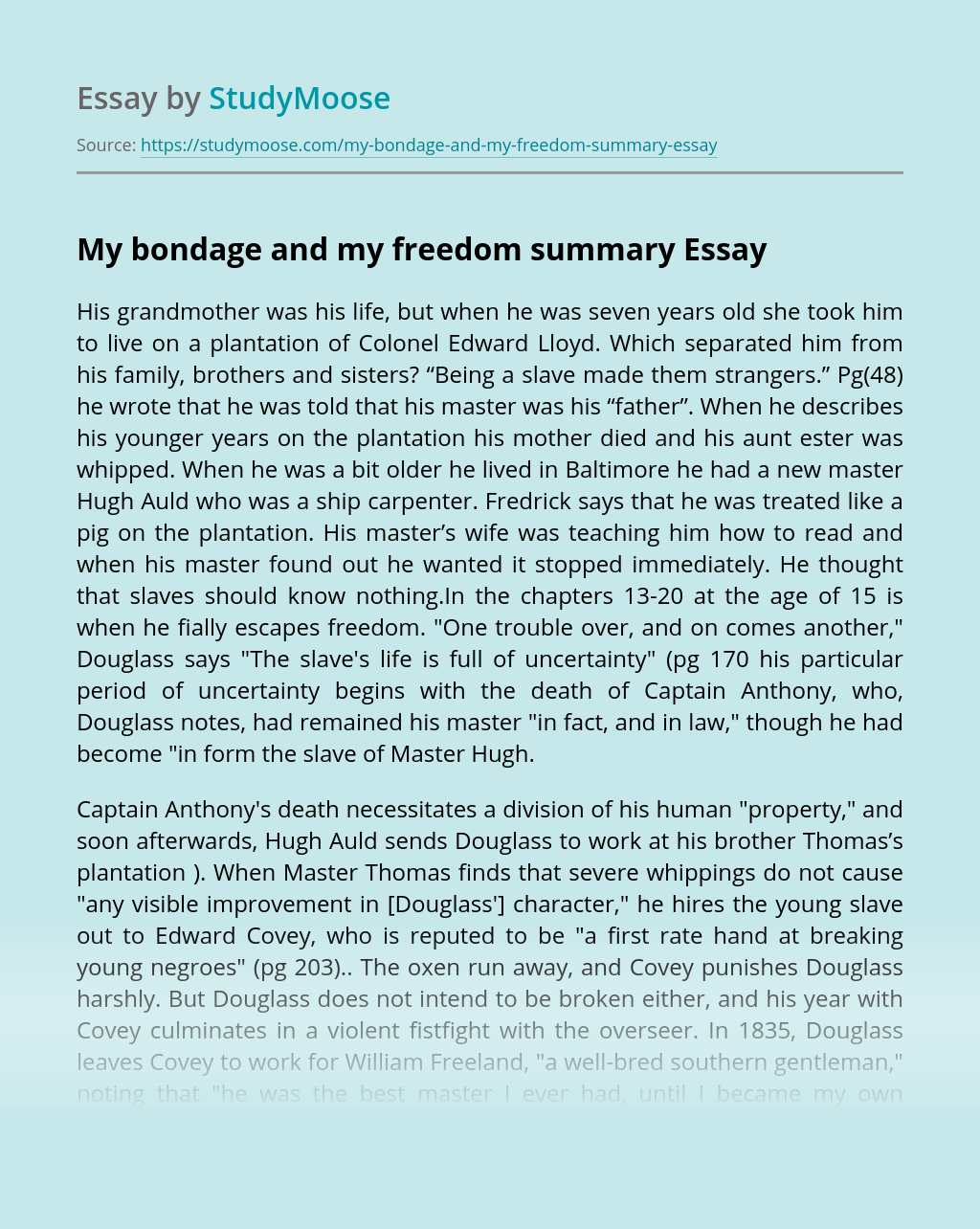 IntroductionDue to the advancement of technology and innovative

Introduction Due to the advancement of technology, and innovative ideas the increased competition among businesses is rising. Almost every company is faced with competitive pressures. Despite this challenge, the company must stay competitive to remain profitable. As a result of this challenge among companies, it has turned out to be important for companies to define...

Wellbeing of children and young people

1.1 outline current legislation, guidelines, policies and procedures with own UK home nation affecting the safeguarding of children and young people. The current legislation, guidelines and policies and procedures state that children have the rights to protection from abuse also they have the right to express their view and to be listened to as well...

Get Essay
The Odd Couple

The different beliefs, characteristics and looks of different ethnicities give more diversities in a place. The differences in cultures create color in every region. It allows people to understand each other and respect each other’s differences and beliefs. On the other hand, these differences are emphasized too much that instead of being the key to...

What Is Computer Software? When you think of a computer imagine a machine made of two parts. The first part is the computer hardware, the physical parts of the computer that you can actually touch. Some examples of hardware are disks, monitors, boards, chips, etc. Hardware does all of the physical work of the computer,...