MWDS : The Picture of Dorian Gray

Oscar Wilde was born on October 16, 1854 to Sir William Wilde and Jane Wilde, the second of three children. Wilde studied at Oxford, and joined the Freemasons in 1878 after failing to join the Oxford Union. After graduation, he went home to Dublin and began writing poems. The Picture of Dorian Gray was his first and only novel. Wilde married Constance Lloyd in 1884 and perished on November 30, 1900 to cerebral meningitis. Historical Information As the second industrial revolution went on, steel, railroads, and electricity allowed for the economic growth of the United States and Western Europe.

Don't use plagiarized sources. Get your custom essay on
“ MWDS : The Picture of Dorian Gray ”
Get custom paper
NEW! smart matching with writer

The standard of living rose dramatically, and health concern and sanitation caused infection and death rates to drop greatly. During the decade, gothic novels, like Dr. Jekyll and Mr. Hyde, written by Robert Louis Stevenson, were published. Characteristics of the Genre The setting, atmosphere, and emotions are dramatic and gloomy. Dark suspense and mystery are strongly tied to gothic novels, along with the supernatural.

Plot Summary The Picture of Dorian Gray is an American novel centered on Dorian Gray, a handsome wealthy young man living in the nineteenth century in London.

Even though Dorian is a very intelligent person, he often finds himself easily manipulated and this fault will ultimately lead him to failure. Dorian has his picture painted by a friend named Basil, and when Dorian meets his friend Lord Henry Wotton, his life will soon collapse. Dorian begins to believe that youth and beauty will bring him everything he desires, so he makes a wish that the portrait will age, and he will stay forever young and handsome.

The picture begins to show Dorian’s truths portraying him as a demon-like creature, and eventually he will come to realize all the terrible sins he created over fourteen years. After Dorian realized he is the result of numerous deaths, he retreats to his old school room to stab the picture in the heart. This relieves him of all his sins and the picture and he switches back, finally showing Dorian’s age.

Author’s Style Wilde writes with strong details and vocabulary. His tendency to write through dialog is evident, as the growth of the characters and plot are through spoken words. Example “‘He has a simple and a beautiful nature. Your aunt was quite right in what she said of him. Don’t spoil him. Don’t try to influence him. Your influence would be bad. The world is wide, and has many marvelous people in it. Don’t take away from me the one person who gives to my art whatever charm it possesses: my life as an artist depends on him. Mind, Harry, I trust you’” (12). Basil describing Dorian’s importance to stay innocent from Lord Henry.

1890’s London, England, in the upper west side. Dorian moves from the west (wealthy) side of London to the east (decrepit), representing his double personality of being a gentleman, but also a skulker. Significance of the Opening Scene A background of Dorian Gray is built in the first chapter, giving him a mysterious and wildly curious air. The two most important characters that influence Dorian are brought up immediately and are given strong personalities through their dialog. The plot has strong ties with what is talked about in chapter one. Major Symbols, Motifs, Images Sibyl Vane: innocence, purity, and naïvety. Her interaction with Dorian caused her life to end shorter than it should’ve been, and Dorian wouldn’t be effected as strongly should he had not met Sybil. Significance of the Ending/Closing Scene The novel ends and begins with a painting. Dorian has evolved for the worse and decides that destroying the painting would destroy the image of his disgusting, corrupted soul, but inadvertently kills himself. The picture gives Dorian all of his monstrous deformities, while the painting is restored to the original, untouched beauty. Possible Themes 1. Innocence is fragile and impressionable 2. Transformation doesn’t just have to be for the better; it can go for the worse and progress to a form of despicable terribleness. 3. Eternal youth is something humans strive for, but once attained, it can become to much of a burden and have too much consequence to bear.

MWDS : The Picture of Dorian Gray. (2016, May 16). Retrieved from https://studymoose.com/mwds-the-picture-of-dorian-gray-essay 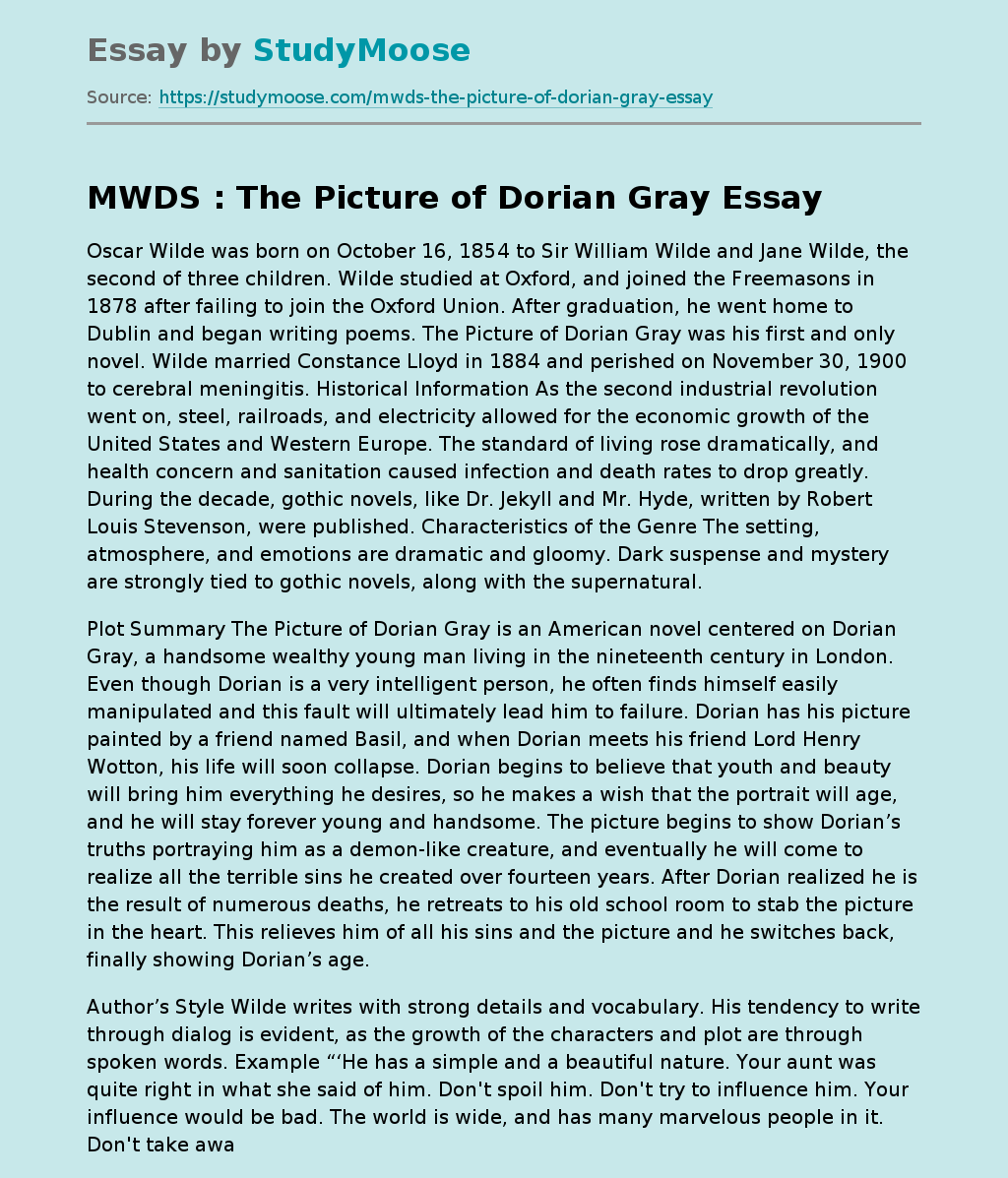