Whenever Declan McKenna songs come out from the radio, I audibly remember the times when I found out about my individuality through music. The atmosphere, the chills still runs out in my mind that day. It was a normal summer break day in a local vintage coffee shop, breezy air smoothly swept through the trees while the gloaming light shined through my eyes as I sat alone near the roof drawing my sketchbook while I lifted up my coffee cup, gently petting those feral cats that live there.

It was my favorite place to escape the fast-paced world I live in.Growing up in a traditional Vietnamese family, I have always been expected to be a successful person who will go to a top university and get a well-paying job or being a good future housewife, I was struggling at that time to fight for my passion which is to be a filmmaker. As I blanked out, mind full of disquieting thoughts; suddenly, the sounds of raw electric guitar from Declan McKenna’s debut album skimmed through my earphones.

Proficient in: Culture And Music

Humongous was the first song that came out from his album which was highly recommended by my friends. Declan’s crunchy voice, the same guitar riff but sounds so divergent with the sarcasm lyrics to adults or the people who against him I’m big, humongous, enormous and small, and it’s not fair that I am nothing and nobody’s there (Genius) With the bitterness and frigid of his singing voice, perfectly mingle with the sound of coffee grinding from the barista; I could feel the empathy through the song, rapidly ease my mind for a moment.

I knew what I had to do later. And that was the first time I can understand the rise of young Indie Rock artists of generation Z.So now here I am, a first-year university student who is majoring in media and films; I had participated in various arts and film projects through the interest in music and film communities when I was in my gap year in Vietnam.

Somehow, a normal song can have a big influence on my identity as well as my purpose of life. Also, I had given more attention to the young independent artists of our generation. But how of these formations were made? In order to tackle this circumstance, numerous ideas will be made under this statement.One of the primary notions is the Does everyone have a musical identity? Reflection on musical identities’ research which was written by Theodore Gracyk. According to Theodore, It is clear that there is a special tie between music and identity, especially with the adolescent. For instance, if young teenagers keep on listening to music as a leisure activity, it could make an essential improvement to the process of discovering one’s identity. Adolescence is one of the most crucial time to progress the maturation, genuine hypothetical and abstract thinking which can enhance young adults cognitive abilities.

With a huge interest in music, one can construct a sense of self to the mental processes such as the pleasure of finding a stable state of mind or exploring an individual’s emotion. Also, Theodore claimed that one can seek themselves through an abstract object that can be seen in music in many cases. For example, when a listener takes pleasure in hearing the same music in different circumstances, or one’s must grasp the same musical work within different dimensions or objects. However, music is a relational connection which can cooperate the multiple selves in diverse context and surroundings. Furthermore, Theodore had also pointed out the research of Tia DeNora in Music and self-identity in the identity and relation through music. To be specific, Tia has explored the respondents used music for listeners to remember the incident in their lives. By repeating music or fortuitously plays a song that linked to a crucial event, it can bring the nostalgic or reminds listeners to past experience. This brings me back to what influence me when I was listening to Humongous for the first time, I can still feel the raw emotions of empty and lonesome, how the wind blew and how the taste of my coffee cup exactly like the first time.

Declan helps me to reconstitute the past experience which is the reflective movement from time to time through music. Also, there is a link between the musical material and the concept of self-identity. Here, the music provides a material rendering of self-identity; a material in and with which to identify identity (Tia DeNora) this concept had strongly assure me due to the influential of Humongous to my purpose in life; studying media and films.Nevertheless, how can I approach to Declan McKenna or the engagement with the young independent indie artist? Due to the development of technology, people can easily access to the mass media such as television, radio, especially the Internet and other social media apps such as YouTube or Spotify. Popular music can be quickly found through the top charts or the recommendation or the communities that we related to. This brings us to a second theory by Cenk Celasin; The effects of musical elements in mass media and the Internet on the Social Development of Children and Adolescents.

Cenk explained that adolescents had always sharply related to the musical elements which were widely spread by the Internet through music groups or communities that have the same taste or genre in music with individuals or else we can describe as fandoms. In particular, this component can be clarified in the Fan cultures (Buettner, Angi; Jutel, Thierry; Schirato, Tony; Stahl, Geoff. 92-109) Fandoms are using various type of media to communicate with their admire to a particular show, celebrity or bands. Besides the popular culture that targeting individuals through the mass media, there are more underground or alternative media forms such as fanzines or creating their own community for themselves.

Take BTS fans (ARMYs) as an example, they are one of the largest fandoms of our generation. With the effective use of online social networks of the fans to promote the group, BTS are not merely become the most influential K-pop group but also one of the most successful boy band at the moment. This will lead us to the Fandom, Music and Personal Relationships through Media: How Teenagers Use Social Networks (Lacasa, Pilar; Mesndez Zaballos, Laura; de la Fuente Prieto; Julin. 45-67) Fans developed distinct strategies for promoting artists and contacting with people who have the same interest. Thus, online fandoms also had a meet-ups offline where they could share more about their personal interest and daily concerns.

Along with my case, I have been broadened my knowledge to the Indie communities through Facebook and Spotify; without the suggestion of my online-friend and the mass media, I would not listen to Humongous and became the person I am today.It is undeniable that popular music culture has become one of the most essential impacts in our late modern society due to its influence on people, especially with the rise of online fandoms communities and the Internet streaming music. Thus, it can be seen as the mirror for self-perception in common practice of identity work in daily life (Tia DeNora 146) Indeed, the form of popular music has symbolized the subculture to the youth through the mass media; especially the Internet.

Looking back to the time when the sun shining through my eyes while those feral cats hovering around, I knew that I never would be here writing this reflection if I hadn’t been listening to Humongous. Almost all of my friends are the one who shares the same interest in music which also helped me to explore the world of young indie artists besides Declan McKenna such as Snail Mail, Gus Dapperton or boy pablo and they keep on drawing out “the me in music” to find my own prospect. 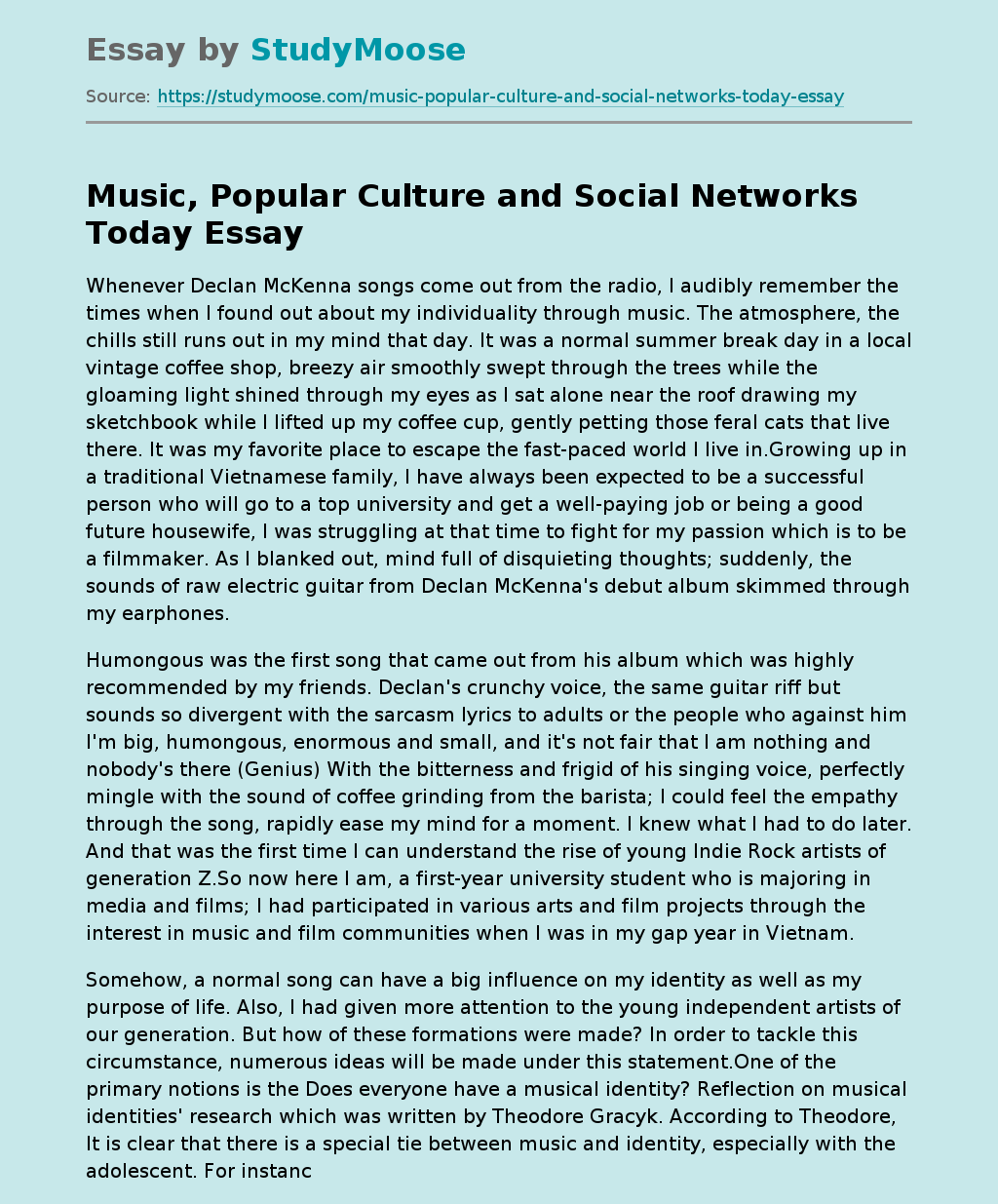