The highly respected jazz trio made up of pianist Bill Charlap, bassist Kenny Washington and drummer Peter Washington played for about an hour an a half. Their smooth melodies and precise playing worked perfectly together to give a great performance against the New York City skyline at Dizzy’s Club Coca-Cola. The trio opened up the show with a song called “I’ll Remember April”.

Don't use plagiarized sources. Get your custom essay on
“ Music Concert Report ”
Get custom paper
NEW! smart matching with writer

The song was not performed in a Broadway play or Jazz Club but rather the 1942 comedy Called Ride ‘Em Cowboy. Actor Dick Foran sang the song in what a critic at the time called, “I’ll Remember April’ was an oasis of sanity in the madness” (Wilson, McElrath, Tyle). Although an odd start the movie Ride ‘Em Cowboy proved to be significant in the Jazz community for another reason as well.

“ She projected a light, frothy, easy-going humor” in her performance of “A-Tisket, A-Tasket” (“I’ll Remember April (1941)”). This movie brought out just how significant jazz music was at the time because it made a mediocre film come to life. This was not Gene De Paul’s first time creating a brilliant jazz song.

The song entered the pop charts in the spring of 1942 after being recorded by Woody Herman and his Orchestra. The song did not catch on quickly because it differed in many ways from the typical pop song of the time. The melody and form separated “I’ll Remember April” the most from other music of the time. Songs of the time usually followed an A-A-B-A form, repeating a lot giving it a catchy tune. “I’ll Remember April” however, used a 48-bar A-B-C-D-A-B form making it seem long and dragged out compared to other popular jazz songs. Wilson, McElrath, Tyle) “

Beboppers Charlie Parker and Bud Powell were among the first to explore the song’s unconventional structure, followed by an influential 1950 recording by Red Norvo’s trio with Tal Farlow and Charles Mingus” (“I’ll Remember April (1941)”). The actually musicality of the song is quite complex with many chord changes and key changes. The song starts off in G but has a “false key change to Bb major during the first eight measures of the bridge” (Wilson, McElrath, Tyle). The tone of the song is major it moves rather step wise throughout.

The chord progression of the song is a twist and turn roller coaster taking you from a G to a E major back to the G then to a D7. This is important because it allows for many different substitutions of chords and improvisations. (Wilson, McElrath, Tyle) One of the most important and defining elements in Jazz is improvisation. It is expected that during any jazz performance one or more musicians will improvise. Improvisation is so common that most of the time a musician will not perform the same piece the same way twice.

However the freedom given to jazz musicians does come with some boundaries. “I’ll Remember April” gives much leeway to improvisation as long as they are “chosen carefully so as to at least imply a logical harmonic progression” (Wilson, McElrath, Tyle). Typical jazz instruments are the saxophone, clarinet, flute, vibraphone, trumpet, piano, guitar, banjo, tuba, double bass, bass guitar, vocals, trombone and drum kit. The size of the band can vary greatly in jazz however from an ensembles which can have as little as two people to big bands that can have as many as 30 people.

The Jazz show that I saw was a trio including a pianist, bassist and drummer. The setting in which I saw “ll Remember April” performed is much different then the setting I would have seen it in 1942. I saw the song be performed in a rather fancy evening setting at a Jazz Club where there was dinners and drinks being served. The club was modern and well designed. The backdrop behind the performers was a large window outlooking part of the New York City skyline.

Around 75 people went to the club to watch a well respected trio play their rendition of “I’ll Remember April”, as well as several other songs. In 1942 I would not have been able to go to a club one night and be served dinner as I listened to a band play the song. At first the only way to hear the song was in the movies it was featured in. The song was featured in the 1942 film Ride ’em Cowboy as I had mentioned earlier, it was also in the 1942 movie Strictly in the Groove and was again featured in the 1945 movie Eve Knew Her Apples.

It is not until later that I would have been able to sit down at a jazz club or concert hall to see the piece be performed. Anita Boyer recording of “I’ll Remember April” appeared on the album The nat King Cole Trio: The MacGregor Years 1941-1945 disc 4 (Wilson, McElrath, Tyle). Since then “I’ll Remember April” has been recorded hundreds of times by various artists throughout the years. “The song’s unconventional characteristics became assets, and it found favor as a bop vehicle” (Wilson, McElrath, Tyle).

The saxophone was also backed up by other instruments like the piano which gave it a full rich sound. The piano, bass, and drums of the Bill Charlap Trio also gave a good performance however I felt it lacked a clear “lead” instrument how the saxophone did for Parker’s rendition. One aspect I did like more in the Bill Charlap Trio’s version was the elongated piano solo. Solos are very important in jazz music and they occur often. Solos give artists the opportunity to improvisation keeping the piece fresh and giving it an element of surprise.

Throughout the Bill Charlap Trio’s performance there were many solos. In “I’ll Remember April” it was the piano’s time to shine. I enjoyed the solo because it showed off Bill Charlap’s talent and kept the piece exciting. An interesting aspect of his solo was he included a verse from Dorothy Fields’s “The Way You Look Tonight” which as I mentioned earlier gave inspiration to the writing of “I’ll Remember April”. Overall I enjoyed listening the piece live better than the recording because it allowed the music to “come alive” rather than just listening to a recording.

Going to the concert opened my eyes to what seems to be a whole new world. I was very anxious and nerve about what to expect when I went to the Jazz Club but when I got there I was pleasantly surprised. The music was entertaining and I loved the experience. Looking up the history of the songs continued to spark my interest. It is very interesting to see how music written seventy years ago is still influential and played in modern settings such as a Jazz Club. 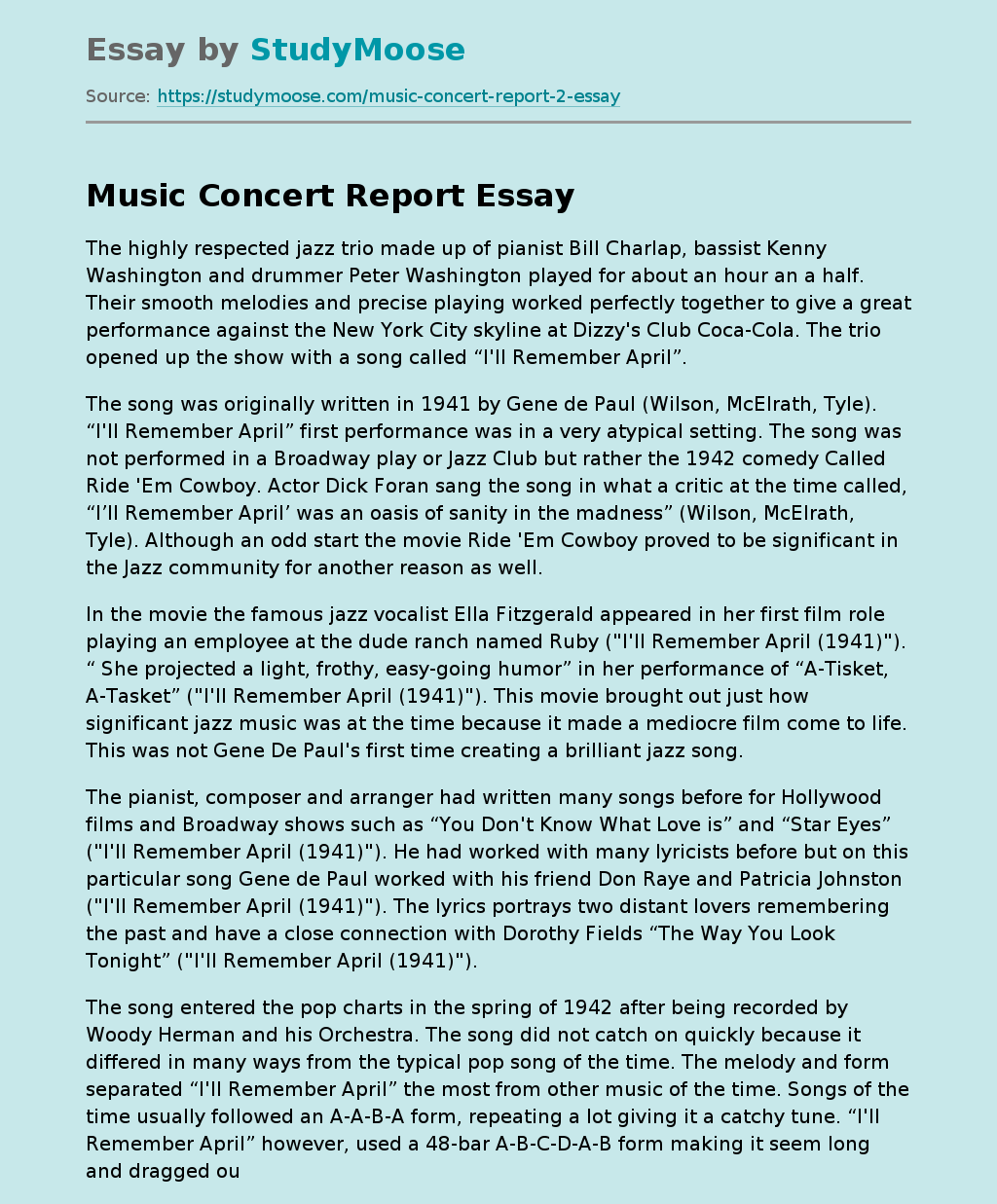