One of the most common musculoskeletal disorders is scoliosis. It is a disorder which causes an abnormal curvature of the backbone or spine. Since the spine normally has curvatures when seen from the sides, the curvature associated to scoliosis can be seen from the front. Scoliosis is two-times more predominant in females than in males. It can occur at any age but is more common in people over 10 years of age. It is hereditary, which means a parent who has scoliosis would have children with scoliosis (http://www.

Don't use plagiarized sources. Get your custom essay on
“ Musculoskeletal Physiotherapy Research ”
Get custom paper
NEW! smart matching with writer

The treatment for scoliosis is based on how severe the curvature is. The most common main categories of treatment are observation, braces and surgery. Bracing and surgery are the usual and customary management for scoliosis. However beneficial, they do not lack in complications like poor compliance for bracing and negative side effects for surgery. One major problem for the treatment of scoliosis is the lack of reliable prognostic tool (Romano & Negrini, 2008).

That is why patients are looking for alternative therapy, including chiropractic treatment, massage therapy, manual therapy or manipulation.

Chiropractors use these techniques based on anecdotal and historical information but there are no scientific evidentiary basis (Rowe, Feise. et al, 2006). The common conflict that arises here is the use of hands-on treatments, which are chiropractic treatment, massage therapy, manual therapy or manipulation, versus hands-off treatment. According to Thacker (1997), “There is still a tendency in most physiotherapy departments to follow a regimen of physiotherapy consisting of hands-on treatment, even though there is little evidence to suggest that this is of any long term use”.

In addition, Straus (2004) stated that “the clinical evaluation of healthcare services commonly places the evidence base at the heart of best practice. However, recent commentaries have criticized the drive for evidence based practice, as it ignores patients’ values and preferences and promotes a cookbook approach”. With these, this paper will discuss the effects of hands-on treatment (chiropractic manipulation, massage or manipulation therapy) in comparison to hands-off treatment specifically in patients with scoliosis. In general, massage is the manipulation of the soft tissue muscles using the hands.

According to the American Massage Therapy Association (AMTA), there are many advantages of massage, such as it improves blood circulation and movement of lymph fluid, strengthens the immune system, relieves muscle tension or stiffness, promotes deeper breathing, improves posture, fosters relaxation, satisfies the need for a caring touch, etc. But as stated by Kellie Heggie, there is one thing massage therapy cannot do, it is to increase the strength of the muscle being massaged. It just stimulates weak muscles or loosens the tight muscles.

As stated above, massage is not a cure for scoliosis but it is still being used as an intervention despite the fact that there are still not much scientific evidences. In addition, according to the study done by Morningstar, Woggon and Lawrence (2004), preceding chiropractic authors looked into the efficiency of a variety of physiotherapeutic modalities for the treatment of scoliosis, like Pilates (Blum, 2001), stretching and massage (Tarola, 1994), therapeutic exercises (Golembiewski and Catanzaro, 2001), orthotics (Lantz and Chen, 2001), and ultrasound or electric stimulation (Feise, 2001).

It is due to their unpublished clinical observation that over-manipulation may cause a certain amount of instability which could probably lead to the buckling of the curvature. Groundwork proof (Morningstar, Strauchman and Gilmour, 2006) proposed that these procedures may be useful for reducing the curvatures related to scoliosis. Another study by Romano and Negrini, (2008), focused on verifying the efficacy of manual therapy which is a commonly used approach. They studied 145 texts on the said topic but only three were relevant in their study.

Despite this not one of the three texts fulfilled their inclusion criteria since the three texts were a combination of techniques and approaches. They have concluded that the lack of scientific data hinders them to draw a definite result as to the efficacy of manual therapy as a treatment for adolescent idiopathic scoliosis. According to Freidel, Petermann, et al (2002), scoliosis has been associated with a low quality of life. Therefore reducing the curvatures without occurrence of other symptoms, such as pain, may be a worthy objective for clinical practice.

The traditional way of observation with no interventions does not seem to be preventive or corrective. As discussed above, manipulative techniques such as chiropractic manipulation or massage therapy has advantages but in addition to other rehabilitative techniques. Manipulative techniques alone are not encouraged as it could lead to addition injury to the patient. It is said that massage is not cure for the abnormal curvature but it is still continuously practiced as an intervention for scoliosis.

The mixture of spinal manipulation and different physiotherapeutic measures used to correct the curvatures related with scoliosis have been for the most part unproductive. In general, the objectives of these procedures are often to strengthen, relax or stretch musculotendinous and/or ligamentous structures (Morningstar, Woggon and Lawrence, 2004). According to a study done by Negrini, Grivas, Kotwicki, et al, (2006), they treat their patients for what they need for their future and their present too.

They advocate a comprehensive, multidimensional evaluation of the patients, to collect all essential information for a comprehensive therapeutic approach, which goes beyond x-rays in order to reach the person and their family. They believe that “Medicine is a scientific art: once science is not clear, choices are made according to individual and collective beliefs that should be better understood. This is particularly true in a field like adolescent idiopathic scoliosis, where currently does not exist definitive scientific evidence on the efficacy either of conservative or of surgical treatments”.

In relation to this, a pilot study on chiropractic manipulation was done by Rowe, Feise, et al, (2006). Their purpose was to explore topics on safety, treatment standardization, patient recruitment and compliance and inter-professional cooperation. It was a good pilot study but it focused more on the side of the practitioners and not on the service the patients’ received. The lack of studies or researches done in relation to manipulative techniques for scoliotic patients has led to a confusion of interventions and conflicts for the healthcare provider and the patients. Conclusion

The use of manual manipulation is a very common intervention done in the hospital by healthcare givers and family as well even without knowing if they could add insult to the patient’s injury. The advantages of manual manipulation in scoliosis are still unproven. Always keep in mind that without further studies only those who are trained can practice the said management. Educating the patient and his or her family on accepted interventions is also important to be able to promote a safe environment for the patient. Despite its usefulness it is still important that further study be done to back-up its results. 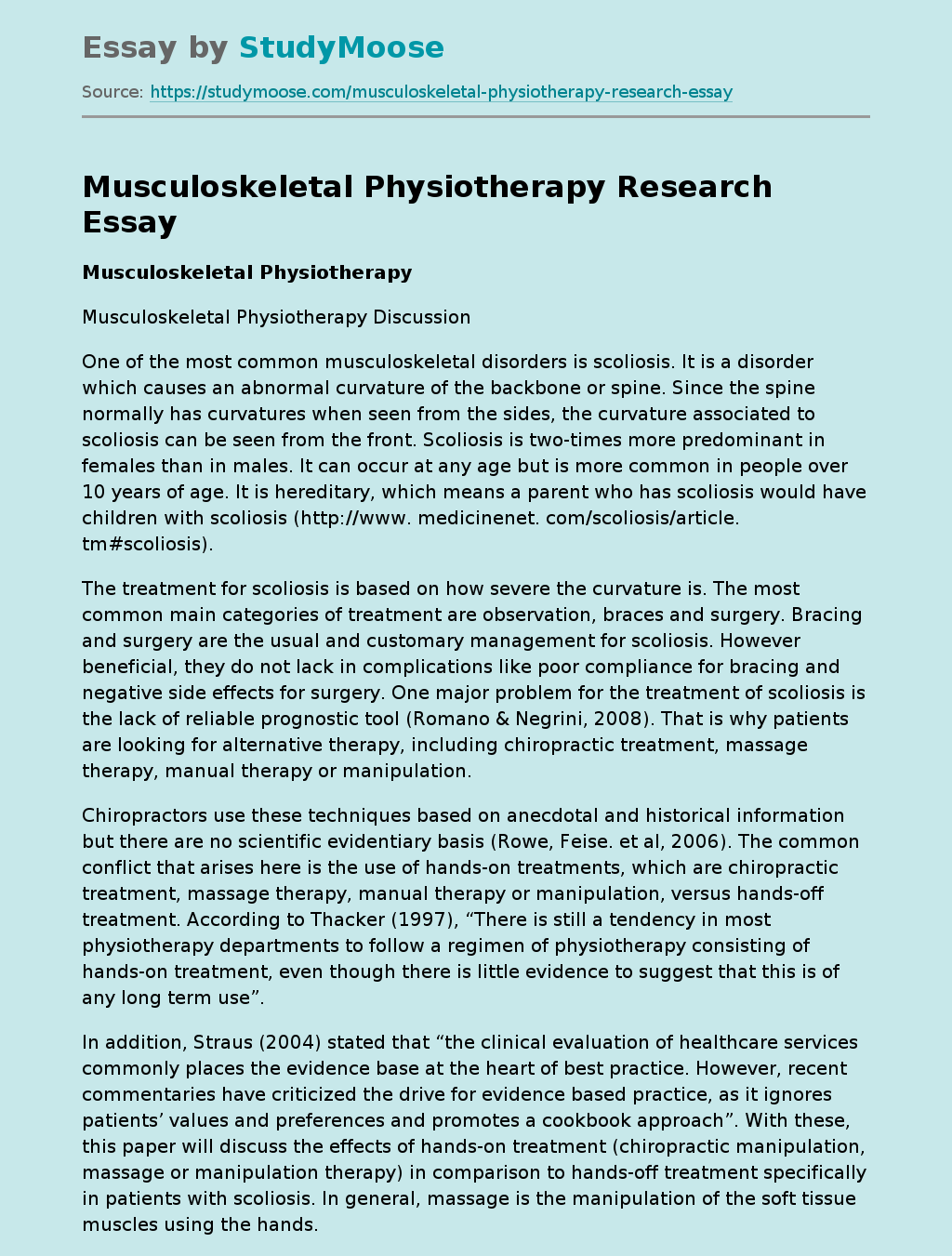